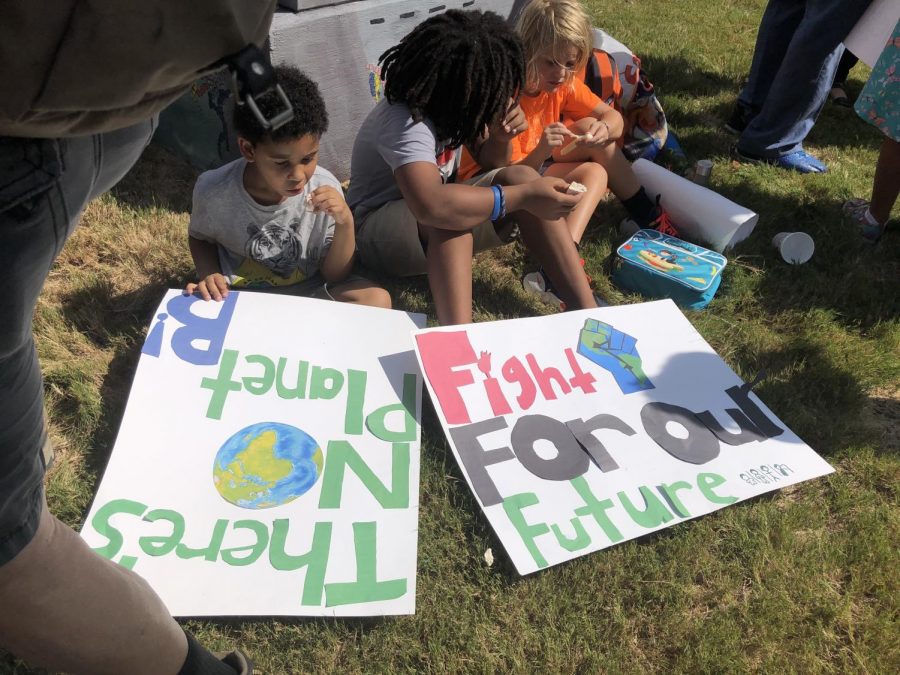 Children sit with signs at the New Orleans climate strike on Sept. 20. The strike was part of a week long protest that spread across six continents to raise awareness for climate change. Photo credit: Raegan Walberg

A boy around elementary school age stands on the neutral ground at St. Charles and Napoleon holding up a sign reading “Why are we going to school if we have no future?”

He and a gaggle of classmates from the Waldorf School of New Orleans joined Loyola students, retail workers, environmental non-profiteers and even priests for the New Orleans branch of youth climate strikes that swept the country on Sept. 20.

Among the protesters was Giovanna Pastrone, general studies freshman.

“Climate change is the most important issue in the world right now by far,” Pastrone said. “Every other issue’s very existence is contingent on having an Earth on which to manifest itself.”

Pastrone said she was motivated to strike after experiencing climate change first hand while backpacking through Alaska last summer. According to Pastrone, she witnessed melting glaciers and record-breaking heat, which she found alarming.

Among the Loyola community, she said she hopes to see a spreading of awareness for the issue of climate change among students, faculty and administration.

“I think the most important way Loyola can take action is by rallying students together to spread awareness about the effects of climate change to the greater community,” Pastrone said.

Friday’s coalition of activists in Uptown is only a small snippet of a larger-scale global climate strike. The strike started Sept. 20 spanning six different continents and will come to an end Sept. 27. The week-long activism overlaps with the United Nations Summit taking place in New York City this month.

Throughout the New Orleans protest, adults handed out fliers to those who drove past, as the students in attendance led chants.

“We are in the middle of a crisis,” said Jane Patton, who attended the protest with her three-year-old son. “And here in Louisiana we are actually contributing hugely to that crisis.”

Patton said the loss of wetlands is widely ignored by the state government, despite a football field worth of land disappearing every 100 minutes. The government’s inaction coupled with the environmental unsustainability of the land worries her for her son’s future.

According to environmental activist Ezra Ofliff-Libermann, the New Orleans September protest had ten times as many participants than a similar protest organized in May. The growth in the movement, along with the participation of young people, gives him hope that change is near.

“For too long our politicians and executives have said there is nothing we can do about the climate crisis and they are willing to profit off of the destruction of our future,” Oliff-Libermann said. “It’s time that young people lead the way and say that enough is enough we are going to fight for our future.”