Swimmers are excited to take on the new season 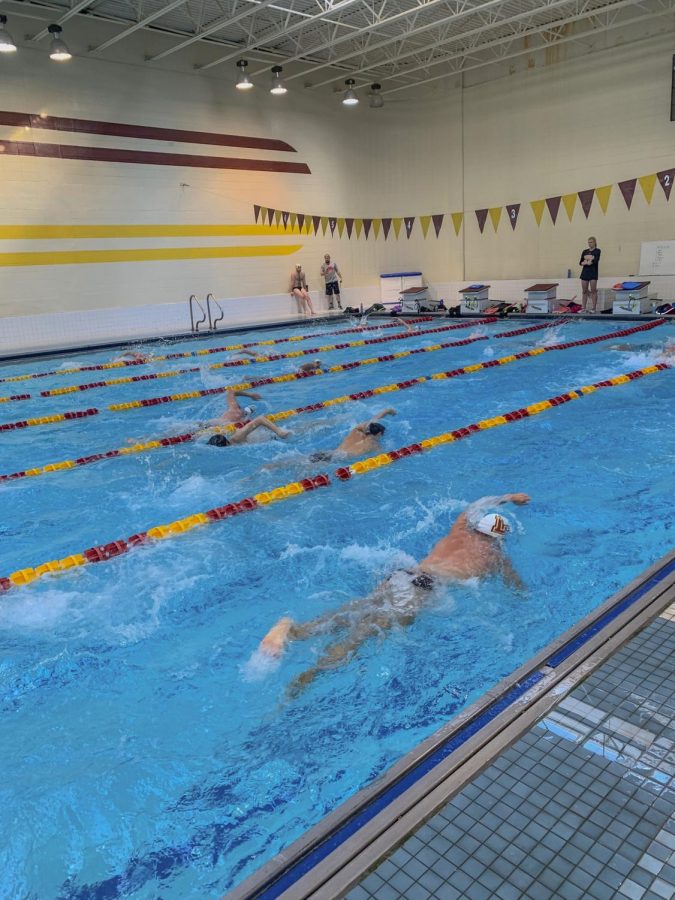 Men's and women's swim teams practice for their meet on Sept. 10, before the opening meet of the year. The teams opened their season at Ouachita Baptist University in Arkadelphia, Arkansas on Sept.21. Photo credit: Courtesy of Parker Elliott

Loyola’s men and women’s swimming represents all four classes of the Wolf Pack this year.

Biology junior John Tarpey, biology senior and captain of the men’s swim team said that these talented new swimmers on the roster this year have raised the bar.

“As a team, we have extremely high expectations for this season. Finally having four classes of swimmers — because this is our fourth year as a program — in addition to adding some very talented new swimmers to the roster this year have allowed us to have loftier goals than in the past for what we can accomplish,” he said.

The swim program began in the fall of 2016 with only eight swimmers building a team together.

“The pool deck is swarming with positive energy as we gear up for this upcoming season,” said mathematics sophomore and women’s team captain Katherine Szum.

Both players and coach agree there is a more positive energy coming into this season, despite this year being much more competitive than the others.

“This year most of our duel meets are against other teams from the National Association of Intercollegiate Athletics and our conference,” Szum said. “These are teams that we have competed against in the past which allows us to go in with the mindset that we can be competitive and hold our own against any of them. So far, our training and attitudes have reflected this goal.”

The positive energy on the team was evident in their first meet on Sept. 21. Loyola dove into the pool for their season opener against Ouachita Baptist University in Arkadelphia, Arkansas, resulting in a win for the men’s team and a close loss for the women.

The meet started with the 200 Medley relays which were taken by the men. The women relays came in second. During the meet, senior Paige Carter, mass communication junior, seized the 1000 freestyle followed by Ulrike Tovilla, business sophomore, winning the 200 freestyle. The 100 backstroke was dominated by the Wolf Pack on both the men’s and women’s teams with Mitchell Milosch, chemistry sophomore, and Kamryn Alexander, psychology junior.

Trey James, finance senior, Johann Kuipers, physics freshman, and Parker Elliott, business junior, made their names known in the men’s 100 breaststroke, followed by the men and women clinching the win in the 50 freestyle.

Milosch was a continuous powerhouse as he won the 100 freestyle. The men swept the 200 backstroke with seniors James, Tarpey and Blaise Wise, biology senior, placing first second and third. Junior Sam Vasquez, biochem junior, won the 500 freestyle in a close win against Ouachita. His performance was followed by English junior Jack Jackson’s win in the 100 butterfly. The meet concluded with the 200 Freestyle Relays after the sweep of the Men’s 200 IM with Chett Bell, psychology sophomore, Wise, and Moreno.

As for juggling sports as well as academic responsibilities, both Szum and Tarpey agree it’s all about time management and dedication.

“The only real way to balance the tough student-athlete schedule is being organized and getting as much work done early as you can,” Tarpey said. “You can’t always count on having that extra hour here and there that another student would because you have practice.”

Despite the extra challenges that studying and playing sports entails, Szum advised this year’s incoming teammates to remember the reason they wanted to swim at a top level. She said that oftentimes, new students can find themselves lost in all the unfamiliarity of the university setting, as schedules start becoming more packed and work piles up. However, this is not something that is bound to undermine the team’s success this season.

“We have a talented roster on both the men’s and women’s side, and we have the talent to do something special,” said Natal.

The next time that the swim teams will dive into the pool is this weekend. Both teams are traveling to Pensacola, Florida, to compete in the West Florida QuadMeet.