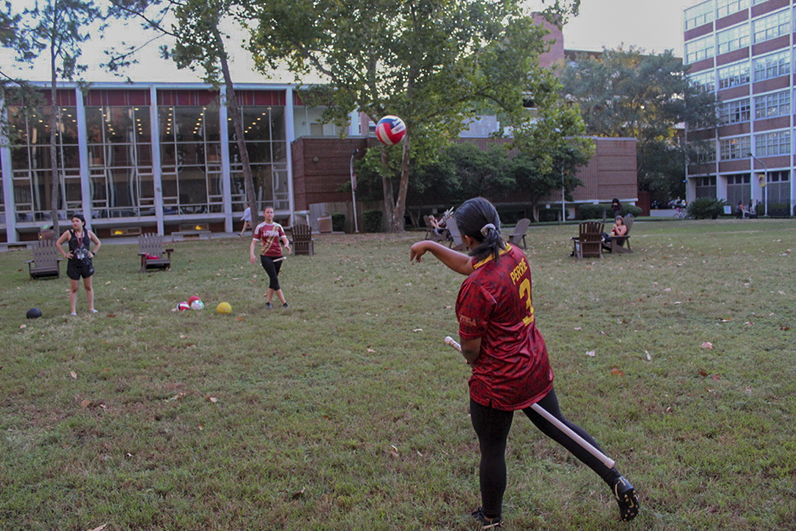 The quidditch team practices in the Residential Quad on Loyola's campus, Sept. 25, 2019. The team is expected to open the season in Victoria, Tx. on Oct. 20, 2019. Photo credit: Gabriella Killett

Quidditch is back, and its unique mixture of different sport elements — such as basketball, rugby and dodgeball — are getting players excited to start yet another season.

With the first tournament approaching, the players are preparing to try for a more successful run than in years past.

Although last year they were invited to regionals, Tori Perrie, chaser captain and business management junior, said that there were a few complications with the competition.

“The beater captain, Julia Signorelli, had injured her hand and other people were sick and had leg injuries,” Perrie said. “We didn’t have enough people well enough to play a full tournament. Otherwise, everyone would be exhausted and increase the chances of injury for the rest of the players.”

After the disappointing turnout, Perrie was determined to take better care of her team.

“Since this is a full contact sport, we taught people the correct way on how to tackle and be tackled,” she said. “We let people know how to distribute their body weight so that when they fall, they don’t sprain their neck or hurt their back.”

The team hopes to stand a fighting chance against other teams and possibly win a game or two. To do so, the quidditch players are switching up their practicing tactics.

“We are focusing a lot more on player position specific practices. I’ll take my chasers and we’ll do chasing drills and then the beater captain does drills with the beaters,” Perrie said. “We kept the chasers and beaters separate a lot last year, so this year, we focused on integrating them more at the end of practice. That way, they learned how to work well with each other during the game.”

After being on the quidditch team since his freshman year, Griffin Parr, music industry senior and utility player, has seen players come and go.

“We have lost a lot of players over the years,” Parr said. “This is a sport that significantly benefits if the team has high numbers. We’ve had tournaments where we had 10 players go against other teams with the full 21 player roster. It can be very exhausting for them,” said Parr.

The decline of players over the years opened the door for new people to try their hand at the sport.

“We have a very young team,” Parr said. “A lot of players are very new to this sport, so we were working on recruitment.”

The team will hit the road for their first tournament of the new season this month.