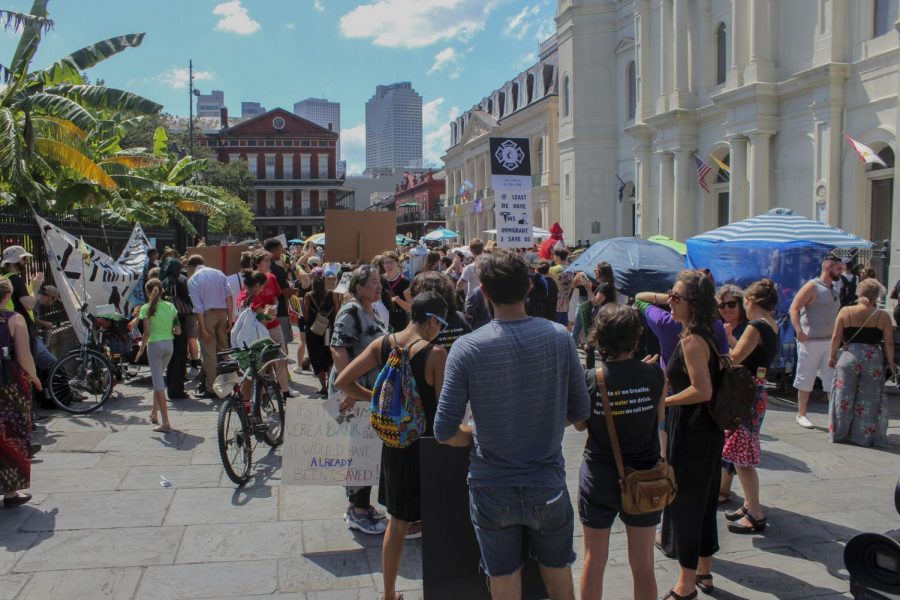 A crowd of strikers gathers in Jackson Square on Sept. 27. The crowd later marched thoughout the city chanting, "No more gas, no more oil, keep the carbon in the soil!" along with other chants.

Seeing 12-year-old Ida Schenck giving a speech to a group of striking New Orleans workers about the importance of climate change might seem odd or out of place, but actually listening to her speak tells a much different story.

“We really are fighting for our lives. This isn’t going to just go away if we slack on it. My generation is also told to dream big,” Schenck said in front of the group of sign-holding workers, “but how can we, if our collective future is so small?”

Schenck was just one of many speakers at the Global Climate Strike held in Jackson Square. She gave her speech alongside speakers like Tulane student Ashlee Pintos, a co-founding member of the New Orleans Hospitality Workers Alliance. Pintos spoke at the strike because she believes it is important to unite and educate the workers’ rights movement and the environmental movement in New Orleans, especially for the workers who do not have the privilege to strike and march.

“What’s most important to me is that we’re teaching people how to fight,” Pintos said, “We’re being visible. We’re educating people on the issues and what’s happening.”

Marilyn Amar, a member of Residents of Gordon Plaza, Inc., also spoke at the rally. Amar was fighting for a fully funded relocation from the city of New Orleans for the citizens of Gordon Plaza. Amar said how the EPA in 1994 conducted a soil test in Gordon Plaza where the organization found 150 toxins, 49 of which were cancerous. Amar also talked about how the city has not answered their resolution.

“We’ve been passed over by six mayors,” Amar said, “We’ve spoken to LaToya Cantrell, and she said she is working on a resolution. We only want a fully funded relocation which should’ve happened in 1994.”

The strike was just one of many similar events held in 150 countries across the world on Sept. 20 through the 27 in response to growing concerns about the future of climate change.

Schenck spoke alongside workers’ rights advocates and environmental advocates, and although she was much younger, she still felt like she had a place there.

“I feel like if people see these rallies; they know we aren’t going to give up,” Schenck said.

The strike also attracted college students like environmental science sophomore Nicole Gerke, who is the vice president for Students for Environmental Action and the treasurer for another college environmental organization, Students Step Up.

As a student at a New Orleans college, Gerke said that coming out to these kinds of events is very important for the New Orleans community.

“I think it’s very important that I come out here to help give a voice to the people who don’t have the opportunity to come out,” Gerke said.