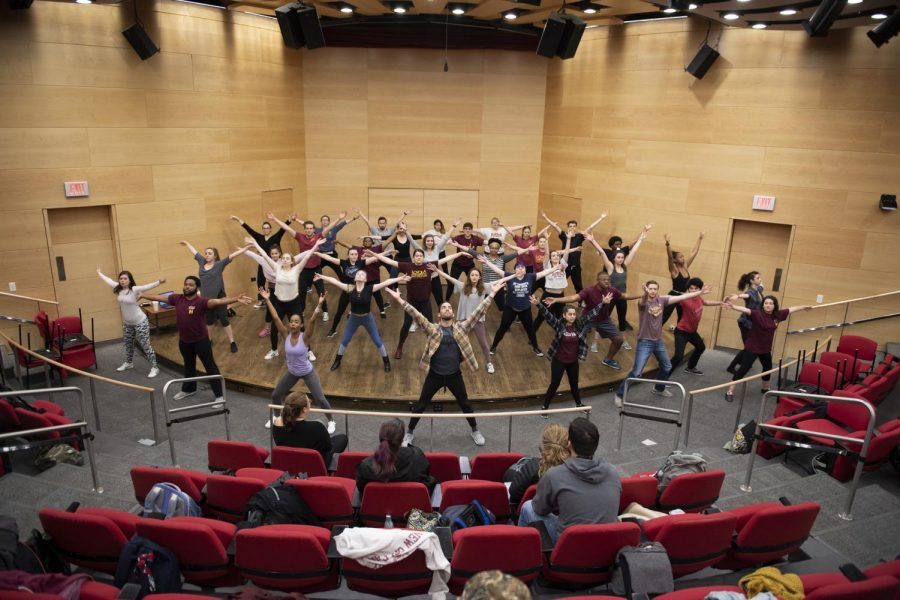 Theater students participate in a workshop in Nunemaker Auditorium, a state-of-the-art facility that brings artists, scholars, leaders and residents to campus in the renovated Monroe Hall. The Faith in the Future fundraising campaign raised $6 million for the Monroe Hall renovations. Photo credit: Courtesy of Kyle Encar

University President Tania Tetlow announced Tuesday that The Faith in the Future campaign raised more multi-million dollar gifts since it officially kicked off in 2011 than Loyola received in its first 100 years. More than 70,000 gifts by 20,000 unique donors helped fulfill the most successful fundraising campaign in the university’s history.

The record-breaking news comes just one week before the accreditation team from the Southern Association of Colleges and Schools — Commission on Colleges visits campus after the university’s year-long financial probation.

“It shows that even when we were having some struggles with enrollment and finances, the people who knew us best, our lead donors kept giving and stayed with us,” Chris Wiseman, vice president of university advancement said. “They didn’t turn their backs on us.”

Tetlow also expressed that the completion of the campaign was an important sign of Loyola’s growing momentum but is most impressed with the concrete benefits students will see as a result of the $101 million, including more than $36 million in new support for scholarships.

“Our students are diverse on every measure including economic background and for so many, these scholarships represent the bridge between what they can afford to pay and the opportunity to get the kind of hands-on small classroom excellence that Loyola provides,” Tetlow said.

The $36 million dedicated to scholarships is not limited, according to Patricia Murret, university spokeswoman. The money is endowed and invested, which means the scholarships will be drawn from the compounding interest over time.

In addition to the newly invested scholarship funds, the campaign also raised money for projects that have already been completed or will be finished soon.

• Center for Entreprenuership and Community

But it wasn’t always so clear how the anticipated funds would be spent. In the early part of the campaign, Derby Gisclair A’73, co-chair of the campaign and a member of the board of trustees, said he and The Rev. Kevin Wildes, S.J., university president at the time, sat with all the deans and asked them a simple question: what do you want?

“And like a kid in a candy store they started listing out everything,” Gisclair said. “It came out to about $450 million.”

Gisclair and the campaign team went back to the drawing board to prioritize and settled on a campaign of $100 million in order to double the university’s previous capital campaign.

In addition to the overarching targets like Monroe Hall and the Athletic Complex, each college settled on a set of initiatives.

Another goal of the campaign, according to Gisclair and Tetlow, was to build up a strong network of donors and alumni for future fundraising — something that Tetlow said has gone well. The university greatly increased both the number of supporters giving gifts as well as the average size of those gifts.

“There is research that shows if someone gives you at least $5 within a year after graduating, they’re much more likely to reach and want to give back to their university in the future,” Tetlow said. “And so we are doing more to engage more with our alumni every step of their lives.”

For Gisclair, the alumni are the safe bets when it comes to donating. The real challenge comes in targeting donors who have no prior relationship with the university.

“In a city like New Orleans, which is the biggest little town in the world, everyone gets asked for everything,” Gisclair said. “But the donors give to Loyola because they say, ‘I know it’s going to fund that scholarship, or that program, or that initiative.’ They want to see a tangible benefit of their generosity.”

During his time working on the campaign, Wiseman said he was most impressed with not only the growth in monetary gifts but the wide-scale support for the university’s future.

“At the beginning of this campaign when I would go to alumni events, the registration tables were almost always staffed by people who work at Loyola,” he said. “Now at the end, you see volunteers working the table, and that’s crucial to our future because people love Loyola and they’re willing to do things for us without asking for anything in return.”

Despite the hardships that plagued the university during the eight year fundraising campaign — drops in enrollment, administration turnover and a fiscal year financial probation — Gisclair said those hardships never negatively impacted the fundraising efforts.

And although eight years of fundraising, renovating and building has come to a close for this campaign, Gisclair made it clear that the work isn’t over.

“You’re never done. When we plant the flag and declare victory, everybody takes a deep cleansing breath, takes a long weekend off and then on Monday, we hit the ground and start what’s next,” he said.

According to Gisclair, those next steps will take the form of shorter, smaller, targeted campaigns for specific goals and tasks.

“If you took a break and you just didn’t raise money, all that goes away and you have to gear up the enthusiasm again,” Gisclair said.

Tetlow said the process of building up to a new campaign is enjoyable because it means an opportunity to once again examine what is most crucial to the university and how to get donors excited about those projects.

“It’s an exciting thing for the whole university and for me personally, it’s very gratifying,” Tetlow said. “But I’m obviously building on the work of Fr. Wildes and the incredible advancement staff.”

For Gisclair, $101 million raised is no doubt, extraordinary. But it’s the work of raising money for the next generation of leaders that brings him the most joy.

“Most people would rather be beaten with a bat than raise money, but actually, it’s the best job you can have on the board. It really is,” he said. “Every nickel comes back to you dressed as a dollar.”