Loyola alumna dribbles from the court to the football field 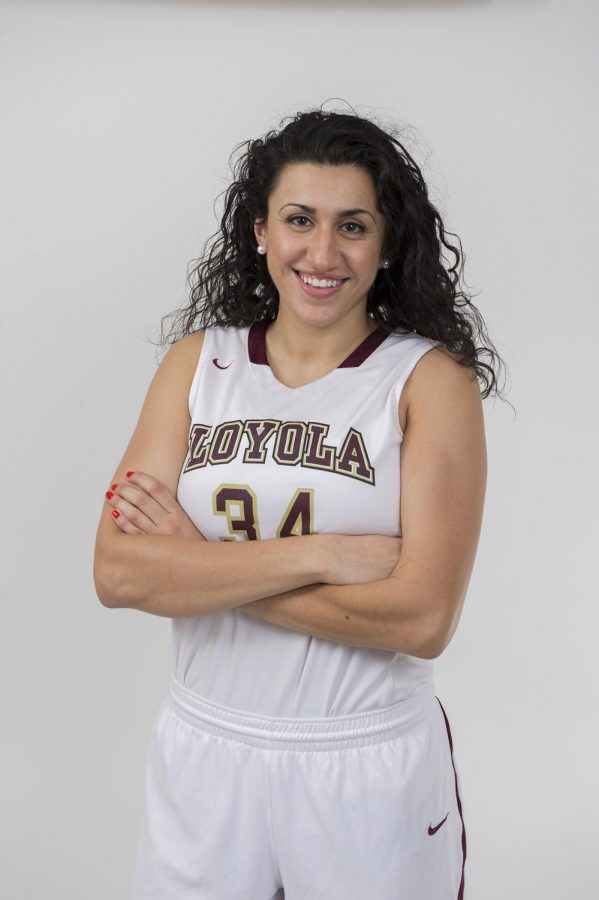 Caroline Gonzalez graduated from Loyola in 2017 with a degree in Mass Communication. She now works as the digital media cordinator for the New Orleans Saints and Pelicans.

Will Ingram and Lily Cummings

Loyola graduate Caroline Gonzalez used to wake up around 5 a.m. to have enough time to lace up her sneakers and get a warmup before taking the court in The Den. Now, she wakes up to spend her days along the sidelines of Saints and Pelicans games.

“It’s a surreal feeling. I remember getting chills the first time I was in the press box looking down during the National Anthem and realizing, ‘Hey, you are doing pretty well for yourself, kid,’” Gonzalez said.

Gonzalez said her demanding undergrad career as a student-athlete contributed to her success today and helps her balance working for two professional sports teams.

“That is one thing that I have heard a lot here is that people can count on me, so the time management aspect from athletics has carried over to the job I do now,” said Gonzalez.

Gonzalez graduated with a degree in mass communication in 2017. She also was involved with The Radio Television and Digital News Association and served on the student-athlete advisory committee.

“So, it’s just finding time in the day for all the things you prioritize,” said Gonzalez. “Everyone has the same 24 hours in the day, so it’s how you utilize those 24 hours and how you manage those 24 hours that is going to make the difference.”

Now, Gonzalez devotes her 24 hours to being the digital coordinator for the New Orleans Pelicans and Saints.

Gonzalez landed her job through networking, which began during her undergraduate years at Loyola.

Gonzalez completed an internship with WDSU-TV where she worked closely with sports reporter and Loyola alum, Fletcher Mackel.

“Fletcher was one of my biggest advocates, because I was always there early,” Gonzalez said.

Gonzalez credits Laura Jayne, the director of student services for the School of Communication and Design, that reviewed her portfolio during her senior year and encouraged her to connect with Doug Tatum, the assistant vice president of digital media for the Saints and Pelicans.

Gonzalez then set up a meeting with Tatum to review her portfolio. She said that she did not have any expectations going into the meeting.

“I knew it was a big deal because I was meeting with someone who worked with the Saints, but I didn’t treat it as the end-all be-all of my career. I just treated it as ‘Hey, this guy is someone who potentially could hire me. I need to take myself seriously. Maybe he will look at my work and tell me what I need to do and then go on from there,’” said Gonzalez.

Gonzalez accepted volunteer opportunities Tatum gave her throughout senior year, and two months before graduation was offered a part-time position. However, she originally turned down the position, as she thought she would be attending grad school in the fall.

“Then a week before graduation, some things fell through, and I realized I was going to be graduating and not coming back to Loyola,” Gonzalez said. “I called Doug and told him that I would be happy to come on part-time, whatever opportunity you have please let me know.”

After keeping in touch with Tatum throughout the summer, she was offered a full-time position in August 2017.

Before the job offer, and the offer to play basketball at Loyola, Gonzalez said she didn’t consider herself a top student.

“I was a C student in high school. I couldn’t care less about school in high school. I was just there to play basketball and get to the next level, but when I got to Loyola, I realized it was my last opportunity to make something of myself,” Gonzalez said.

She says her success would have been impossible without the high standards Loyola’s athletic department held her to.

“We were required to sit in the front two rows of our class. We were expected to keep a certain GPA, you had to be in study hall if you were under a 3.0 and you were held to a higher standard on campus,” Gonzalez said.

Gonzalez said she believes many of the skills she uses in her job today were learned in the classrooms at Loyola, but certain things she has had to teach herself.

“I wish that I would have taken advantage of all of the teaching opportunities and being well-versed in everything I could have been,” Gonzalez said.

Having respect and positivity are things Gonzalez said Loyola taught her outside of the classroom.

“Have a positive attitude about literally every single assignment given to you. Because of that positivity, I have gotten farther in this organization and in life than I could have ever imagined,” Gonzalez said.

Gonzalez’s positivity has gotten her exclusive access in the Dome during games, where she once walked across the stage to accept her diploma.