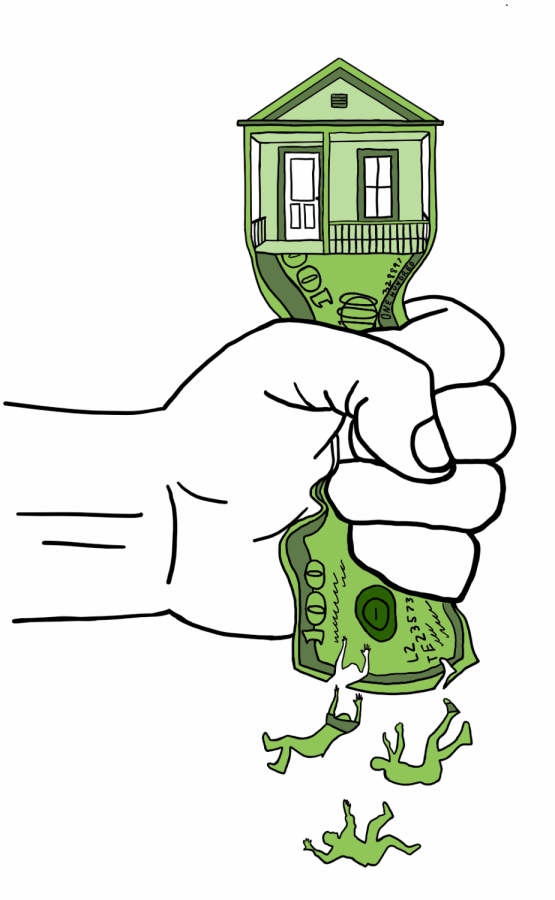 As we all know, New Orleans is a vibrant city full of culture and life. A city like no other, New Orleans is home to unique music, food and people. There’s a different air in this city, which attracts nearly 11 million visitors each year. Coming and going weekend after weekend, visitors capture the beauty and essence of The Big Easy, but only temporarily. New Orleans isn’t New Orleans without the people that live here. Its people give New Orleans the reputation that precedes it.

But, the people who make the Crescent City what it is are being pushed out.

There’s a housing crisis in this city. Locals are having to move away due to increasingly rising rent. Houses that rented for less than $500 pre-Hurricane Katrina, now cost close to $1,000 a month. Renters are being squeezed dry. Over half of the city is comprised of renters, and 60% of renters here are considered “cost-burdened,” or spending over 30% of their income on rent, according to Gambit. This leaves people with impossible choices like whether to pay rent or have dinner.

New Orleans received a letter ‘D’ for its efforts to provide affordable housing from HousingNOLA this year. On a state level, attempts to combat this problem have arisen; but alas, no concrete solution has become clear.

If you didn’t know, the Louisiana state election that just occurred a couple weeks ago featured a vote for a New Orleans Affordable Housing Property Tax Exemption Amendment. Also known as Louisiana Amendment 4, it would have allowed New Orleans to exempt properties with no more than 15 residential units from taxes for the purpose of promoting and encouraging affordable housing, according to Ballotpedia. The amendment was defeated with more than 60% of Louisiana voters voting “no.”

The defeat of Amendment 4 is a testament to the value people place on the gravity of this issue — or the lack thereof. Those 60% of renters in this city who are cost-burdened certainly could have used a helping hand. It’s easy to see a number like that and feel nothing. But 60% of this city is over 50,000 people. These are people with individual stories and burdens. People with homes they’ve had for decades, suddenly hopeless. People with faces and feelings. In the end, the fact of the matter is that people’s lives are at stake.

We, as college students, may view New Orleans as a temporary pit stop, a checkpoint in the journey of our lives. Sometimes, this causes us to view this city from the perspective of a visitor instead of a local and we may not focus on the long-term viability of New Orleans. Once our sophomore year is over, we all run to find places to live off-campus. While many of us stay Uptown, some of us become renters in areas like Hollygrove, where locals are being kicked out of their homes for people that can afford the higher prices, like us.

We are unintentionally contributing to the problem. There isn’t much we can do about that, and that sucks. It can often leave us feeling helpless. But, if this is an issue you care about, which if you care about this city you really should, there are a couple things you can do to try and offset your ‘renter footprint.’ You can shop locally and support small businesses in the city and their owners. When New Orleanians make money, they make rent. You can also register to vote here and vote in local and state elections, which play heavily in moving toward a solution for the problem. If you come from a state that always votes a certain way, your vote may have more of an impact here where you are actually living.

It is our responsibility to act as residents of this city, and protect it as such. Stripping New Orleans of its people strips it of its vibrancy and life, and that isn’t a city any of us want to live in.