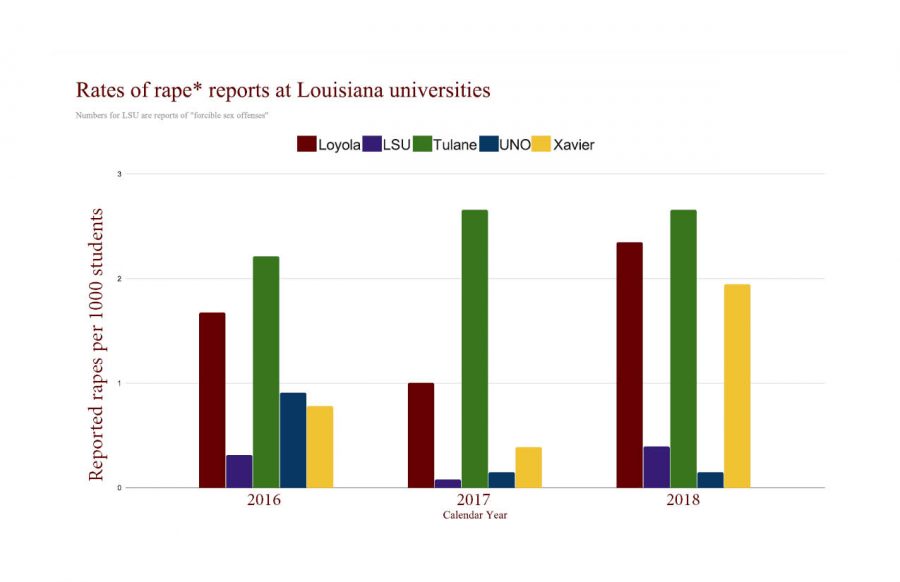 The number of reported rapes at Loyola in 2018, adjusted for the size of the student body, was nearly six times the rate of “forcible sex offenses” at LSU, but Loyola Chief of Police Todd Warren said this could be a good sign.

But Warren said that the reported rapes at Loyola, which jumped from three in 2017 to seven in 2018, could be a sign of cultural and institutional change at the university.

“We put in a sexual assault response team, new counselors, changed our investigation procedures and, then in 2014, our numbers went up to around nine,” Warren said. “What happened was people felt comfortable coming forth. I would like to think that we have an environment at Loyola where people are comfortable enough coming forward with that.”

The categorization of “forcible” and “nonforcible” sex offenses used by LSU was not used in Tulane, Loyola, UNO or Xavier University’s Clery reports, and, according to Warren, is an “outdated” definition that separates incest and statuatory rape definitions as “nonforcible” while “forcible” offenses include, “any sexual act directed against another person, forcibly and/or against that person’s will; or not forcibly or against the person’s will where the victim is incapable of giving consent,” according to the Department of Education.

“It’s just not right anymore because even intimidation is force,” Warren said of LSU’s use of these definitions.

LSU did not provide a line in their report explicitly stating the number of rapes at the university in 2018. For data comparison, The Maroon used LSU’s data on “forcible” sex offenses in reference to the rape data reported by other universities.

Ernie Ballard, director of media relations at LSU, said that the difference in rates of rape and “forcible sex offenses” between Loyola and LSU may not be due to underreporting at LSU, but the fact that Clery includes crimes on and near campus.

“With LSU having more than 30,000 students and 2/3 of those students not living on campus, it’s likely that if something happens off campus and a student may seek resources off campus or if they seek on campus resources, it wouldn’t be included in the Clery report based on the location it occurred. Clery would only capture those incidents that occurred on campus or just off campus,” Ballard said.

Warren also stressed that while the Clery report is a useful tool, students and community members should be wary about using it as an overarching picture of crime on campus.

“I certainly use it in my approach to what issues are we having and what we can do to get these numbers down lower,” Warren said. “Bu,t we have to count the number even if we investigate it and find that we can’t prove that it happened.”

“For instance, if you reported one of these Clery crimes that happened in 2016, I have to show it in my 2018 or 2019 report, whenever you reported it,” Warren said.

Chief Student Conduct Officer and Title IX Coordinator Diana Ward said that while the Clery report is helpful in guiding decision-making, her department focuses on increasing support for Title IX programs no matter what.

“Regardless of what the data is showing, we do about 65 programs, trainings, a year related to sexual misconduct and student conduct and that will never change, although what we focus on will always be informed by data,” Ward said.