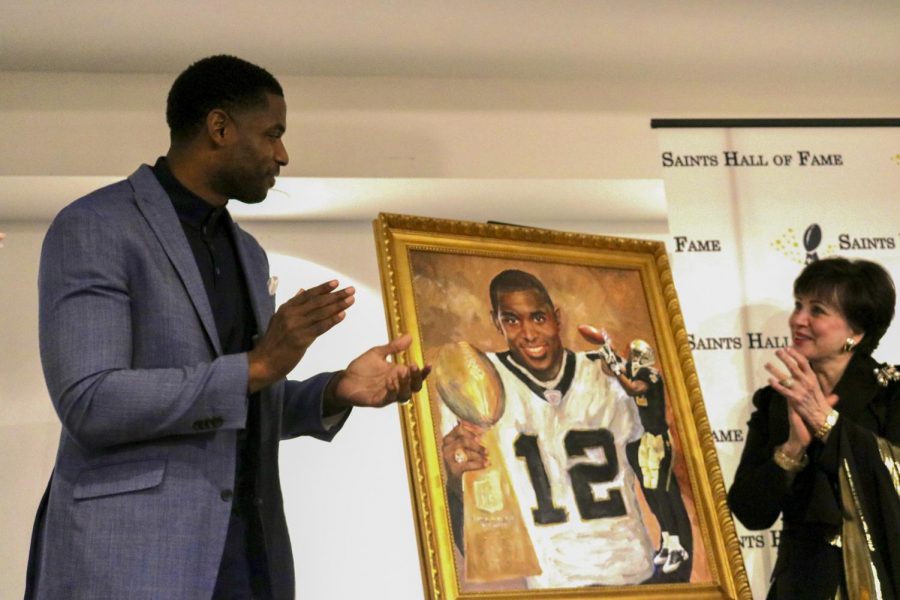 Midway through the NFL regular season, former Saints stars and were immortalized into the team’s Hall of Fame.

Wide receiver Marques Colston and running back Reggie Bush were both awarded the honor. Their names and portraits now hang in the Hall of Fame museum inside the Mercedes-Benz Superdome.

The hall’s general manager and chairman of the board, Ken Trahan, was honored to have both players added to a long list of Saints greats.

“These are all Sean Payton-Super Bowl era guys who are richly deserving, who represent the very best time in New Orleans Saints history,” Trahan said.

In the seasons the duo shared together, Colston and Ingram managed to win Super Bowl XLIV versus the Indianapolis Colts in 2010. But, they also racked up a significant stat sheet during their time with the franchise.

In his decade with the Saints, Colston led the team in receptions five times, earning a total of 711 catches and 9,759 yards ⁠— both franchise records.

Bush was drafted by New Orleans No. 2 overall out of the University of Southern California back in 2006. In his five years with the team, Bush took a total of 524 carries for 2,090 yards and racked up 17 touchdowns.

Colston sees both he and Bush as a part of an inspirational era for the franchise.

“If nothing else, that group was about perseverance and overcoming adversity, and I think that speaks to the city,” he said.

The honor was humbling for both New Orleans icons.

“Just being a fan of football and understanding the names that are in the hall already, it’s a tremendous class to be a part of,” Colston said.

A look at the @Saints Hall of Fame Gala. The team inducted @MarquesColston and @ReggieBush into the hall this year. #BeOn4 @WWLTV pic.twitter.com/JZY5ZCvVUk

Former Louisiana Governor Kathleen Blanco was also honored at the ceremony. She was awarded the Joe Gemelli Fleur-de-Lis award for her efforts to keep the team in New Orleans and to renovate the Superdome after the storm.

Blanco passed away on Aug. 18 but her family was present to receive the award in her honor.

Monique Boulet, Blanco’s daughter, said, “(The New Orleans Saints) are a wonderful part of Louisiana. She loved them. We all loved them. So to be a part of the Saints family officially is pretty neat.”

Boulet said she feels as though the fan base is grateful for her mother’s recovery efforts after the hurricane, especially for the stadium repairs.

“To be able to have (the repairs) happen, meant that people could have that in their lives and put their lives back together. So it was symbolic in so many ways,” she said.

Throughout the night, the fans that packed the reception hall chanted and praised each honoree for their efforts and impact they had on the city.

Lilat Bush, wife of Reggie Bush, spoke on her husband’s behalf at the ceremony. A delay in flights caused the former running back to miss his flight to New Orleans, but the crowd was welcoming nonetheless.

“When we land here, we never pay for a meal. That’s how (the city) accepts us. With open arms, they accept our family the same way. It speaks volumes about what kind of people the city has,” she said.

You can visit the Saints Hall of Fame Museum Monday through Friday by appointment or during a team home game.