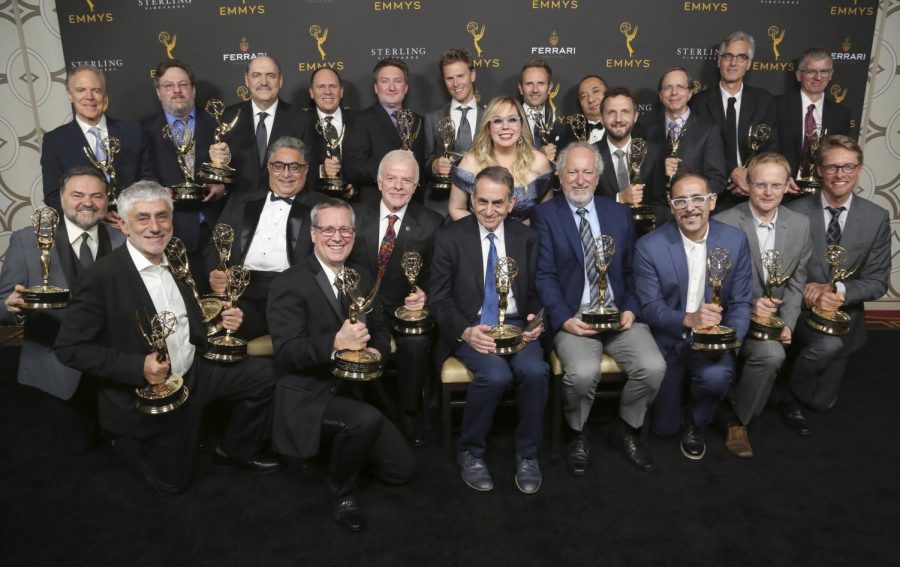 IMAGE DISTRIBUTED FOR THE TELEVISION ACADEMY - Actress Kirsten Vangsness, center, poses with the winners of the Engineering Emmy Awards at the 71st Engineering Emmy Awards, presented by the Television Academy at the JW Marriott Los Angeles L.A. LIVE hotel on Wednesday, Oct. 23, 2019 in Los Angeles. (Photo by Willy Sanjuan/Invision for The Television Academy/AP Images)

It’s that time of year once again in Hollywood: dazzling red carpet events, celebrities dressed to the nines, crowds buzzing with excitement at potential wins. Award show season has been a well-known pop culture phenomenon for as long as I can remember. However, as much as it generates excitement and conversation surrounding potential recipients, there is also much controversy surrounding these events. Whether it’s the trend of the snubbing of actors of color at the Oscars or the music video award sub-categories that separate genres by race, the glamorous tradition seems to have more to it than what meets the eye, especially when it comes to who gets to bring home the prize.

The idea that there is a system of privilege, particularly amongst white individuals, in the entertainment industry is not new. After all, it’s difficult for audiences to overlook the fact that directors like “Get Out” director Jordan Peele is only the fifth black director to receive a nomination in this category, which has been around for decades. It stands as a fact that more often than not, as April Reign, the woman responsible for coining #OscarsSoWhite, puts it in a Vanity Fair piece, “studios still consider it risky business to staff films with members of neglected populations, both in front of and behind the camera.” This is surprising considering how films including diversity such as Ryan Coogler’s “Black Panther” or Barry Jenkins’ “Moonlight” sell and are often very well received by the general public.

The same could be said in the music industry. Whether it’s the Recording Academy’s constant snubbing and undermining of rap/hip-hop and R&B categories by letting albums like Adele’s “25” beat Beyoncé’s critically-acclaimed “Lemonade,” which Adele herself even claimed in her acceptance speech deserved the award. This is, more often than not, a result of the ‘ghettoization,’ as NPR describes it, of genres, like hip-hop, by separating it into its own category, which in turn takes away the legitimacy of the achievements of performers under this genre, not allowing them to compete for the top prizes of the night with their works. As a Hispanic woman myself, I was overjoyed to see the massive commercial success of a Spanish-language song like “Despacito” in the United States, filled with joy at the sight of representation of a genre like reggaeton. Which is why it was so incredibly devastating to see a song that held the record for longest amount of time at #1 on the Billboard Top 100, lose at the Grammys in their biggest category.

Award shows separating certain styles or genres of music comprised mostly of artists of color is not something new. This much became apparent when controversy broke out this year over the VMAs creating their new “K-POP” categories, under which they included groups like BTS, Monsta X, Blackpink, EXO and NCT 127. This spurred many K-pop fans to call the award show ‘xenophobic’ and ‘racist’ and to express their disappointment at the fact that they felt the need to separate music made by Asian artists into its own category. They claimed that artists like BTS, whose most recent record “Map of the Soul: Persona” was responsible for breaking YouTube’s 24 hour music video premiere record with “Boy With Luv,” deserved to be in the running for the show’s main categories, due to the band’s massive international success. One fan pointed out the hypocrisy by saying that if nationality would play a factor, then Australian band 5 Seconds of Summer should be in a separate category as well.

Are things looking up? Possibly. The beginning performance of the 61st Annual Grammy awards, with its explosion of latin flavor and culture was an exciting opportunity for representation. The awarding of films like Alfonso Cuaron’s “Roma” or Peter Farrelly’s “Green Book” brings global audiences closer together and encourages voters in upcoming shows to consider the value of individuality and hopefully make the playing ground for future wins a more even one.