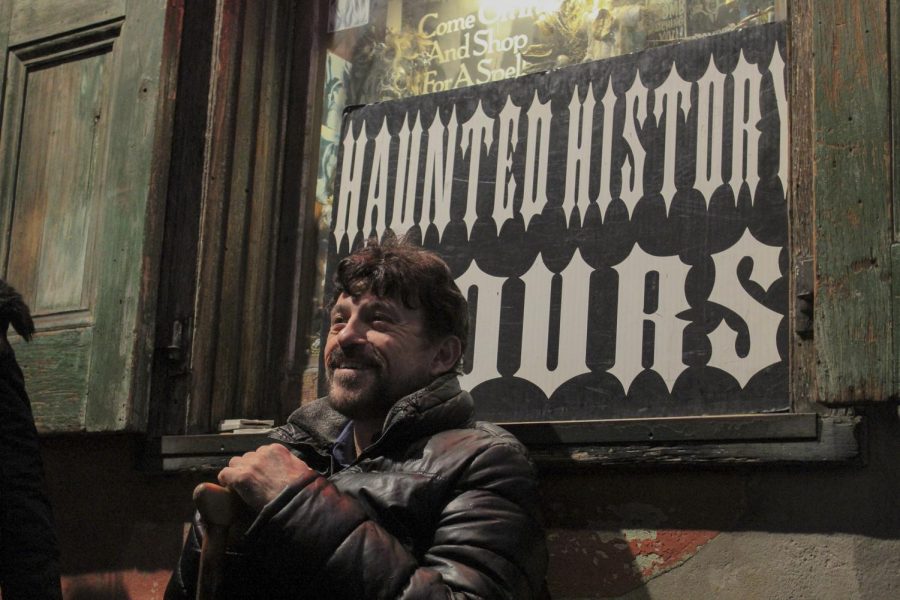 Sidney Smith, owner of Haunted History Tours, waits outside of Rev. Zombie's House of Voodoo shop for the ghost tour to begin. Haunted History Tours has been delivering gruesome tales and showcasing haunted sites throughout the French Quarter since 1995. Photo credit: Andres Fuentes

For 300 years, New Orleans has been the site of Mardi Gras festivities, crawfish boils and the occasional hurricane, but some tour guides wish to tell the tales of pirates, vampires and the ghosts that call the Crescent City their home.

It was the inspiration to showcase the city’s darker side that led Sidney Smith to start the company with the ghost tour, giving the Big Easy its first tour that focused solely on hauntings, such as the courtyard of St. Louis Cathedral, Lafitte’s Blacksmith Bar and the Lalaurie Mansion.

“I had seen tour groups walking around, but nothing like what I had in mind,” Smith said. “I would see a tour on the street and think, ‘Why not start something different?’ I’ve always been an entrepreneur. I’ve always been a fan of the paranormal, ghost stories and New Orleans is a tourist mecca.”

Smith would go on acting as the company’s sole performer, guiding groups along paths of hauntings and horrors. He learned quickly that his strengths lied more in the promotion and marketing of his tours.

He hired other entertainers to lead the tours and deliver the signature “wow experience” that the company is known for. The tours would go on to gain national fame with features on A&E, History Channel, Travel Channel, SyFy, Bravo, MTV and national tourist magazines. Celebrities have also stopped by on tours, with notable names such as Nicolas Cage and Dan Aykroyd strolling down the streets of the French Quarter.

It was the tour guides’ unique style that brought the national attention and, to this day, they still bring in the brave souls eager to learn about the spirits of the city.

“I hired performers or story-tellers that were in theater or wanted to be actors or actresses that would deliver the material,” he said. “The tour guides that I use are very animated characters.”

Tour guides in New Orleans need to pass a series of tests from the city in order to obtain a tour guide permit, but the guides at Haunted History Tours go the extra mile to both educate and entertain.

“We actually do paranormal research behind our stories, so we don’t just make it up,” Christine McArdle said.

McArdle has been a tour guide for Haunted History Tours for nearly 10 years and explains the amount of detail that goes into researching the locations and histories tied to the city’s ghostly side.

“We do a lot of research to make sure not only that these things happened in the past and the event itself occurred, but also that the paranormal continues to occur,” she said.

Despite the ghost tour being the company’s flagship tour, there are around 10 different tours to fit any guest’s needs, such as a cemetery tour, a vampire tour, a voodoo tour, a 5-in-1 tour, which offers multiple topics in one tour, a pub crawl and bus tours across the French Quarter and New Orleans’ Garden District.

A tour group of 25-28 people is led throughout the city to meet face-to-face with buildings and locations that house stories of hauntings and murders but despite the heavy local ties, the business sees more interest form the tourists rather than the average New Orleanian.

“95 percent, maybe 99 percent of people that take our tours are tourists,” Smith said. “Haunted History Tours is one of the most popular things to do in New Orleans. The Travel Channel recommends it as the No. 1 tour to do (in the city) but we hardly ever see locals.”

Despite the foot traffic being from people from out of town, the tours have garnered a widespread reputation for delivering a unique tour with a New Orleans spin. The company is so well-known that even tourists from Adelaide, Australia had to hear about the ghosts for themselves.

“I really appreciated the history,” Jessica MacDonald said after taking the ghost tour.

MacDonald organized a trip with her friends from Adelaide to visit multiple cities across the United States. While in New Orleans, it wasn’t just the Cajun cuisine that they had to check out.

“I think that you can come (on the tour) and really feel the cool vibe. I think I wanted an explanation of the stories and I definitely got that.”

Whether scary stories aren’t your thing, or if you are skeptical about the paranormal, the tours still appeal to anyone’s curiosity and aims to bring everyone a good time.

“We don’t have people jumping out trying to scare you along the way. This is not a Halloween spook house. If that happens, then you’re being mugged and you need to run,” Smith said. “(Guests) can go on the tour and not necessarily believe in ghosts, but they’ll have a good time. By the time we get to the bar break, if they don’t experience spirits of one kind, they can experience spirits of another.”

If a Voodoo Daiquiri or a Hurricane from a haunted pirate tavern does not sway your mind, skeptics often leave the tour with a sense of curiosity despite their disbelief.

“It’s not cheesy or hokey at all,” Smith said. “I can’t tell you how many wives drag their husbands on the tour to only have the husband say to the tour guide, ‘Man, I really thought I was going to hate this but this was a lot of fun.’”

Despite some people find the stories hard to believe, Smith assures that the stories are real and are linked to the dark and dreary past of the city.

“I’m asked frequently, ‘Why is New Orleans considered one of the most haunted cities in the country?'” Smith said. “We had a lot of death in a very small area in a relatively short period of time. Violent death and strong emotion contribute to the paranormal or ghostly activity. We have no shortage of that in New Orleans.”

And if tales from long ago don’t keep you on edge, then the personal stories of the tour guides might creep you out.

McArdle can remember the many shadows and voices she experiences while telling tales of murders and crimes. Smith recounts nearly 1,000 faintings happening outside of the haunted Lalaurie Mansion while a tour was going on and he often tells the story of a mother taking the tour while holding the hand of a children’s spirit.

Being so successful in the industry for so long has brought on a lot of attention from other companies, but Smith feels his tours offer a unique quality to them that other companies can’t replicate.

“We spawned a lot of competitors, but it’s no accident that people come to our tour,” Smith said. “I put a lot of money into marketing and promoting, but it’s our product, our tours, that do the real selling. They make us stand out from the rest. We quite literally wrote the book on this stuff.”