Organizations call for unity against ICE 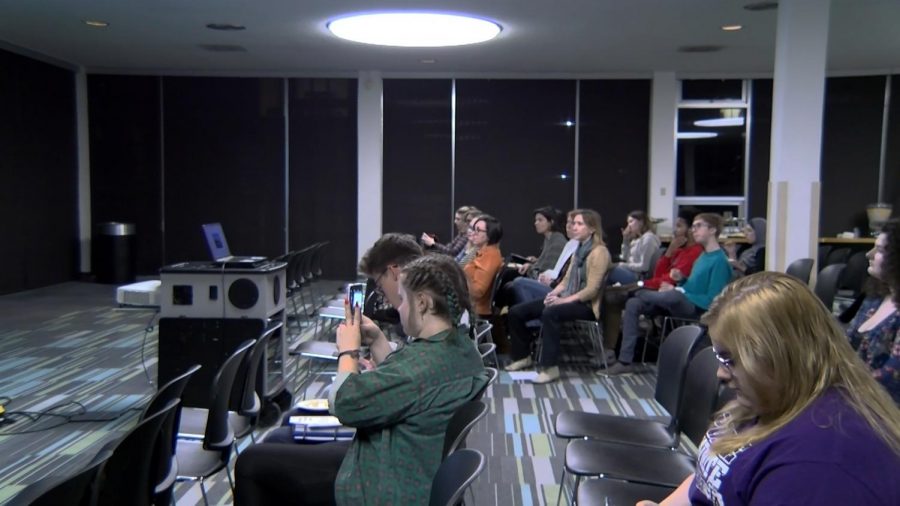 Students listen at the Fight for Immigrants' Rights session hosted by the Loyola College Democrats. The session had both local and national organizations in attendance. Photo credit: Cristian Orellana

Most nuns pray in monasteries. Some get arrested by police at protests. Sister Quincy Howard is the latter.

“If someone had told me that in five years, that i would be a nun lobbyist on Capitol Hill, under the Trump administration, it would have seemed really impossible,” Howard said.

Howard only recently became Catholic, being agnostic most of her life, and she was also arrested for protesting against Immigration and Customs Enforcement.

The event focused on how different organizations on both national and local levels all fight for immigration rights in their own ways and also gave general information on what ICE is currently doing and how New Orleans fits into the broader picture. Howard focused on how her organization works on a national level to lobby against ICE policies.

“The United States government is currently overseeing operations that criminalize, terrorize, and harm good people for no good reason, often times people who are coming to us for help,” Howard said.

On the local level, Martha Alguera, who leads Voces Unidas, also spoke at the meeting, highlighting how New Orleans fits into the broader picture of immigration reform and also what her organization does on a more local level.

Voces Unidas provides immediate post-release help for migrants, providing them some essential items like a cell phone, clothing, shoes and a place to stay for a few days, while also trying to connect them to their families. Since migrants need a name and phone number of someone who will pick them up from the detention center before they are released, the coalition set up a network of people who run from New Orleans to the different detention centers to pick these people up.

“When I try to recruit friends to help me sometimes they say it’s the Underground Railroad,” Alguera said.

Alguera saw that no other local organization was filling this niche by helping out migrants as soon as they are released, giving them supplies and connecting them to their families, even if it is just a phone call.

Alguera is currently trying to recruit a bigger group in northern Louisiana, where most of the sixteen detention centers in Louisiana are. Getting someone to New Orleans can be a multiple person effort. One migrant, who was released two weeks ago, took four people to bring them to New Orleans.

“We’ve had, many times, folks from New Orleans will drive five hours to pick up people. That’s a long trek,”

The organizations of the event, the Loyola College Democrats, led by co-presidents Emma Trunkle and Gabriela Carballo, who is also a member of the Maroon staff, hope that the event will inspire students.

“We have a huge Hispanic population on campus, as well a huge diverse student body,” Trunkle said.

Trunkle hopes that the event will spark more volunteer action and advocacy in the student body on a local level, like volunteering at Lifeline, which is a group that answering calls from migrants and offers translations.

“We really hope that they hear what we said tonight and actually do something,” Trunkle said.