Big Easy Con serves as a playground for cosplayers 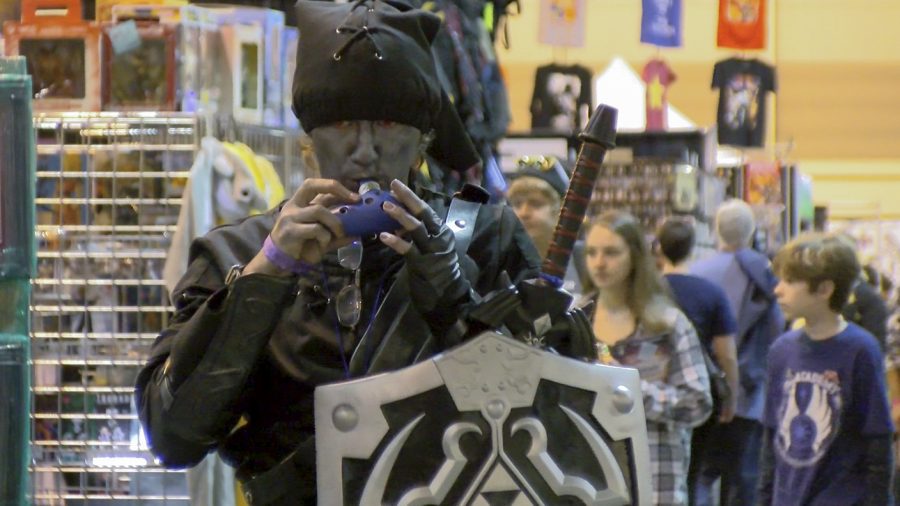 A cosplayer dressed up as Shadow Link from the video game "The Legend of Zelda" plays the ocarina at Big Easy Con on Nov. 2. The ocarina is an important item in the video game series. Photo credit: Cody Downey

While many people at Big Easy Con were there to see the celebrities, comic book artists and collectibles, the thing that they couldn’t help but look at were the people in costumes: cosplayers.

Cosplaying is when fans show their appreciation for their favorite characters by dressing up as them.

Paul M. Patecek, accompanied by a home-made robotic dog, was dressed up as the Fourth Doctor from the popular British sci-fi series “Doctor Who.” Outside of conventions, Patecek is the “Universal Guardian” of Krewe du Who, a “Doctor Who” inspired krewe that has rolled with the Krewe of Chewbacchus, a “Star Wars” themed Mardi Gras parade. He said that he chose to be the character due to his love of the television series.

“Back in the early 80s, PBS started playing this sci-fi series and I started watching it while I was in high school,” Patecek said. “I became addicted.”

Patecek was one of the many in attendance who chose to cosplay. Cosplaying with all of them was professional cosplayer Lua Stardust.

Stardust began her journey into cosplaying after attending a convention in 2012. After noticing others in costume there, she decided she wanted to do the same. Stardust said the appeal of cosplaying comes from a fan’s want to embody their favorite characters.

“It shows their favorite fandoms and they get to experience that with people who understand what they do like and having this space to do so is really awesome,” she said.

Though most of the cosplaying at Big Easy Con was very tame, some fell in to the more risque side.

The Aerial Space Squad is a group that mixes cosplaying, pole-dancing and acrobatics who, like Krewe du Who, has performed with the Krewe of Chewbacchus. Painted in all red as “Star Wars” villain Darth Talon, performer Lex Flex said this combination is what makes their group unique.

“We’re basically aerialist nerds,” she said. “We just dress up as all our favorite characters and be who we imagine we can be and do it upside down.”

Another group that pushes the limits of cosplaying is the “nerdlesque” group known as The Society of Sin, which brings together the worlds of pop culture and burlesque. Performer Diana Dietrich said this combination is what helps keeps their group different.

“Why wouldn’t you want to just take your favorite characters and then see what it would be like if they also just took off their clothes,” she said.