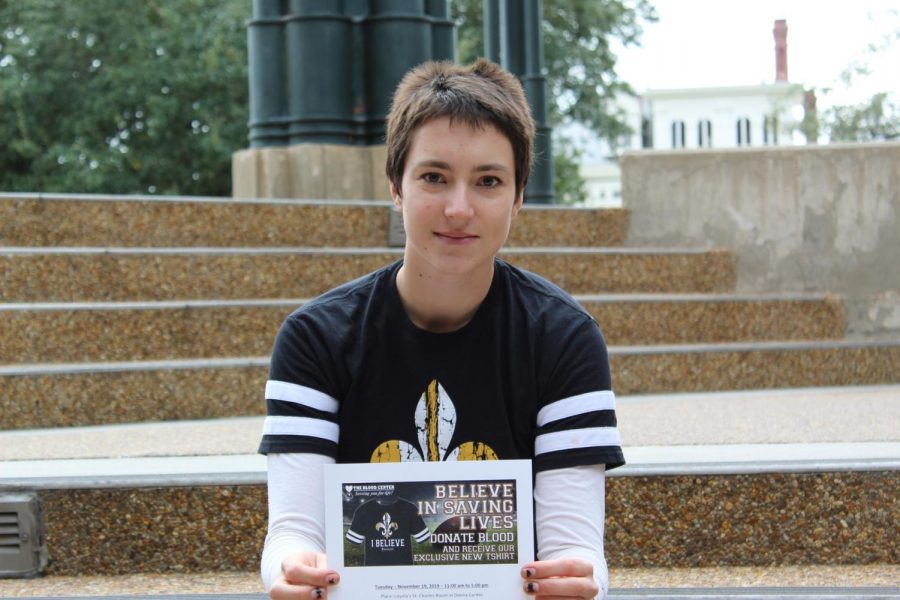 When Alaina Bryan began researching blood drives in Louisiana in 2017, she was shocked to find a lack of opportunities. Her research found that the Red Cross does not count on Louisiana as a donor state, something she immediately believed to be a waste.

“I was walking around campus and in between Loyola and Tulane, and with every healthy young person I saw, I was like, ‘Wow, what a wasted opportunity. So many healthy people walking by me,'” the music industry studies senior said.

Her involvement with The Blood Center kicked off from there.

Bryan organized and conducted her first blood drive at Loyola soon after, on Jan. 17, 2017, during her freshman year. Since that drive, she, in conjunction with a local blood bank in Metairie, has run blood drives that have collected 574 pints of blood, all of which have been donated to Children’s Hospital New Orleans.

Bryan has run three to four blood drives a year in the St. Charles Room since she began.

“There’s a couple other upperclassmen girls that have been working with me, but besides that we don’t have any freshman or sophomores who have reached out to me, so we are definitely trying to get people interested,” Bryan said.

Although Bryan acknowledged that some students can be put off or freaked out by the mention of blood, she feels working with a blood bank and conducting blood drives is among the most rewarding work someone can do.

But, Bryan isn’t the first Loyola representative to get involved with the Blood Center, the blood bank in Metairie. In 2012, an adjunct alumni professor’s three-year-old daughter was diagnosed with leukemia. According to Bryan, The Blood Center played a critical role in helping the young girl.

“The Blood Center helped to organize a blood drive pretty fast in the music building and collected enough to make a difference and save her life,” Bryan said.

In addition to the work she has done to organize drives, a head injury Bryan suffered from over this past summer made the importance of donations hit especially close to home.

It is stories like those are a testament to the importance of the work she does, Bryan said.

She encourages students to donate blood in upcoming campus drives, despite the fears and misconceptions that can surround the process of donating. Squeamishness is a common reason students give for not donating, she said.

“So many people have told me that they’re afraid of needles,” Bryan said. “A lot of people are just nervous because they don’t really understand the process and understand that it’s not as hard as you think.”

Bryan’s next upcoming drive will be in the St Charles room on November 19, 2019. Despite the fact that she will be graduating in May 2020, she said she hopes to continue the tradition of bringing blood drives to Loyola’s campus that students can take advantage of.