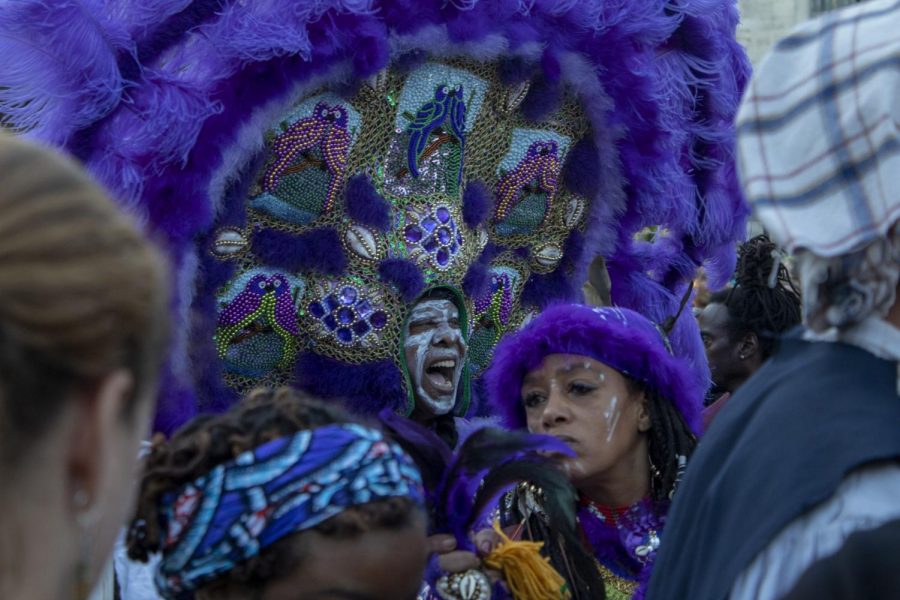 Sadness, pain, weariness and pride were all painted on the faces of marchers in the Slave Revolt Reenactment.

Everyone had a different feeling as they set off for Congo Square on Nov. 8, 2019, but their chants were unified under one word: freedom.

The reenactment was the latest creation from artist Dread Scott. Scott wanted to re-imagine the 1811 revolt that took place in St. John the Baptist Parish and marched down toward New Orleans.

“I make revolutionary art to propel history forward,” Scott said at a meeting held at Loyola talking about his work and the aftermath of the Slave Revolt Reenactment on Nov. 13, 2019.

He wanted to make a movie out of hundreds of actors, in period-accurate clothing, doing the two-day, 26-mile march to the French Quarter — the location the original riot was meant to reach.

While able to take breaks during the walk, eat lunch and wear comfortable shoes, actor Sarah McGriff recognized how that wasn’t a reality for the slaves back in 1811.

“The biggest thing for me was that we actually made it to New Orleans,” McGriff said. “Not all of them did. It made me think that maybe we finished the journey that they started.”

Henry Lotts is a life-long New Orleans native and he didn’t know about the 1811 riot, which some experts call the largest slave revolt in recorded American history. Lotts felt being a part of the re-enactment was a learning experience.

“To know even what they went through in 1811 is unbelievable,” he said. “I didn’t even know this story. So it was definitely an eye opener. Now I really understand what it means to wade in the water.”

The actors did what they could to be as authentic as possible, enduring the changing climates and the harsh terrain. As the group traveled south along the Mississippi River, many participants knew they were headed father than their ancestors had ever gone.

McGriff said, “We actually made it to New Orleans, and (the original rioters) did not. So that really hit home for me. We finished the journey that we started.”

The 1811 rioters were stopped near modern day Kenner, Louisiana. Some were shot and killed by local militia while others were rounded up and hanged. Either way, their march for freedom ended without reaching their initial goal, and actress Jordan Rome understood that.

“The enslaved folks that we are uplifting had the most radical vision of freedom in that time, so (I was) just carrying that with me. I feel very full and proud, inspired, empowered,” Rome said.

Along the march through the French Quarter, Rome was among a handful of participants who led the group with chants of freedom and liberation.

“Something like this hasn’t been done before and to be in communion with black and indigenous people for freedom and emancipation is incredible,” Rome said.

Actor Lawrence Williams felt as though he accomplished something that he could have never done in a different time period.

“It was a powerful message that we brought. Back then, they didn’t have freedom, and now we got it,” Williams said.

When the procession concluded in Congo Square, McGriff reflected on the state of African Americans now in the United States and how better life has become since 1811.

In addition to the older actors that participated, two Loyola students joined the walk.

“It felt like time travel,” Sotero said. “I wasn’t just going to a protest, but I actually dressed up as a slave and did what they did.”

Echoing the same sentiments as McGriff, Sotero understood how different this walk was from back then.

“They told us that we had the VIP version of the revolt,” Sotero said. “I knew they didn’t have bathrooms to go to like we did. We also had a path to walk on, but they didn’t have a path. They had to make one.”

“As we walked and chanted, I imagined the slaves marching through the different parts of New Orleans,” Amankwah said. “It felt like I was walking with them in 1811.”

“For us to march like that, say our chants with confidence, and to see people joining us, that was the highlight of the year for me,” he said.