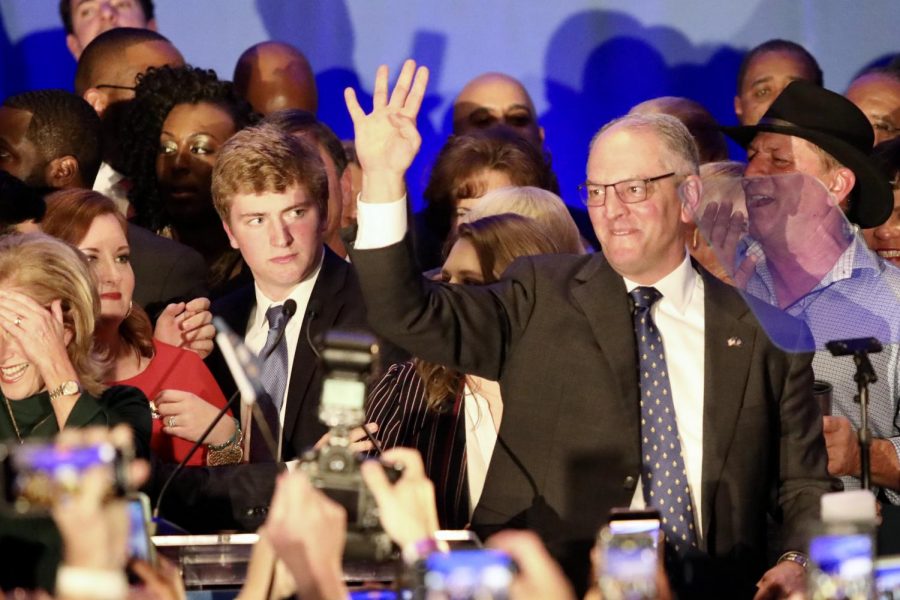 Governor John Bel Edwards holds up four fingers as he is introduced after his re-elction victory. Photo credit: Andres Fuentes

After a campaign season of mud slinging and presidential visits, the dust finally settled and Louisiana decided on another four years of John Bel Edwards.

The democratic incumbent won against his republican competitor, Eddie Rispone, in a down-to-the-wire race. Edwards won 51% of the vote, with 774,469 ballots.

The crowds’ reaction after seeing @LouisianaGov lead over @EddieRispone with 92% of the vote accounted for @WWLTV #BeOn4 pic.twitter.com/HfAnvp66Ll

The win comes despite three visits from President Donald Trump to Louisiana to help rally more support for Baton Rouge businessman Rispone. The wealth contractor never ran for public office beforehand and poured millions of his own money into his campaign, upsetting Congressman Ralph Abraham in the primaries.

Ahead of the polls closing on Nov. 16, Edwards said he extended a warm hand to his competitor despite the animosity throughout the race.

“We both agreed that the time for campaigning is over, and now our shared loved for Louisiana is more important than the partisan differences that sometimes divide us,” Edwards said.

In his first term as the state’s governor, Edwards claimed a projected $500 million budget surplus for Louisiana for fiscal year 2019, he emphasized increasing funding for K-12 school and gave the state’s public teachers a pay raise for the first time in a decade. His administration also takes credit for expanding Medicaid throughout the state.

Councilwoman-at-Large Helena Moreno emphasized how much Edwards has done for New Orleans, such as helping to strike a $67.5 million in a deal with tourism leaders to help address drainage issues.

“John Bel has always been there for the city. He’s a friend of New Orleans,” she said.

Councilman Jason Williams echoed the same sentiment, saying, “Losing (Edwards) would not only set us back, it would set back everything we’ve worked on every single day, every single council meeting. We can’t do it on our own. We need the state to have our backs.”

In the runoffs, Edwards earned a majority of the vote, which Williams believes was due to voters heading to the polls ahead of time.

He said, “Voters weren’t fully awake in the primaries because they assumed that a progressive governor who brought us from a deficit to a surplus would have no trouble during election time. We once they realized that he did, we showed up big.”

That’s the sound of another 4 years of @LouisianaGov #BeOn4 @WWLTV pic.twitter.com/M486uR9rkR

As for Rispone, both council members felt having Edwards’ competitor in the Governor’s mansion would do more damage than good for New Orleans.

Moreno said, “He’s an enemy to our city so (his election) would not be favorable by any means.”