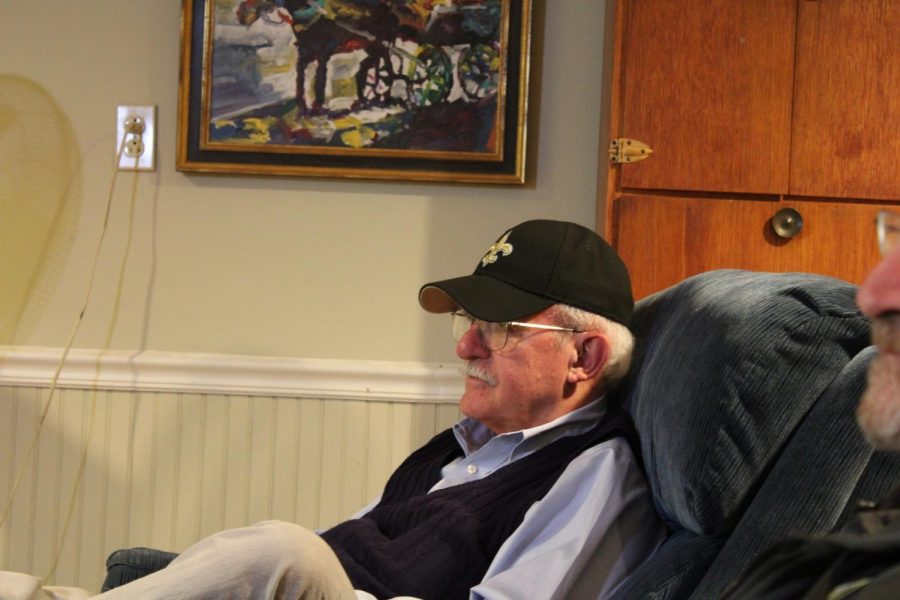 Sodexo cook Ray Davis fills the Jesuits’ house with the smell of omelets and waffles. Most of the 15 head out of their white house just yards away from campus to preach at local parishes.

But for Rev. James Carter, S.J. and Rev. Fred Kammer, S.J., their Sundays involve a quick mass on the top floor of the house, a hearty breakfast on the first floor and the New Orleans Saints game in the basement.

While both sporting Saints gear, the holy duo sit next to each other, feet propped up and eyes glued to the TV.

Carter has always rooted for the home team since he was born in 1927 and Kammer fell in love with the Saints once he moved to New Orleans from Georgia.

But his devotion is not as strong as Carter’s.

“I’m not as faithful as Fr. Carter is because these games interfere with my regular Sunday schedule which is to take a siesta.”

Either way, the pair argue about missed and controversial calls, cheer for touchdowns and have a love for quarterback Drew Brees, just like anyone else.

The team means a lot to Carter, who attended the franchise’s first ever NFL game back in 1967 versus the Los Angeles Rams. The inaugural game had 80,000 fans in Tulane Stadium watching Saints player John Gilliam open the game with a 94-yard opening kickoff return for a touchdown.

“We really thought we were going to win that game,” Carter said. “But that’s all we did that game.”

Carter has seen the Saints through multiple decades, even befriending former owner Tom Benson. Carter got the chance to say mass before the games and even watch the matches with Benson in his suite in the Superdome.

When he compares his former luxury view to his chair at his home, he has a humbling choice.

“I’m seeing more here than I did in the stadium,” he said. “When you’re way up high like that, the players look like little ants on the field. Some people in the box would be watching the TV screen instead of the field.”

Even with so many memories from the team’s history, one moment forever stands out to him – the Saints victory in Super Bowl XLIV.

Carter believes the play was what helped boost the Saints to beat the Indianapolis Colts for the championship. Carter said seeing the Saints win the title in person was something he that would always stick with him.

Carter has many tales as his time as a fan, but also about his time as running guard and a tackle during his high school years.