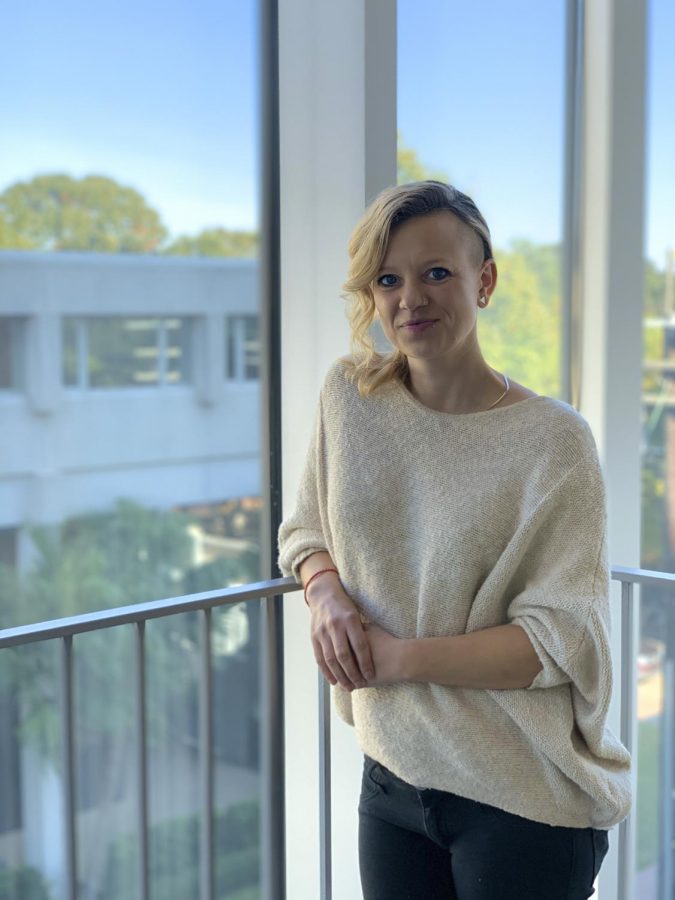 Noël Anderson is a motion graphics professor who grew up in Brooklyn, New York and graduated from SCAD in Savannah, Georgia. Her family is from New Orleans and has family roots that go all the way back to the 1800s. She currently lives with her husband, who is in a similar field, and her puppy.

Who are some of your favorite visual artists?

There’s this painter called Remedios Varo and she was working during the 50s, she was a surrealist, and she does these really psychological and interesting paintings and since she was working around the same time as Dali she gets very little recognition. I’m a big Duchampt fan because he was a painter who was creating motion studies in single frame paintings. There’s a lot of design studios who have amazing work so there’s Pentagram, Buck, Left Channel, Hornet in New York is really dope too.

Why did you want to teach? Why not just stay in New York and be a graphics designer?

After being in Savannah, we went to New York, and we spent 2 years in New York working to just save up to buy our house here. It’s a very stressful field there, and it feels like all you do is sleep, then work, then sleep, then work. But there’s a lot of opportunities there which is great. As much as I love doing animation and motion graphics, the agency world isn’t very fun. Teaching allows you to enjoy the medium that you work in and show it to other people.

What are some of your favorite things to do when you’re not teaching?

I love to go dancing! I grew up going to The Joffrey Ballet School. I don’t get on stage anymore but I still love to go dancing. I play with my puppy a lot! I have an amazing puppy that we love to pieces. I go to a lot of marches and rallies in town, just a lot of cultural things in town. Do you know about the Plessy Ferguson Foundation? So my mom is a descendant of the judge and the descendant of the defendant, they have a civil rights foundation together here. So I do a lot of work with them. I like to hang out with my friends and I love movies. I love animated films and I also love sci-fi. I’ve been learning to garden ‘cause we have a huge backyard at our house.

What made you want to teach at a college level?

When I was younger I didn’t want to teach anything at all but I ended up teaching a lot of K-12. But I don’t like teaching K-12 kids. I don’t like being responsible for children, I love being able to focus on the education and not have to worry about whether a student has walked away. Also the software that we use is pretty advanced and is pretty hard to teach anyone younger or older, the college age is kind of the sweet spot.

When and why did you start teaching at Loyola?

I lived in New Orleans on and off for 10 years and we knew we loved it here and my family is here. Loyola is the only school that I really wanted to work at. The design department at neighboring schools isn’t nearly as good and the students here are so kind. So I really really wanted to work here and they were not hiring and I ended up getting really lucky. After I graduated from college in 2006, I came down here with my degree but there weren’t a lot of jobs here so it was hard to get work. So I walked over to Tulane to see if I could take a graphic design class, and I had been a media studies video major in undergrad so I hadn’t started graphic design yet. They told me all of the program and all of the computer labs were in Elmwood, so it felt like the program hadn’t been well developed yet and I took it as a bad sign. So I walked over to Loyola and I ended up talking to a chair of a department and we had a really great conversation and I asked if I could audit his class and he said “yeah sure!” So I was sort of a TA for him and he let me take the class for free to help the other students. And what that told me was how nice of an environment this is and how sweet and practical people are. So 10 years later when I was qualified to come back and work I said yes to anything they offered me. They asked me to teach a two week high school summer camp and I quit my agency job in New York for those two weeks hoping to turn it into a faculty position. And they asked if I wanted to wanted to adjunct, which I did not, but I took it and shortly after a position opened up and they asked if I wanted it. So within 2 months it turned into exactly what I wanted. I was determined and it happened!

In another life if you weren’t a professor what would you want to do as a career and why?

I had an original plan and spent 20 years training to be a ballet dancer but didn’t do that. I would really kill to retire and work on my garden now that I understand it! I would foster puppies that need it. Or I would be a world traveler if someone paid me to do that.

What are some of your favorite artists/genres to listen to?

I’m a big ol’ nerd in a lot of ways and I don’t listen to any new music, as you heard I was listening to the news when you came in. But because my dad is a recording engineer I’m weird about new music but I also listen to some really old stuff. I love old standards, so Nat King Cole and Fred Astaire. But then also late 80s hip hop, De La Sol, The Roots, stuff that’s kind of a little too old for my age. I feel like it makes sense to love the music that is best from that era so standards from the 50s, rock from the 60s and 70s, and hip hop from the 80s. Those are the best of the best to me. I think Kendrick Lamar is really interesting, Lizzo is killing it right now!

I’m a virgo. I don’t technically believe in those things but at the same time I am very much a virgo.