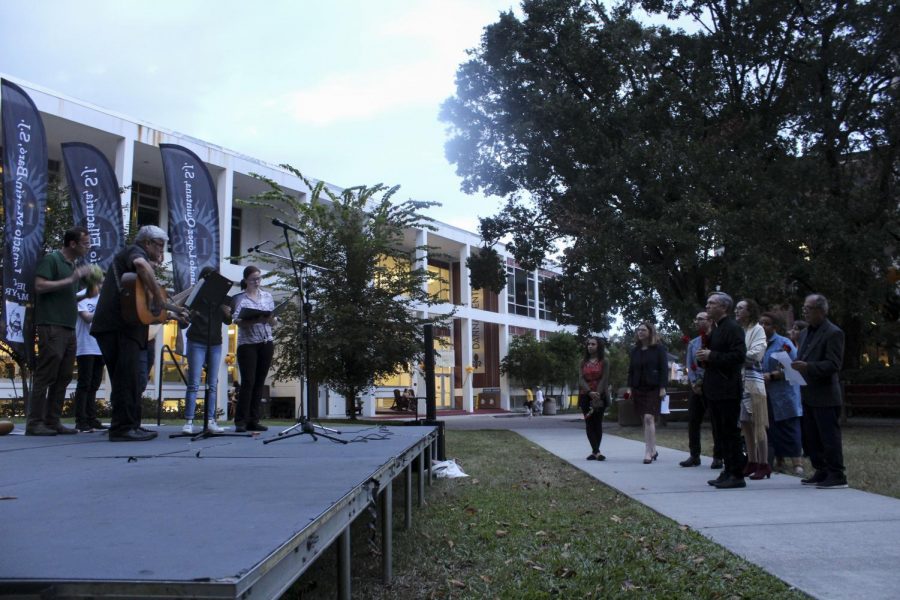 Loyola students and faculty perform music on Nov. 11 in memory of the victims of the 1989 massacre of Jesuits in El Salvador. Six Jesuit priests and two companions were killed in the incident during the civil war that lasted more than a decade in El Salvador. Photo credit: Ver Lumod

The Salvadoran government initially blamed the assassinations on the rebel organization Farabundo Martí National Liberation Front. The murders eventually caused international calls for a ceasefire to the civil war between the two sides in El Salvador, which later occurred in 1992.

Aside from actively advocating for the ceasefire, the Jesuit victims had also raised awareness on human rights abuses inflicted by the Salvadoran government on their poor constituents, which mainly caused the Salvadoran Army to consider them as subversives working for the Farabundo Martí National Liberation Front.

“They refused to be silent, and they also wanted to uphold social justice,” said Latin American studies professor Alvaro Alcazar.

Sponsored by the Loyola University Community Action Program (LUCAP), the week-long series of events honoring the martyrs kicked off with an interfaith service held by Student Life and Ministry as well as the Latin American Studies department on Nov. 11 in the Peace Quad, originally renamed in honor of the Jesuit priests months after the massacre.

The service featured scripture readings and hymns, as well as a reading of Father Ellacuría’s 1982 commencement speech at Santa Clara University in California, where he called for universities to enact transformative change in the real world.

“The Jesuit martyrs were killed because they talked about social justice and the dignity of all people, as well as related issues in their conversations with people and in their classes,” Alcazar said in a speech delivered on the service.

The second event, which occurred on Nov. 15, was a round table discussion of Father Ellacuría’s Santa Clara University address as well as Pope Francis’s 2017 speech to the International Federation of Catholic Universities.

The commemoration events ended with a Martyr’s Mass held in the Peace Quad on Nov. 17.

Alcazar talked about the importance of the commemoration events at Loyola.

“It is a way of honoring the characteristics of Jesuit education and living them,” he said.

Moreover, he indicated that the events are about more than appreciating what the Jesuit martyrs had died for.

“As a social justice university, it is our responsibility as citizens to seek out injustices in our community,” he continued.

Regarding the ongoing issue of religious persecution due to commitment to social justice, Alcazar said that only compassion can change things.

“In the face of injustice and persecution, our solutions must come out of love. As Dr. King said, darkness cannot take away darkness, only light can do that,” he said.

International business senior Amie Jigba, who works with LUCAP, said she wanted to raise awareness about the Jesuit killings and their importance in today’s world.

“The commemoration was important because the reason for the martyrs dying is still very prominent in today’s world,” she said. “It allows people to realize that even though it happened 30 years ago, there’s still justice to fight for.”