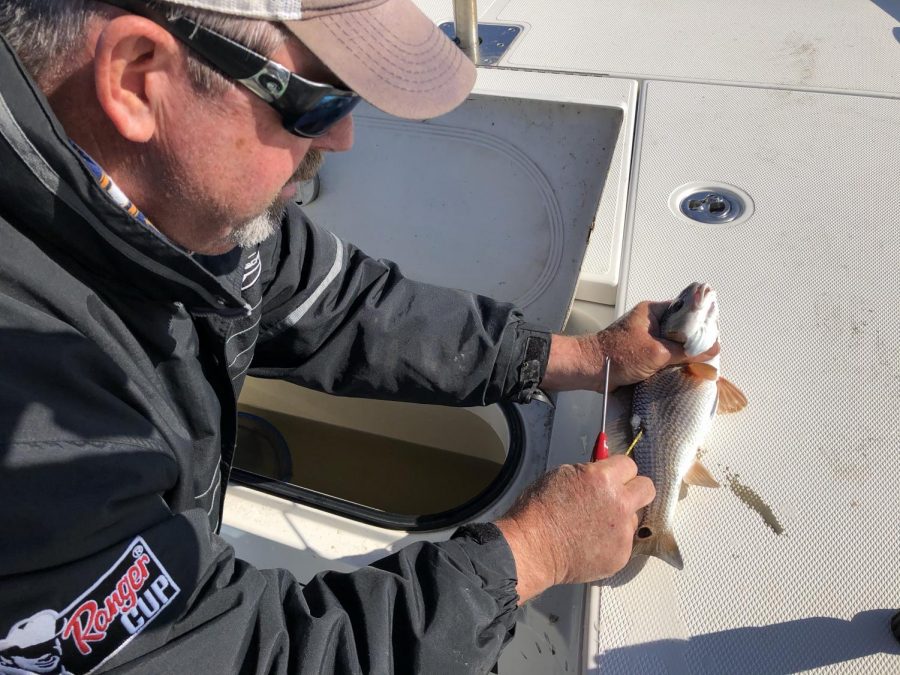 Captain Maurice D'Aquin tags a small redfish on Nov. 2. D’Aquin spends most of his days on the water, fishing off of the artificial reefs. Photo credit: Madison Mcloughlin

After waking up before the sun, Captain Maurice D’Aquin throws on his fishing gear and heads to Nick’s Marina where his boat is still sleeping. He loads up the dry storage with extra gear, fills the fish-hold with ice and shrimp bait and secures his fishing rods in their place. With everything secured and ready, D’Aquin revs up his motor and bounces on top of the water out to the Gulf of Mexico.

D’Aquin spends his days taking customers out on his boat to fish, “showing people that don’t get to see this beautiful fishery we got in Louisiana, and it’s an easy job because Louisiana is such a great fishery.”

Louisiana, however, is not a great fishery naturally. Because of the Gulf of Mexico’s featureless, mostly eroding mud bottoms, almost all of the locations where D’Aquin fishes are artificial reefs, or retired oil rigs that had been left behind or moved to a new location to provide an ecosystem for sea life.

“With these man-made structures, it gives you an opportunity to fish from [natural] structures that have gone away. To be honest with you, just eroded away,” said D’Aquin.

The Artificial Reef Program is designed to convert old oil rigs into reefs to increase habitats for sea creatures. The Louisiana Department of Wildlife and Fisheries recently finalized a plan to convert favorite fishing rigs into reefs in an area where less progress has been made — from the coastline to 100 feet of water depth.

Oil companies can choose to file for a permit to leave the base and rock pile on a decommissioned rig or work with the department and a contractor to put in a new platform in place of a previously removed rig. The Department of Wildlife and Fisheries is then in charge of maintaining the reef.

Mike McDonough, the Louisiana artificial reef coordinator at the Louisiana Department of Wildlife and Fisheries, explained the thought process behind the plan. The list of favorite fishing rig platforms closest to the coastline became the basis of the next phase.

“They’re the easiest to get to, so they’ve kind of created this spot where we’re losing a lot of habitat, a lot of fishing opportunities,” said McDonough. “It hasn’t been as easy for us to replace them.”

The new plan had been in the works for years, according to McDonough.

“It’s been kind of exciting that we were a little constricted previously, and now we’ve really expanded the ability to help the fish and serve our fishermen,” he said.

Along with the fishermen, the program also benefits the oil companies that own the rigs. Josh Etkind, the head of decommissioning in the Gulf of Mexico for Shell Oil Company, said the program is a great, eco-friendly idea.

“Especially for the Gulf of Mexico, it makes a lot of sense,” he said. “We think it’s the best option for these platforms, and it ends up benefitting everybody. It’s a win-win-win.”

When Shell decommissions its rigs, the company saves the money it would normally spend on bringing the entire structure to shore to salvage. The option to decommission is also safer and produces less emissions.

The artificial reefs are also the best option for fishermen like D’Aquin, who fishes at the artificial reefs at least once every other trip out into the Gulf. The abundance in bait fish, crustaceans and the fish that feed off of them has become a reliable source for his fishing business.

“It’s definitely helped our business because these spots are fish producers, day in, day out, you can go there to fish,” D’Aquin said.