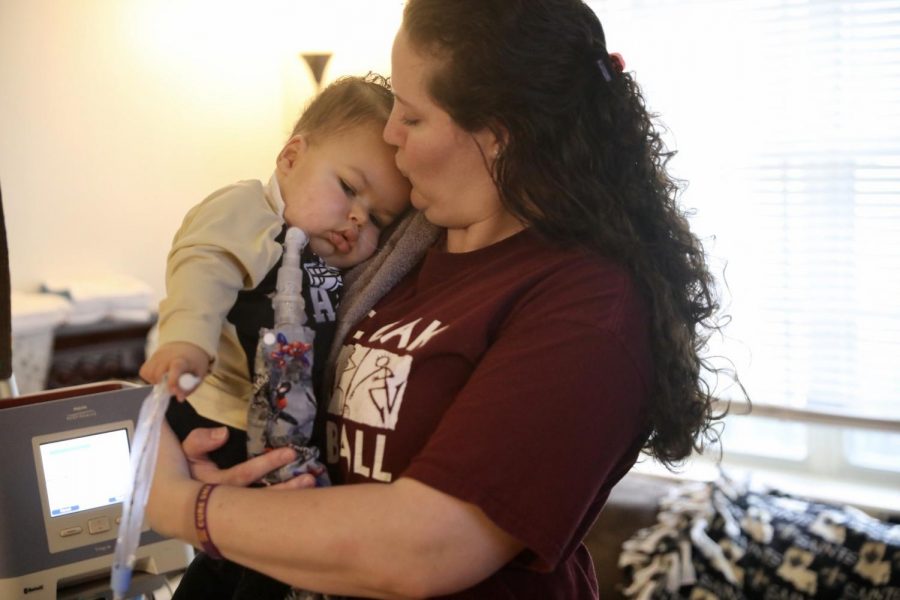 Andrea James and her son, Axel Dennis, embrace in their living room. Axel suffers from SMA and has twice been denied a life-saving drug from the Louisiana Department of Health. Photo credit: Andres Fuentes

A “miracle drug,” has the potential to create a better life for Andrea James’ 17-month old son. However, the Louisiana Department of Health refuses to pay for it.

Axel Dennis was born a normal, healthy baby until a few weeks after the fact. Dennis’ doctors diagnosed him with Spinal Muscular Atrophy Type 1, or SMA. The genetic disease that creates a loss of nerve cells in the spinal cord.

Eventually, Dennis had to have a trach tube. He then lost the ability to swallow and to smile.

“From diagnosis, it’s atrophying. Everything is going downhill,” his mother, James said.

However, a miracle drug, Zolgensma offers some hope for those that suffer from SMA. The drug stops the disease from progressing but it’s also the most expensive medication in the world at more than $2.1 million, according to the Associated Press.

However, Dennis’ Medicaid has twice denied him from getting the life-saving drug. A GoFundMe page is in place to pay for Zolgensma in case he is denied the drug a third time. It’s a race against time as the FDA has only approved the medicine for children under two years old.

“I’ve spent 36 years wanting to have a baby,” James said. “Once I did, you think you have the rest of your life and your kids will out live you. You don’t really hope for the worst. You imagine your life one way and at diagnosis you realize it will be completely different,” she said.

The reason for the denial is the fact that Dennis uses a trach tube and shows signs of progress while on Spinraza. Every four months, Dennis has to go under anesthesia to receive the Spinraza spinal injections, which is often traumatizing.

James said, “Because he’s doing good on this drug, that he doesn’t deserve this better drug for him, that’s better for his life, does not make sense to me. For that to be an added criteria makes zero sense to me.”

As James waits for the trail, she turns to advocacy, raising awareness for the issues that her son and other SMA patients face. She runs the Facebook page, Axel Brings Joy to Life! – Fighting SMA, giving hope to other families that are in similar situations.

“You learn to be his full-time caregiver and find a way to make him happy and comfortable every moment. That is my new job,” she said.

James has been out of the workforce, devoting herself solely to taking care of her son. Seeing her child progress through various medical hurdles makes her emotional.

However, as Dennis’ condition seems to improve over time, she realizes she needs her son just as much as he needs her.

“I found full purpose, and happiness and satisfaction in being his mom,” James said. “He changed my world. There is no depression. There is no sadness. He stripped in all away.”