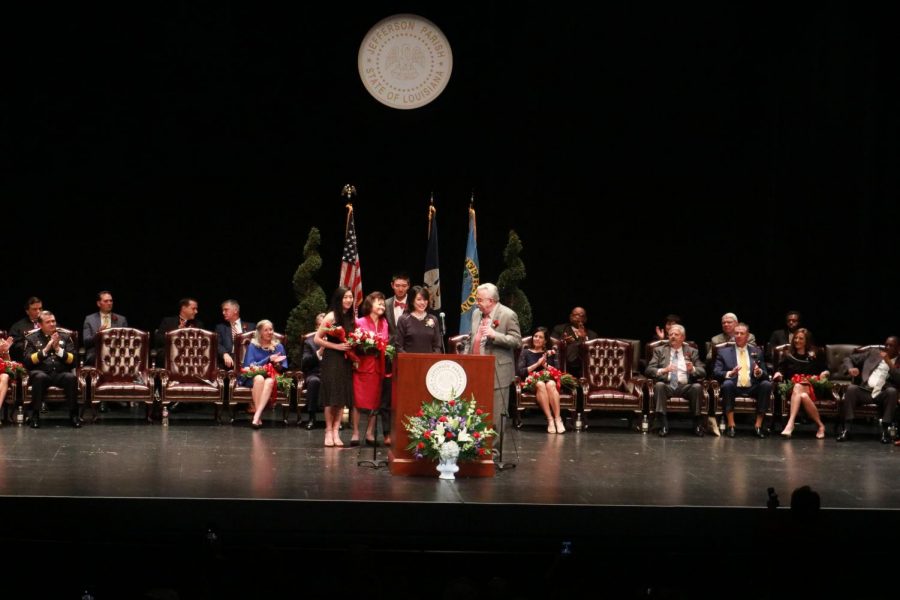 Andres Fuentes, Reporter
Councilman Marion Edwards seemed to take his time as he made his way to the podium for a second time. The special day was supposed to mark a new four years in office for Jefferson Parish politicians, himself included.

However, before anyone swore on the Bible, the former judge went to the mic and with a smile said, “this is the only time I’ve done this without a robe on since I swore your dad in.”

Edwards was chosen by Cynthia Lee Sheng to swear her in as Jefferson Parish’s first female president. The former councilwoman is the daughter of six-term sheriff Harry Lee and said she felt his presence as she lead a successful campaign in the 2019 primaries.

“It’s incredible to me that I just took this oath of office and this day means so much to me,” Lee Sheng said.

Lee Sheng beat out former parish president John Young with 57% of the vote. She said she understands the significance of being the first woman to hold the office.

“Making history in this way only strengthens my resolve to really make a difference,” she said.

Her supporters also feel Lee Sheng is paving the way for minorities in the public sphere.

“More women in politics, more women in the forefront is the future of this nation. Women have a voice and women will be the voice,” said Nellie Yip Underwood.

Sandy Wong has been a long-time family friend of Lee Sheng’s and is excited to see her take her oath.

Wong said, “She’s a role model and she’s a female. So it makes it especially special.”

Councilman At-Large Scott Walker said, “Things are good in Jefferson Parish but how great can we be? It starts with all the people on this stage and I have an abundant amount of confidence that’s sitting up here right now.”

Lee Sheng echoed a similar message of unity but among parish residents.

She said, “A new decade brings a new opportunity of growth as a parish and a region, where we work together as an eastbank and a westbank. Not divided by a river, but united by a spirit to achieve.”