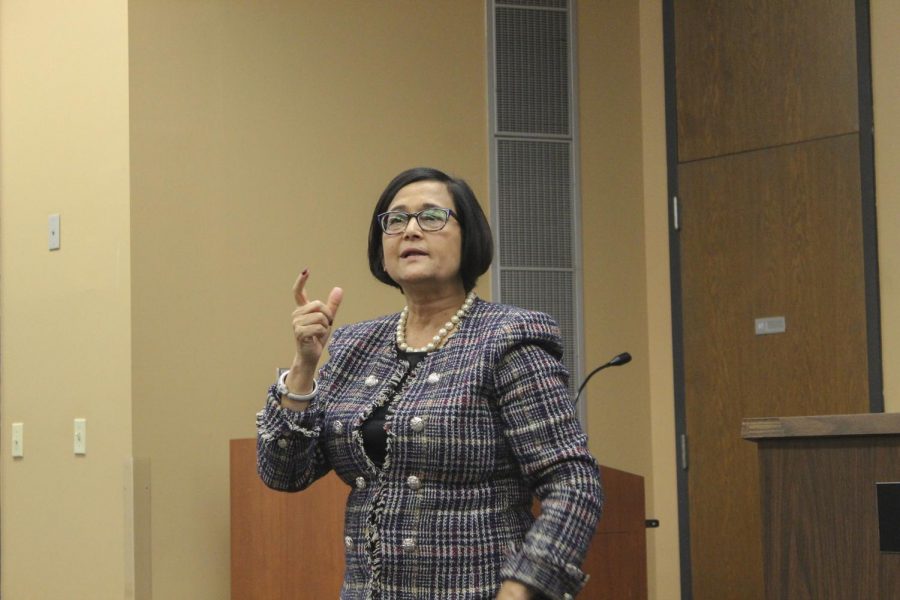 Tanuja Singh, Loyola's next provost, speaks to Loyola faculty about her vision for the university on Nov. 19. Photo credit: Cristian Orellana

After three years of temporary administrators serving in the position, Tetlow said she is excited for Singh to come to Loyola starting in July 2020.

“We are thrilled to welcome Dr. Tanuja Singh as our new provost at an exciting time for Loyola,” President Tetlow said. “As we face the future, Dr. Singh brings to our campus a creative ability to see where universities are headed and the knowledge and skills to get there, as well as a global outlook, innovative spirit, and incredible warmth. Together, these characteristics make her a perfect fit for our community.”

“I am impressed with the quality of Loyola’s programs and the genuine passion and commitment faculty, staff and administrators have for students’ personal and professional growth and success. I am equally inspired by the vision President Tetlow has set for Loyola. Her enthusiasm for building a Loyola that is securely rooted in its Jesuit identity and well adapted for the future is contagious. I look forward to working with the community to help build an even stronger future for Loyola,” Singh said.

Decades ago, she never saw herself becoming a university administrator; in fact, she was a physicist. Originally from India, Singh received a master of science from Allahabad University before changing her route and going to Millsaps College in Mississippi for her MBA and Southern Illinois University for a doctorate in marketing.

“I decided that I liked people better than particles,” Singh said simply.

Singh said her own change of career path serves as an example of the labor market’s demand for “discipline agnostic skill sets,” translatable skills that humanities universities like Loyola give to students regardless of major or college. She said Loyola needs to emphasize the versatility of a humanities education while also creating market-responsive online and certificate programs to grow the university’s income.

“One of my goals is to bring in new revenues and new programming, then you have the ability to hire new faculty,” Singh said. “I truly believe cost-cutting is not the way forward. Once you have cut cost, the next step has to be revenue growth.”

Singh also said she wants to prioritize diversity, specifically among faculty, something that she realized was lacking in higher education when she entered her deanship at St. Mary’s.

“San Antonio is a majority Hispanic city, and we did not have a single faculty who was Hispanic. Not one,” said Singh.

So she recruited the first female Hispanic faculty member to teach finance, a hire that Singh said doubled the number of female students taking the class. This year, Singh said the business school hired its first African American faculty member after learning to intentionally recruit diverse candidates, a concept she wants to bring to Loyola.

“My board was similar in background and similar experiences. How do you change that? It doesn’t happen organically. It has to be part of a strategy,” Singh said. “A diverse organization has better outcomes.”

When Singh got to St. Mary’s, she started a series of town halls and created two student advisory panels to create a tradition she said she wants to continue at Loyola, one of student involvement in administrative decisions.

“You have to be visible and you have to hear people,” Singh said.