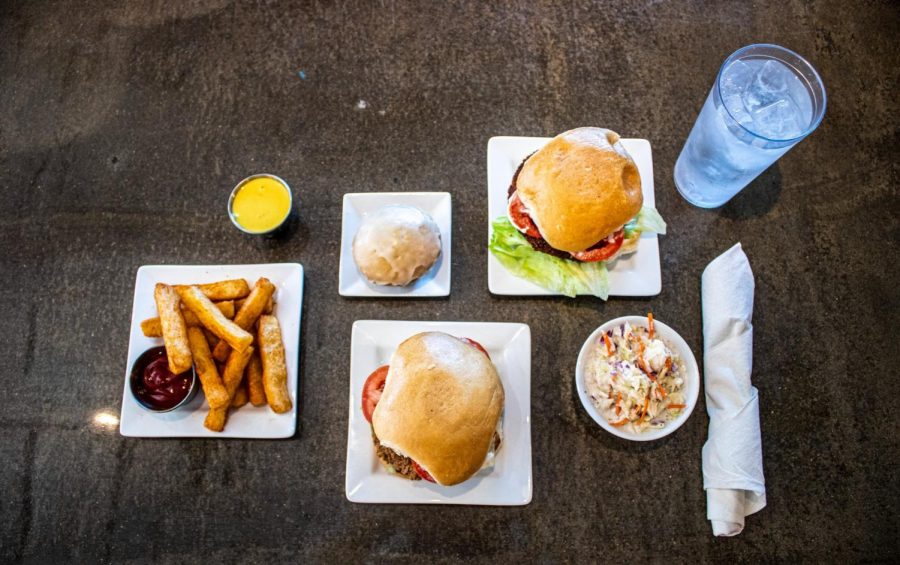 Plates of food from Kindred sit on a table. Currently, they are trying to develop a vegan po'boy. Photo credit: Caitlyn Reisgen

The intersection of Maple and Hillary Streets is known for cheap drinks, cheese fries and crowds of college students partying late into the night, even on Wednesdays. But a new business has moved in across from to Bruno’s Tavern, TJ Quills and Redd’s Uptilly Tavern, one that hopes to bring vegan eats to the local bar scene.

Kindred has only been open a couple of weeks, but owner and vegan of 22 years Caroline Nassrah, A ’06, has high hopes for her restaurant and bar.

“The vegan fried chicken and daiquiri spot, that’s what I want it to be,” Nassrah said.

From fried chicken made out of seitan, a wheat flour byproduct, to dairy-free White Russians and a vegan po’boy in the works, Nassrah said she focused on tailoring her menu to fit New Orleans culture and the vegan diet in what she calls “vegan comfort junk food.”

Nassrah turned down requests to add grain bowls and quinoa to her menu because that was not the purpose of opening Kindred.

“When I was making the menu, I really wanted to make it so if you are coming from Loyola with your three non-vegan friends, everybody can enjoy the food and drink,” Nassrah said.

Nassrah’s focus on accessibility also extended to the menu, where the average pricepoint of a main is $10. Kindred is focusing on rolling out a full menu soon and hopes to eventually add a brunch menu as well.