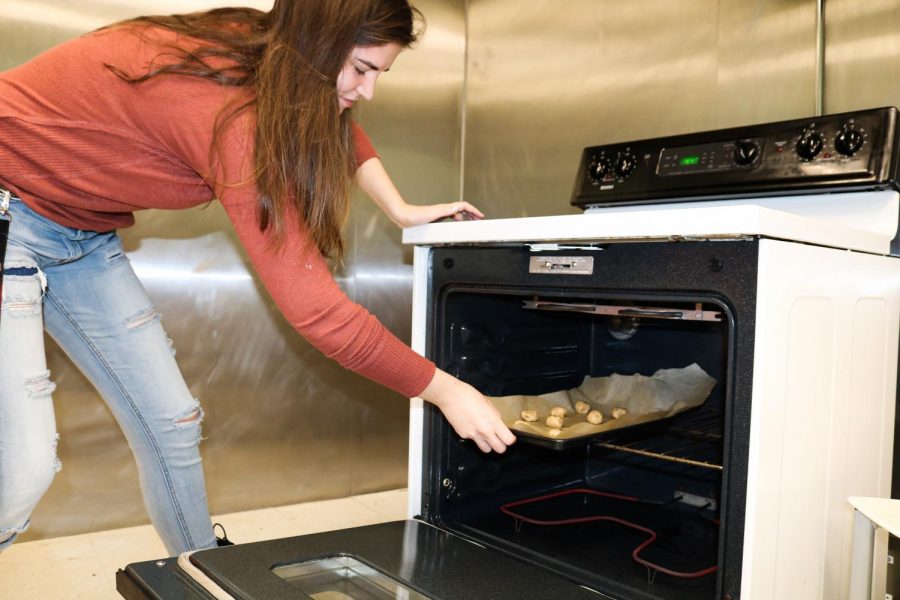 Psychology sophomore Kylie Evans puts food in the oven in the Carrollton Lounge & Kitchen. The newly reopened space was converted from Deaux into a space for use by students. Photo credit: Zia Sampson

After months of simply taking up space next to the turnaround, residential life has finally made the decision to turn the area formerly known as “Deaux” into *cue drumroll*— an on-campus kitchen.

Now known as the Carrollton kitchen and lounge, and awaiting an official name, the space will serve as a place for students to study, cook and socialize. The lounge is awaiting cable TV, and it comes fully equipped with a stove, oven, sink and a whopping four pots and/or pans.

And we are disappointed to say the least.

Deaux stopped existing as a late-night pizza place over the summer last year, and students were polled multiple times after the fact about what they would want out of a new dining area. Responses varied among different food option selections— pizza, Mexican and late-night food options were floated, but none were chosen. Instead, we have an on-campus kitchen when every residence hall on campus already has one.

So the question is: Why would Loyola poll students multiple times if it was just going to end up turning Deaux into an empty kitchen?

Our issue is with the accessibility, or lack thereof, when it comes to turning one of Loyola’s already slim food options into an empty space.

Loyola has 2,615 undergraduate students, 54% of whom live on campus and 100% of whom need to eat. Commuters will either have to bring their own cooking rations to and from school or be left at the mercy of asking for groceries from their on-campus friends. The reality is, they will likely buy C-store granola bars and a milkshake instead as some semblance of a meal.

And even for students that live on campus, City Diner and Deaux are gone. Subway and The Original Burger Company (depending on the day) are the only on-campus food options for students past 12 a.m., and Subway does not get better the more nights in a row you eat it.

Not only are students mourning the loss of late night wings, cheesy bread and personal pizzas, but it is not realistic to think that on-campus students will make the trek out of their dorms to an external kitchen instead using the appliances located in their buildings. Few college students would voluntarily gather all their cooking supplies (hoping they don’t forget any) and make their way down multiple flights of stairs (we know you take the elevator even if you live on the second floor of Carrollton), only to cook themselves a meal in a glass room visible to all passersby.

Director of Residential Life Amy Boyle said that the past three restaurants failed to be profitable in the space Deaux once filled. But even if we couldn’t secure an additional food option for campus, there are endless opportunities for a commercial space the size of Deaux in Uptown. And Loyola, as a university determined to get creative in generating revenue, should have brought some more thunder to the Deaux rebranding brainstorm.

Imagine the other possibilities! It could have been a rentable concert and practice room space for non-music majors, or a Satchmo’s-esque Lounge for commuters and non-commuters alike. Or why not create a state-of-the-art rentable study room with whiteboards, computer software, and comfortable seating for student organizations or stressed seniors during finals to collaborate in? Or what if we let local businesses use it as a pop-up-shop space, rotating the vendor every week or so?

The new Carrollton kitchen is a missed opportunity. And we’ll never stop mourning the tragic loss of Deaux.