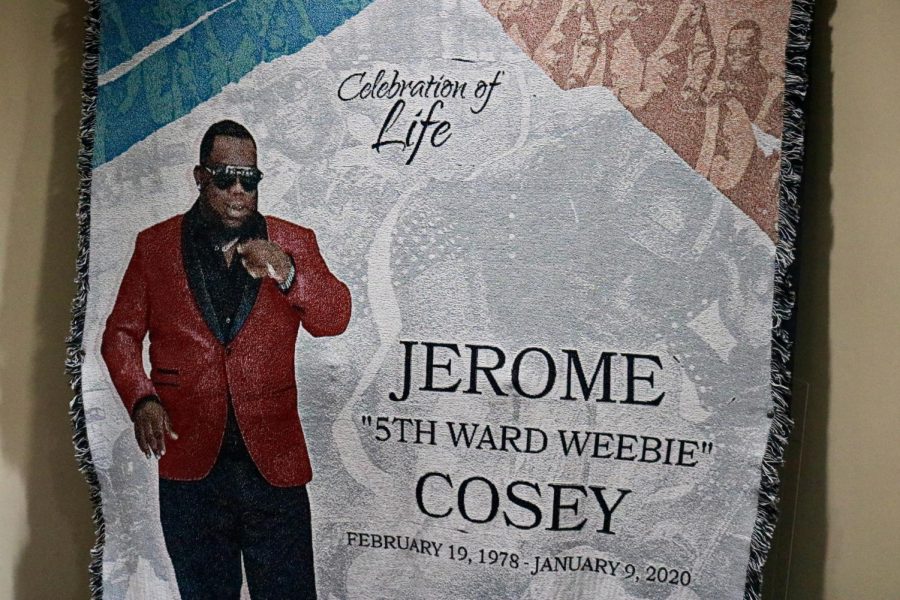 A quilt commemorating 5th Ward Weebie hangs near the entrance to the Mahalia Jackson Theater at his visitation on Jan. 19, 2020. The rapper died on Jan. 9 at the age of 41 after suffering a heart attack.

The auditorium featured local leaders, fellow artists and colleagues, and a community that the bounce pioneer impacted.

Mayor LaToya Cantrell said, “In full Weebie fashion, he would bring us together for no other reason but that of love.”

The rapper died on Jan. 9 at the age of 41 after suffering a heart attack. In his lifetime, he was known for hits such as, “Show the World,” “Lovin You,” and “Let Me Find Out,” which made it to the top of the Billboard chart.

“It didn’t matter where we were, people that never met him before automatically felt his energy,” Wayne “Wild Wayne” Benjamin said, “There were people around the country that I introduced him to, and they already knew who he was. I thought I was doing him a favor.”

Mourners joined together, sharing comical stories about the musician and sending their support for his five-year-old son, Ja’Ron Cosey.

“I want you to know, as your auntie mayor, I’m not going anywhere. I am for you and know that the city of New Orleans loves Weebie as well,” Cantrell said to Ja’Ron.

Following the service, loved ones packed the streets outside the theater for a traditional New Orleans funeral. 5th Ward Weebie’s casket was carried out on a horse drawn carriage followed by a brass band.

“(5th Ward Weebie) brought the love to the music, the life to the music. Bounce was him,” said local Jeffery Nixon.

Other fans say they will continue the artist’s legacy through his music.

“We take our culture seriously in New Orleans. It’s something people live for and breathe. (5th Ward Weebie) will be remembered because the people are going to continue to do the music. The artform will continue to develop,” said Torrence Brannon-Reese.