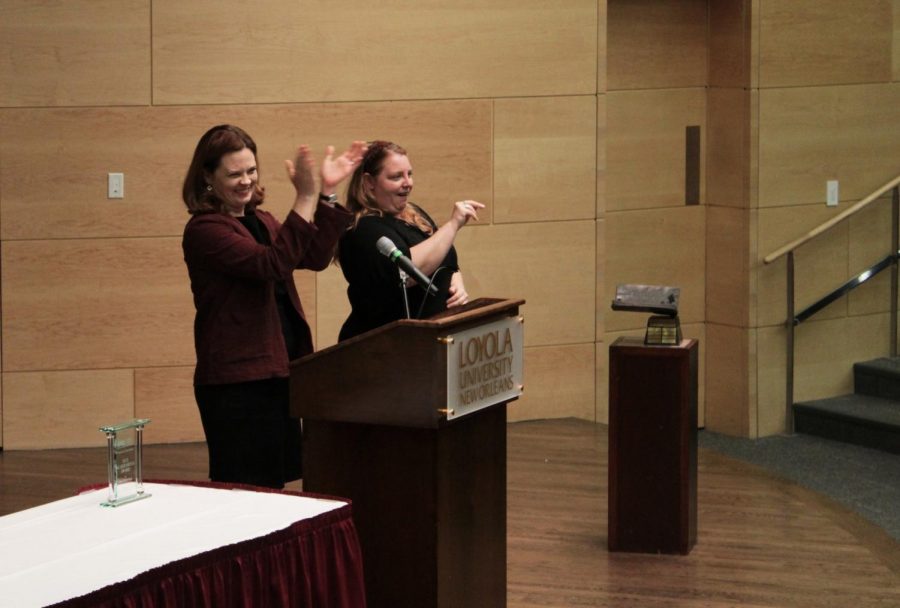 President Tania Tetlow speaks at the Spring Convocation in Nunemaker Hall on Jan. 17, 2020. Tetlow shared news about the university's financial situation at the ceremony.

The optimistic reminder that Loyola has been taken off probation by the Southern Association of Colleges and School commission on Colleges last month was President Tania Tetlow’s first matter of business at last week’s Spring Convocation.

In addition, numerous faculty members were recognized with awards for their work at the university and the University Senate Award was given to five recipients for their work in research, technology, service and advising.

Amid the celebrations, Tetlow provided budgetary updates, saying not much had changed since Fall Convocation.

However, some budgetary misses in the fall, including lower than expected online marketing revenue mean the university must continue to be prudent and live within a balanced budget.

“We’ve seen no actual increasing cost over what was budgeted. The only difference is by changing online partners, we’re going to save money in the long term by paying some of those recruitment costs more upfront this fiscal year,” Tetlow said. “Ultimately, it will be a decrease. It’s just a change in time.”

Tetlow also told attendees the university is holding back 10% of operating expenses to see how they may affect the institution.

“Another thing, in the last few years, we’ve tended to overperform our budget expectations at the end of the year,” Tetlow said.

Tetlow also expressed her desire to care for university employees and avoid any personnel cuts as budget saving techniques.

Tetlow emphasized that although being taken off probation removes the university from danger, there isn’t much margin for error.

“It means we can focus a whole lot more time on actually running the university instead of documenting how we run the university.”