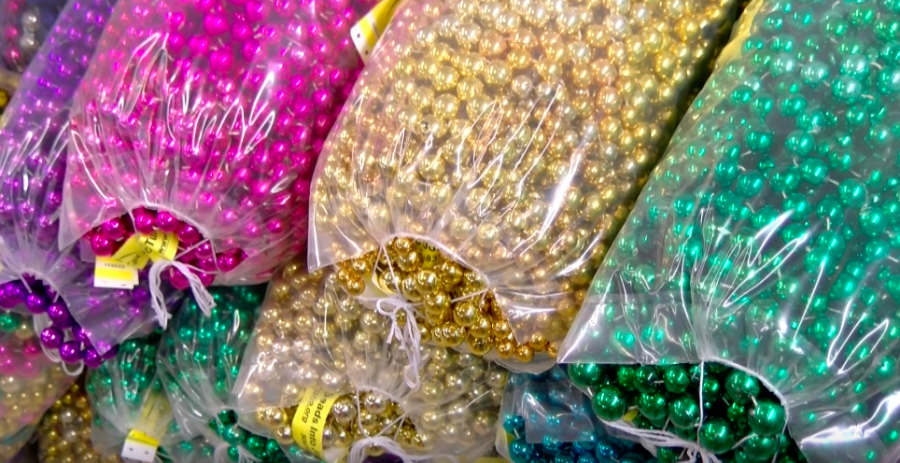 In early January, ArcGNO signed formal agreements with the Krewes of Centurions, Excalibur and Rex to provide them special packages and recycled beads for their members to throw during parades. Photo credit: Jade Myers

It is what some are calling history in the making––three krewes are going green just in time for the carnival season with the help of a local non-profit organization.

“This year is a pretty historic year for the Arc Recycling Center, and we’re very excited to be able to serve our community,” said Toni Wright, manager of the Arc of Greater New Orleans Mardi Gras Recycle Center, a non-profit that supports people with intellectual disabilities.

In early January, ArcGNO signed formal agreements with the Krewes of Centurions, Excalibur and Rex to provide them special packages and recycled beads for their members to throw during parades.

According to Wright, the recycling process for Mardi Gras throws is not easy. The recycled throws are first collected, sorted, repackaged and then sold in their retail store. Moreover, packaging beads is time-consuming as they are sorted into specific categories.

“Since Carnival 2019, we have taken near 400 thousand pounds, which is a hundred tons of recycled throws,” Wright said.

While these partnerships support the organization’s mission of “working to secure for all people with intellectual disabilities opportunities to develop, function and live to their fullest potential,” it benefits the environment too.

“I think the fact that Krewes are starting to look at using recycled beads is wonderful,” Director of Environmental Communication at Loyola Bob Thomas said. “If you recycle them, then you’re not buying new ones and putting new ones into the mix.”

According to Wright, the partnership was initiated at a point in time when people were becoming more environmentally conscious.

“Our culture has changed, and people are more aware and participating in initiatives for recycling to build sustainability in our community,” Wright said.

Rex Organization Quartermaster Steven Ellis said the idea to partner with ArcGNO came from his awareness of the heavy plastic use during the Carnival season.

“We’re just importing more and more plastic items, and it’s ending up in places it shouldn’t, and we said, let’s try to do something about that,” Ellis said.

In addition to feeling good about having eco-friendly throws, Ellis said it was “an added benefit” to partner with ArcGNO.

“I think they’ll be growing with us every year, and we’ll be buying everything they can give us,” Ellis said.

The more beads that are brought into the Recycling Center, the more it helps keep workers employed and allows people like Wright to continue to serve the community.

“I’ve been doing non-profit work now for 20 years, and my passion has been to serve underprivileged communities here in my city, and so being a part of the Arc, I get to do that,” Wright said.

This Mardi Gras season, ArcGNO’s partnership with krewes serves others and the environment by recycling one bead at a time.