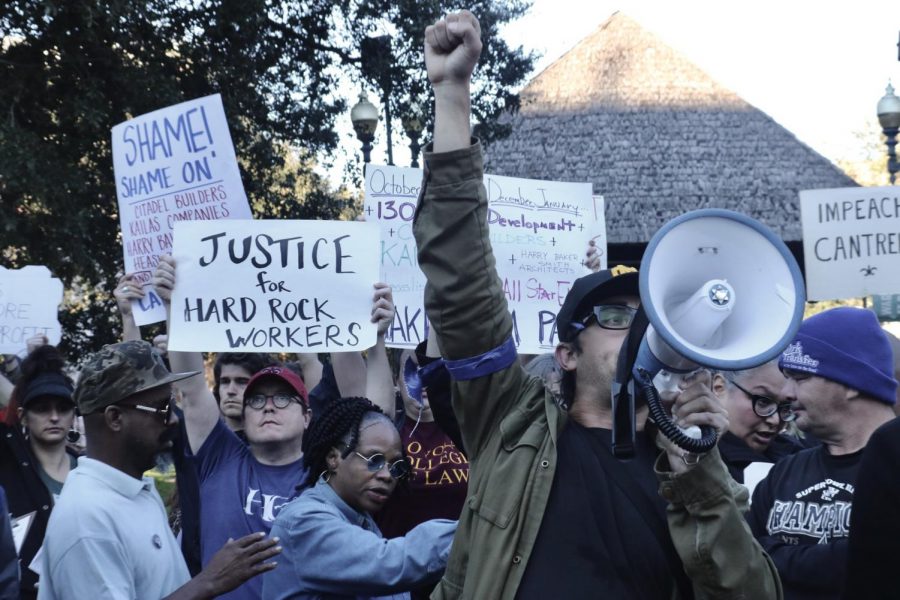 Trey Monaghan leads a march for the Hard Rock collapse victims from the site to Duncan Plaza on January 24. 2020. Photo credit: Andres Fuentes

More than 100 days after the Hard Rock Hotel site collapsed, advocates took to social media to organize a march in support of the victims and their families on January 24.

The collapse killed three construction workers, with 63-year-old Jose Ponce Arreola and 36-year-old Quinnyon Wimberly still trapped inside among the rubble. 49-year-old Anthony Magrette also died in the collapse. His body has been recovered.

Loyola law student, Savannah Lloyd said, “I’ve lived here through (Hurricane) Katrina and too much of this is reminiscent of them.”

Earlier this week, a red tarp that covered one of the trapped bodies was blown off in the wind, leaving the worker’s legs exposed. Social media posts trended with photos of the body and outrage toward city officials.

In a Facebook post, Mayor LaToya Cantrell said, “The condition of the building and the altitude above street level complicate efforts to replace the tarp, as they have prevented recovery thus far.”

After uproar on social media, the body was eventually covered with another tarp, but protest organizers felt more needed to be done for the victims and their families.

The crowd started their march just feet from the collapse site all the way to Duncan Plaza, which borders City Hall, chanting and waving signs along the way.

“It’s our job as citizens to hold our elected officials accountable and make sure they actually do what they say,” Monaghan said.

New Orleans City Council member Jason Williams spoke at the protest, saying, “I’ve been working with my team and colleagues since this happened, researching every time there was a building collapse in this country in the modern age.”

Williams said he wants the same amount of resources for investigating the Hard Rock collapse much like the previous building collapses in Philadelphia in 2013 and Atlantic City in 2003.

“I believe our city certainly deserves the same,” he said.

Williams and several other council members will vote on Wednesday whether to create a subcommittee to investigate the collapse, which several protesters supported.

However, the crowd demanded more be done by the mayor’s office.

Lloyd said, “I think she’s handled it from a more (public relations) stand point than anything else. People who are effected by this, they are the ones that need to be put first, not keeping a good name for the city.”

Along with more support for the victims, the protesters demanded an improved Responsible Bidder Ordinance, which grants construction contracts to companies based on their good standing.

New Orleans has an ordinance in place, but protesters said the policy needs more enforcement.

Marketing Representative for Smart Union, Steven Pasnewski, said things might have been different with better policies in place.

He said, “If somebody had a past history of doing things that are illegal, like misclassifying the workers, they would be potentially barred from the bidding process on any works through the city that have any money attached to them. A couple of these contractors through the development company do have that history.”

Hours after the protest, the city released a statement regarding the protest: “We appreciate and we share the frustration our neighbors and fellow residents are feeling, and the Cantrell administration is doing everything within our power to ensure the disaster is dealt with appropriately. We are taking every step to ensure that those responsible are held fully accountable. The legal and structural challenges associated with the collapse make this a long and complicated process, but we are committed to due diligence, full transparency and absolute accountability.”