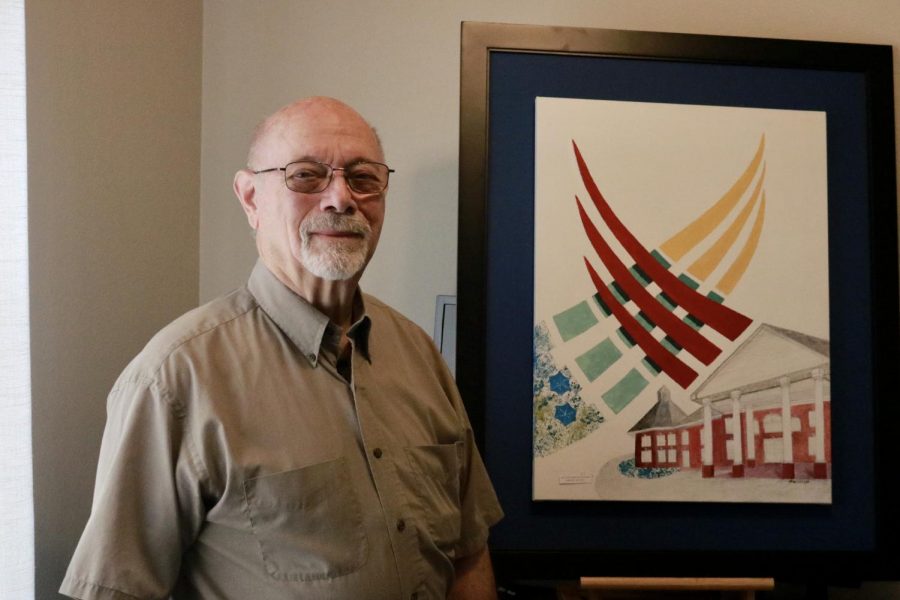 Norman Weinstein poses with a painting that incorporates the Pegasus Senior Living logo and the Laketown Village facility.

The elderly residents of Laketown Village live like a family. They talk, dine and share stories with one another, living in comfort and care. The facility houses retirees years after they’ve given up their profession, but 90-year-old Norman Weinstein can’t let go of what he loves.

Weinstein stays close as possible to canvas and his paints, ready to add to his collection of more than 200 art pieces.

The New Orleans native started art classes back in the 1980s, when his wife, Carol, challenged him to be more creative. From there, Weinstein blossomed, creating sculptures, photographs and other pieces for friends and family across the region.

He said, “I was never really into it to make any money because I would have starved.”

Weinstein always saw his art skills as a hobby, despite his talents bringing him first-place ribbons and profits at art shows. He even worked on church sculptures with his wife, which were some of his favorite memories.

He said he saw art as one of his favorite pastimes and nothing major in his life. However, his perspective changed last year.

As Carol began fighting with cancer, Weinstein was in need of direction. That’s when Judy, a worker at Laketown Village, decided to step in.

“She challenged me to do a painting for this institution,” he said. “I found out later she did it for me, not for her.”

Judy wanted Weinstein to create a painting that incorporates the Pegasus Senior Living logo with the outside of the assisted living center.

Weinstein took the challenge further, creating the logo painting and one of the center’s courtyard.

“It was well received by management and others that came through,” he said. “A lot of people say it looks nice.”

However, the only opinion that mattered to him was his wife’s, who got the chance to see the paintings before she died last December.

“She said they were ok so that made them ok,” he said. “It’s kept me motivated. It gets me through the day.”

Weinstein hopes that other people enjoy his work like his wife did. He said he creates his pieces in a certain style.

“I try and get people to walk into my painting,” he said. “Come on in and look around.”

Weinstein said he hopes he has made his wife, his two sons and four grandchildren proud with what he’s done with his life. He prepares to move out of his retirement home to live with one of his sons in Picayune, Mississippi.

Weinstein is sad to leave his friends and the Laketown Village staff, but he is excited about the new chapter in his life.