Carbon emissions plan to be net zero by 2050 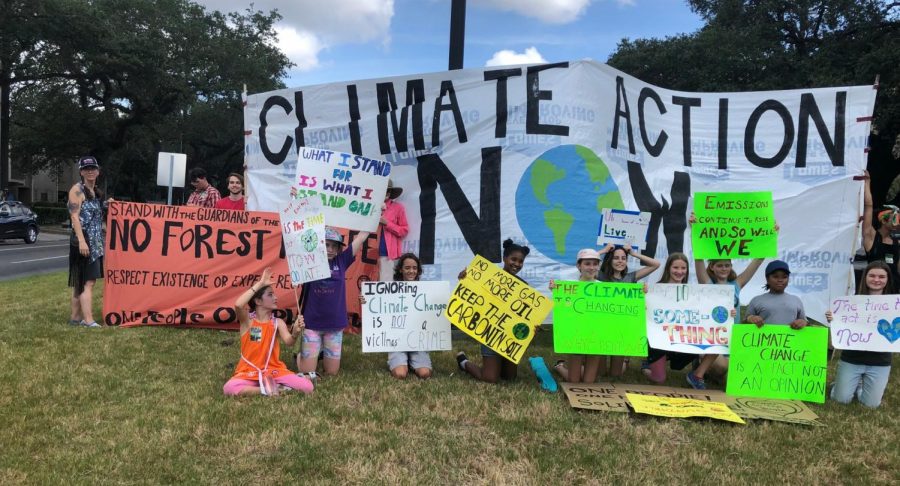 Activists protest on the median of St.Charles and Napoleon during the International Climate Strike on Sept. 20, 2019.

As the year 2020 begins with a plethora of environmental issues, many are wary of the inevitable end due to the factors of climate change.

These fears are especially prevalent in New Orleans as the city is currently sinking due to rising sea levels at a rate of 1.6 to 2 inches per year, according to NASA studies.

To halt this from happening, organizations from all over the city and even the country have drafted climate action plans.

In New Orleans, the Mayor’s Office of Resilience and Sustainability created a series of strategies that will be implemented to control energy use, transportation choices, managing waste, and creating an eco-friendly culture. Their strategies include reducing dependence on carbon-intensive fuels, transforming the infrastructure to reduce car dependence, launching a comprehensive waste reduction initiative, and expanding the local low-carbon economy.

Other states have also enforced a renewable portfolio standard or a requirement that utility companies have to increase the percentage of energy generated by renewable sources like solar, wind and geothermal, according to The National Renewable Energy Laboratory.

Casey DeMoss, the chief executive officer of the Alliance for Affordable Energy, said requirements also acts as “a guideline for utility companies” to source where their energy needs to come from and when.

“This energy needs to come from a resource that renews itself in a short time frame,” DeMoss said. “There is a bill that calls for the city of New Orleans to get 20% of their energy from renewable resources, and this must be put into place by 2025.”

However, the answer is not simple due to a variety of interests, DeMoss said.

“Some people believe that renewable resources should have low carbon-emitting sources like nuclear power.”

Entergy, an energy company engaged primarily in the Deep South, emits 50% of its energy from nuclear power, DeMoss said.

“The argument is that nuclear power is a better option than carbon. But nuclear waste is not much better than carbon,” s he said. There are better options for our dollars. Wind farms, solar energy and geothermal energy are three of the best options of the renewable portfolio standard, although they require more spending it will ensure more of a needed eco-friendly environment.”

For DeMoss, the desperation of the times has led her to support a plan that phases out nuclear energy within the next 20 years.

“There is not a lot of time to stop emitting carbon before there is a crisis and nuclear energy is the only way,” DeMoss said.

With little time and a lack of action, DeMoss said she is frustrated.

“America has to use less and make it mandatory,” she said. “But in this political climate, this discussion is nowhere close to priority No. 1”

“It is crucial to get to 100% renewable resources by 2040 and move away from fossil fuel sources for energy,” Torres said.

According to Torres, the projected time has been followed by heaps of controversy.

“The timeline is a funny thing,” Torres said. “Some people say that 2040 is too soon and others say it is too long.”

In her respective opinion, Torres believes the goal of 2040 is attainable to switch over to renewable sources.

“I believe that this goal is very attainable with more persistent public and government outreach,” Torres said.

However, she said the plan comes with a series of obstacles.

“This plan is not the status quo,” Torres said. “It requires investments, mass change, and it is not profitable to make the switch to renewable energy. The more you invest in an energy asset, like a plant, the more money you can make.”

The future of carbon emissions, Torres said, is in the hands of the citizens it affects.

“Ultimately, the citizens of New Orleans and America have a voice in this crisis and the know-how that is necessary to take action,” she said.