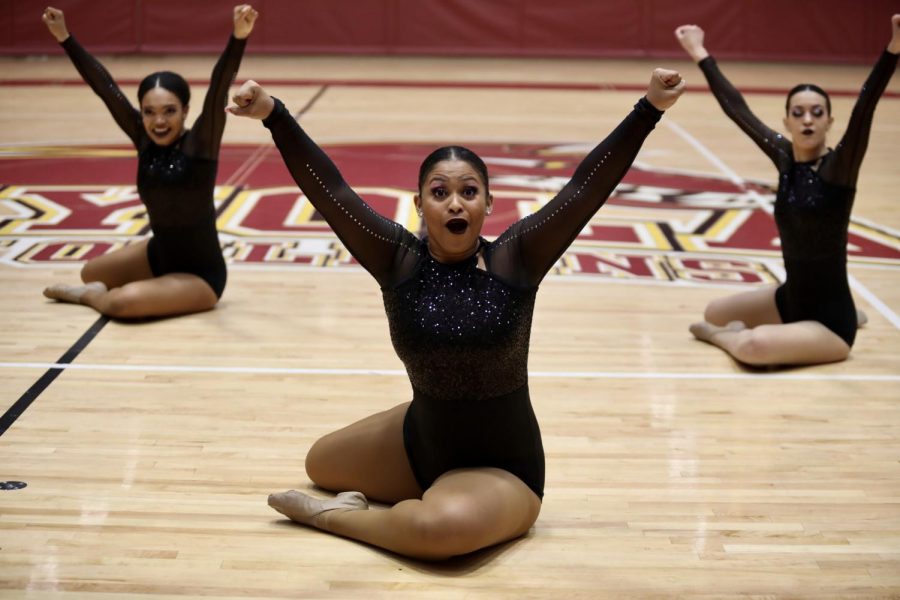 The Wolf Pack dance team makes room for another championship banner, as the program earned the Southern States Athletic Conference title for the fourth year in a row.

On Feb. 1, the Loyola squad defeated Martin Methodist with a total score of 91.75. Since the sport was recognized by the conference, Loyola has captured all four titles, the past two on their home court.

Assistant coach Tiffany Wells said, “(The dance team) are the girls that call you late at night, the kids that bug you early in the morning, but the kids that do all the hard work that you need them to do to put on a really great performance.”

All three made the All-Conference Team this year. Biology freshman Lexie Guerra also earned a spot and King was named Best All-Around Female.

“All the times that we spent in practice in the mornings have paid off,” King said.

King felt that being a part of a winning program gave her team the need to win the conference championship this year.

“It’s a confidence booster, definitely. It makes us continue to keep working. We want to fill this whole entire gym (with championship banners),” she said.

Now the team has their focus on regionals, with the hope of building off last year’s fourth place finish. Returning dancers feel this team has an edge on last year’s group.

King said, “Our freshman our amazing. It’s good to have new faces on the team. It’s also good to bring in people from other states.”

The cheer team also earned some praise, finishing in third place for the second year in a row with a score of 83.5. The final tally was more than last year’s but was not enough to beat out Mobile and champion Point University.

“It’s really an honor to do it for Loyola,” Conway said. “I’m really excited to have won. It’s really a team effort though. We all deserve it.”

Despite falling into the same placement as the previous year, Conway feels that this year’s team has improved.

She said, “Last year I really felt like we built off of (the conference tournament) and kept getting stronger. I feel like we are in a really good place this year to make moves at regionals.”

Assistant Athletic Director Jordan Gabriel felt that both teams accomplished something special at the conference tournament and was amazed by the support shown from the fans.

Gabriel said, “We know how hard they work to cheer on our basketball team, so watching everyone out here supporting them and cheering them on was surreal.”

She said her focus is on helping the program compete at the highest level possible.

“If they just need me to run a water bottle in the middle of practice, that’s what I’m going to do so they can just keep winning and keep the championships coming,” she said.

Both teams have their eyes set on the National Association of Intercollegiate Athletics Regional Competition on Feb. 27 in Pulaski, Tennessee.

Wells said, “We expect to go even harder than what you saw us do here for conference. They are going to put in more work. We’re going to work really hard, get our practice days in and be ready to go.”