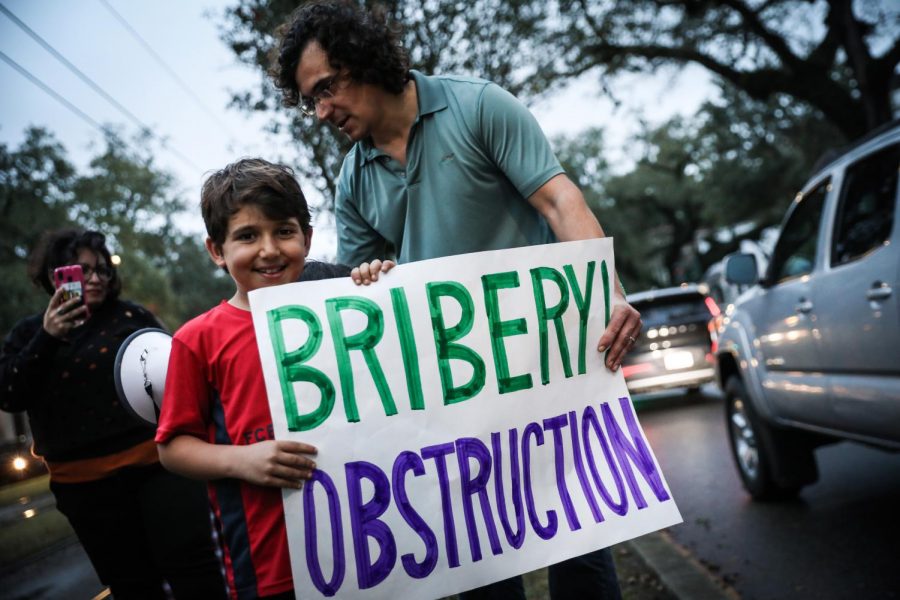 Protestors of all ages lined the busy street chanting, “Dump Trump!” and “Lock him up”, while carrying signs expressing their disapproval of the senate’s decision. Various activist organizations such as MoveOn and Extinction Rebellion sent out mass alerts to their membership calling them to protest the acquittal.

One of the many protestors was Daneeta Jackson, A’88.

“My big concern about the president is the environmental terrorism he’s perpetrating, especially on Louisianans” said Jackson. “Eighteen members of my family have “caught” cancer from environmental toxicity in the land, air and water here in Louisiana.”

“The Clean Water Act of 1972 protects our drinking water. The president just signed an executive order that rolls it back,” Jackson said. “The Guardian just did an article about how New Orleans has the worst water, it’s actually radiated. When I was a kid we used to drink water out of the hose, you can’t do that anymore.”

As motorists drove by many waved and honked their horns in approval, though that was far from the only reaction.

“Democrats suck!” yelled one woman from her car.

Protestor Pino de Candia came with his family to the protest, giving a megaphone to his young daughter so she could lead chants.

“We’re here to protest the acquittal of Donald Trump” said de Candia “I heard from MoveOn that they were doing this across the country, and I thought we had to come out and say something, make some noise, let them know it’s not okay.”

“The president is a sham, he’s a crook, he’s broken the law multiple times.” de Candia said “He invited other countries to interfere in our elections, he’s covered up his crimes, he’s obstructed investigations, he’s invited no witnesses to tell his side of the story under oath. We know he’s a liar, we can’t trust anything he says.”

Loyola graduate student Kathrine Silver was walking by the protest, and while she agreed with the protestor’s critiques of the president, she wasn’t convinced the protesters were accomplishing a great deal.

“He needs to get out of the White House. He’s ill educated and honestly comical. He’s not fit to be president.” said Silver. “The only thing I’m upset about is, with them protesting, what are they accomplishing? They got to have people who are actually going to make the most.”