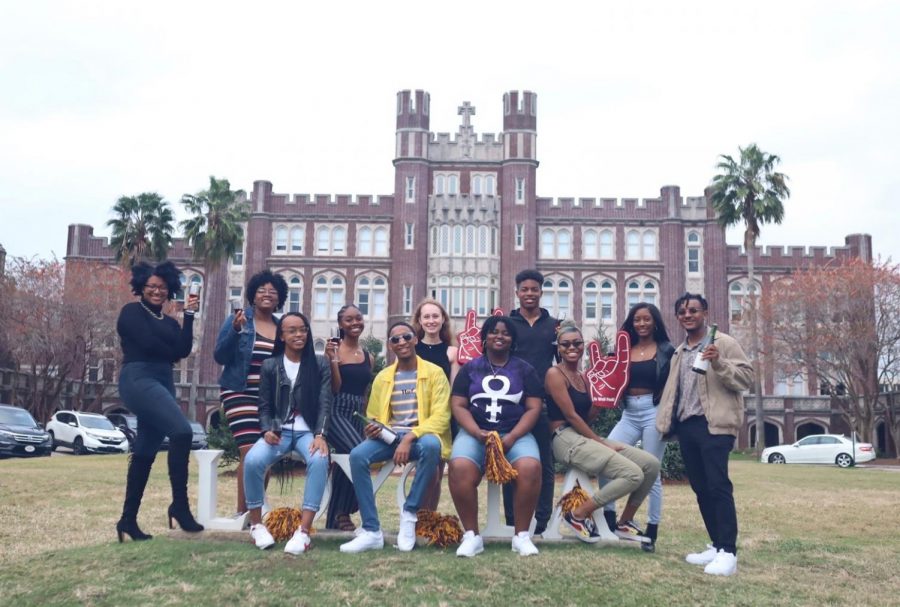 Members of Loyola's 2020 homecoming committee pose in front of Marquette Hall. The committee has been active since August 2019. Photo courtesy of Christian Riley.

After being off and on for a few years, the Student Government Association hopes to make homecoming memorable for both current and future students.

SGA has joined forces with the Residence Hall Association to bring Loyola’s own homecoming week back to life for the second time after more than 60 years without it.

“There’s going to be the cheerleaders and dance teams doing a performance. You’re going to be learning the homecoming chant. There’s going to be a powder paint fight, a countdown, prizes (we all love free things) and it’s right after the Mass, so you can go to Mass and right after, have a fun time in the Quad and then go straight up to your room after it if you live on campus,” RHA President Julia Signorelli said.

Signorelli said she wants this homecoming to be more memorable than the ones before.

While students can attend Lemon Pepper’s Yellow Party dressed to impress and flaunt their eclectic music tastes as they deejay battle at Silent Disco, the key is conversation, according to SGA Chief of Staff and homecoming chair Zontré City.

“We did so much research on why people like going to some events rather than others, and so many of our events are just spaces for you to connect and fellowship with other people,” City said. “Homecoming is really a space for you to say, “Whoa. You may be in my English class and I may have never talked to you before, but I’m in this one space with you –– why not. We’re at a bonfire rodeo. What do I have better to do than to talk to you?'”

The homecoming committee has designed a model that they hope will endure far beyond 2020.

“My wildest dream would be that this is something alumni would want to come back to, first and foremost. That’s what homecomings are: they’re about bringing alums back. Selfishly speaking, I think that was one of the reasons I was into it,” City said. “We spend money here, we’re spending time and it scares me to think that I won’t ever have a reason to come back here. That I could be 60 years old and I won’t have anything that pulls me back to come to the Loyola community.”

City also acknowledged the widespread lack of awareness for the first revival of homecoming that happened last year.

“Upperclassmen have seen different things. They’ve seen the homecoming last year, which was a smaller kind of event. It was the doughnuts, it was the basketball game –– those things. Some have seen no homecoming. So, I think that it’s really proving something to upperclassmen that this is going to be something fun –– just trust us,” City said. “That’s really what we’re just asking, which is a hard thing to ask, but just really trust us because our committee has thought about things for everyone and ways for you to not feel like this is a lame thing you just have to go to and do all these things for.”