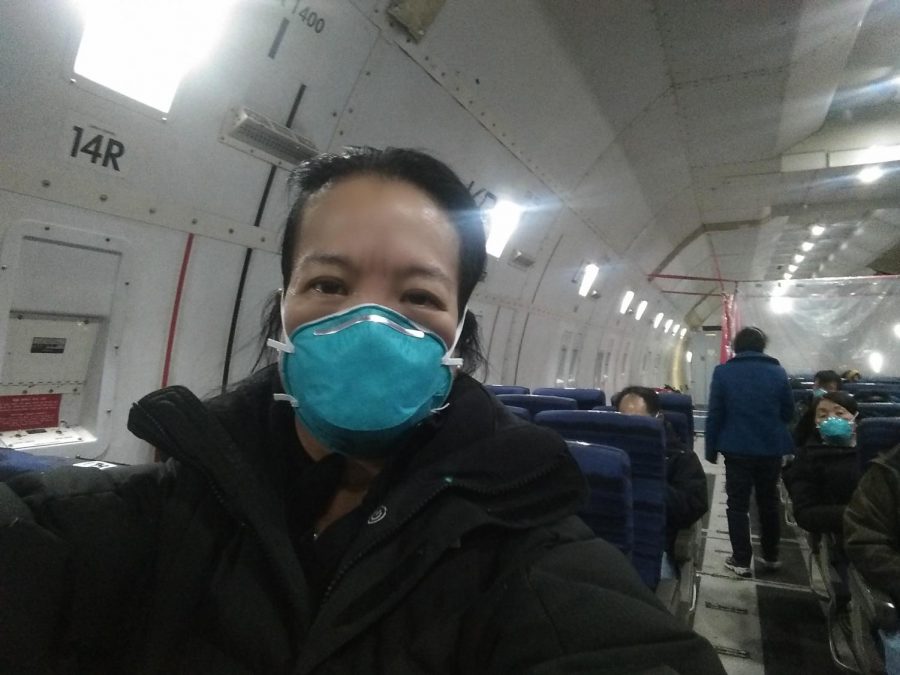 Loyola Law Professor Chunlin Leonhard sits on a plane out of China, her faced covered with a medical mask in the wake of the coronavirus outbreak. Leonhard was in China to study law under a Fulbright scholarship before having to leave the country. She is now in a mandatory two-week quarantine in California

Loyola law professor Chunlin Leonhard had her dreams of studying Chinese law cut short due to the deadly coronavirus outbreak. Now, she’s under a two-week quarantine period at a U.S. Air Force base.

Leonhard was excited to study ancient Chinese dynastic contract law issues under her Fulbright scholarship. The program would take her across the Pacific Ocean, closer to family she hasn’t seen in nearly 10 years.

However, after the turn of the decade, the fatal coronavirus outbreak began in Wuhan, just 250 miles away from where she was visiting loved ones in Songzi.

“At that time, I wasn’t concerned because it was far away enough,” Leonhard said.

She felt Chinese officials had the situation under control by locking down the epicenter from the rest of the country. But things rapidly changed.

She said, “Basically, all public transportation in the entire Hubei province was shut down. No busses, trains or airplanes.”

Leonhard’s situation took a turn for the worse once the Fulbright program cancelled their China operations, forcing scholars to scramble for a way back to the United States.

“I actually have never seen such collective panic before in China,” she said.

She joined hundreds of Americans trying to reach the nearest functioning airport with a flight scheduled for home. She said her only way out was to head to Wuhan for a plane set for California.

After a mandatory health screening, she finally got a seat on a plane, but her worries continued to grow.

“If I were to catch the virus at all it would be on the flight,” Leonhard said. “I knew I was safe back where I was in Songzi, but being on a flight filled with people from Wuhan made me nervous.”

Leonhard now stays at a hotel on the Travis Air Force Base in Fairfield, California along with hundreds of other evacuees.

She landed back in the U.S. on February 6 and will remain at the base for two weeks under a mandatory quarantine period.

Leonhard has not shown any symptoms of the coronavirus.

She said she’s doing what she can to avoid it, “The risk of cross-contamination here is pretty high if you don’t maintain the proper distance, and I’m certainly heeding that advice.”

She spends her day talking to friends and loved ones in the U.S. while also feeding the latest news of the virus back home to her family.

She said she’s glad to be relatively out of harm’s way but she’s worried about her family members she left behind in China.

“The news from the homefront is not good. My family is still safe but they have detected multiple cases of coronavirus,” she said.

Leonhard hopes Chinese officials can contain the virus soon, and that one day she can return to the country for her studies.

For now, she’s grateful for the support from her Loyola family.

“I am very grateful to my colleagues for all their wonderful messages and well wishes and some attempted humor to cheer me up. I’m also very grateful for the support from my dean, Madeleine Landrieu, and President Tetlow,” Leonhard said.