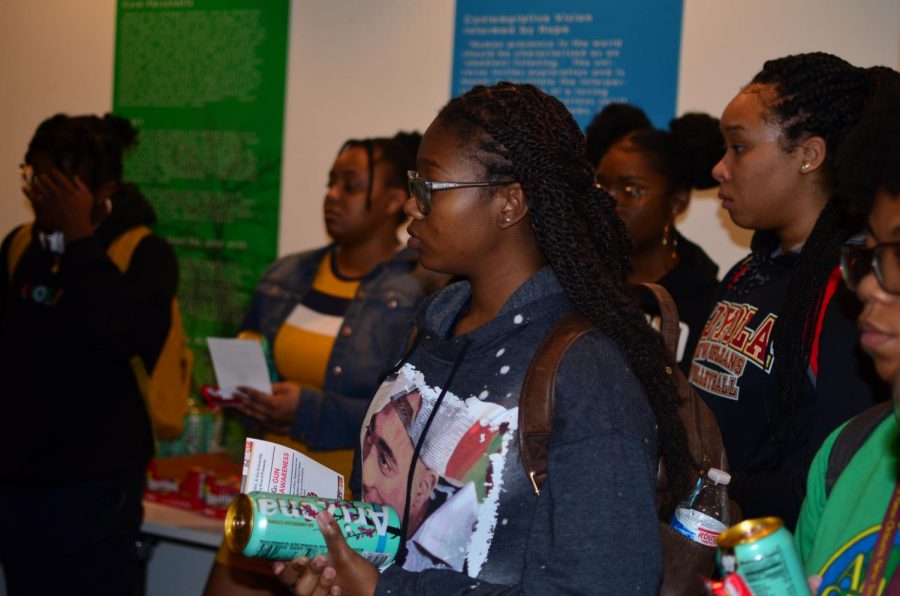 Students commemorate what would have been the 25th birthday of Trayvon Martin on Feb. 6. The Arizona tea and the Skittles they have was a symbol of his innocence during his aggressor, George Zimmerman's trial. Gabriella Korein/The Maroon.

In honor of what would have been Trayvon Martin’s 25th birthday, Loyola students from a variety of campus organizations gathered to commemorate his life.

Martin, a 17-year-old black man, was fatally shot in 2012 while walking home from a convenience store in Florida. The neighborhood watch coordinator who fired on the unarmed Martin, George Zimmerman, cited Martin’s “suspicious” hoodie.

Zimmerman’s acquittal five months after the shooting highlighted a deep-seated discord regarding race-based police brutality across the country.

According to Student Life and Ministry Office Manager as well as advisor for Living Our Vision Everyday and United Brothers Association Stacy Lewis-Goins, Martin’s treatment by Zimmerman is not uncommon.

“This is not a problem of past, this is a problem that is ongoing,” Lewis-Goins said. “This is something that happens all of the time in our neighborhoods.”

On Feb.6, spearheaded by Multicultural Leadership Council, L.O.V.E and UBA, the celebration involved selling hoodies and giving out items that would be symbolic of his experience in Martin’s honor. Later that evening, the organizations will also host a panel of greater New Orleanians that were affected by gun violence.

According to Lewis-Goins, the proceeds of the events will fund the causes of one of the panelists.

Mass communication junior and a member of the National Association of Black Journalists Christian Gilyard said that Martin’s story is important to tell in order to highlight police brutality.

“What happened to Martin exposes a lack of consideration for people of color,” Gilyard said.

According to criminology sophomore and vice president of MLC Cheyenne Williams, the incident also brought to light injustices suffered by the African American community in modern day society.

“It just showed how troubled the justice system is in America, which has been favoring the high privileged more than anyone else,” she said.

“We felt it important that the mothers’ stories be shared because we want everyone to consider their point of view when dealing with the topic of gun violence,” she said.

Darell Honora, UBA president and sociology sophomore, said he hopes that the event will bring awareness to the black community in addition to celebrating Martin’s life.

“It’s important for people like me to come together and be heard,” Honora said. “People should be aware of how it affects everyone involved.”

Thomas also said she is hopeful that the event will make an impact at Loyola.

“I am hoping that it will bring attention to the black community within the campus in the sense that we are giving African American students a platform to make their voices heard,” she said.