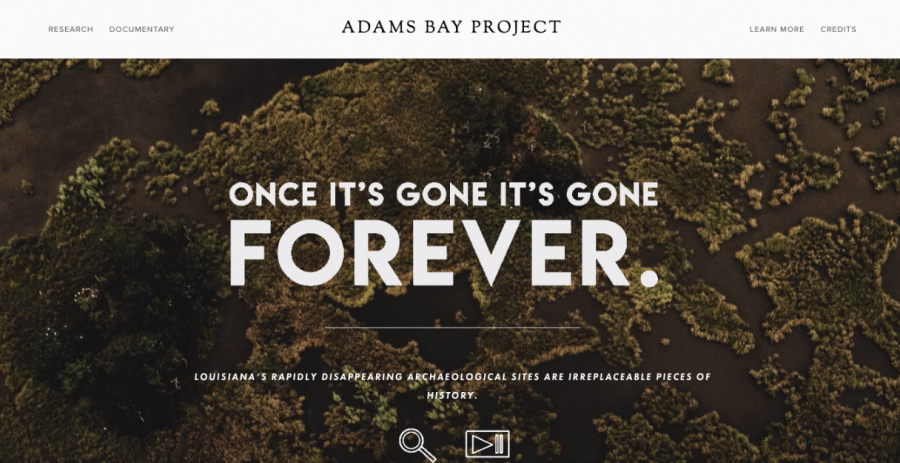 Peyton Finch created this website to help get the message and information about Adams Bay to the public in June, 2019. Finch also directed the National Geographic-funded documentary.

On the very southeastern tip of the Louisiana boot lies a lake in the heart of cajun country. Adams Bay, a lake in Plaquemines Parish, is threatened by the rising tides, as shown in a recently released documentary produced by Peyton Finch.

Finch, freshman at Loyola University New Orleans, was the mastermind behind the National Geographic documentary about Adams Bay.

“It was very scary mainly because the name National Geographic is attached to it, so you’re just like, oh my gosh,” Finch said.

Back in 2018, when Finch was still in high school at the New Orleans Center for Creative Arts, a few of her high school teachers asked if Finch would like to be a part of their project. They had received a grant from National Geographic to research the lake and the archeological importance of it. Her answer was easy.

Adams Bay is an area in southern Louisiana facing land loss, and the goal of the documentary was to present its story creatively so everyone could easily digest it. Finch played a huge role.

“It was sort of my creative vision in a way because I did all of the editing for it, I composed the website that the film is housed on,” Finch said. “I did all of the motion design and the interviews as well.”

The people of Adams Bay fueled the voice for the documentary, and it became its own character.

“What really mattered to me was that I was treating this issue with respect and treating it like a responsibility because in a way, it’s like you are kind of telling another person’s story,” she said.

One of Finch’s peers, Judith Breinin, helped her with a lot of the documentary process, doing camera work, audio, writing interview questions and helping Finch with the post-production of the film.

Breinin was also interviewed as part of the documentary, discussing what it was like to fight climate change close to home.

“I talked about my experience with my family going into the oil field and petroleum fields, and how that ties into our eroding coastline, and what it means for people in Cajun Country Louisiana, to have access to jobs in those fields while also kind of being part of the reason that our culture and the land that we’ve had in our families for so long is disappearing.”

Both women were excited to be a voice for something that means a lot to them, and it meant even more to both Finch and Breinin as young women in film.

“It’s very hard to be your own individual if you’re always comparing yourself to somebody else’s work and what they’re after, but I think it’s really important to stay grounded in what your values are,” Finch said.