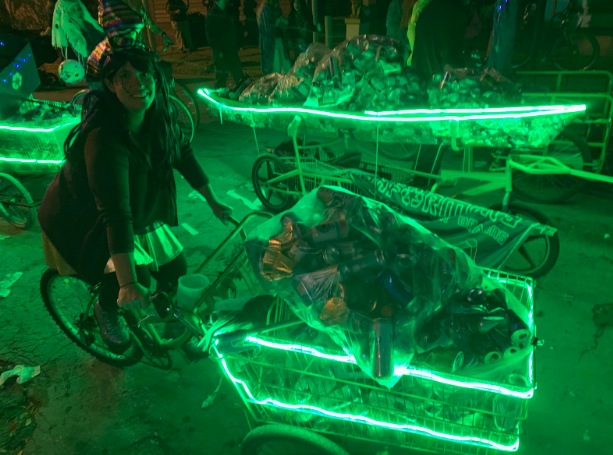 The Transformers collected recycled items during KreweDeLusion on Sat. February 8th, 2020. Courtesy of the Trashformers.

From the start of carnival season, we see tons of waste flooding the street and not recycled. An eco-activist group, called The Trashformers, is making sure recycling is being practiced during Carnival season.

The Trashformers recycle not after, but, during the Mardi Gras parades. Their technique is to use hybrid bicycles attached to shopping carts and a pirogue to collect trash. During the parade, the Trashformers encourage people to load the shopping cart with cans and plastic bottles.

“Setting up bins is actually not a great solution, people will actually contaminate them alot, put the wrong stuff in,” said Brett Davis, founder of the Trashformers. “I got to thinking, the best way to recycle at a parade, is to be in the parade. That way you have the ability to take stuff from the people and be interactive with the crowd.”

The group collects 20 to 30 gallon bags full of recyclable items. This is just a small amount of trash that carnival season brings.

“It has the benefit of making recycling a fun and engaging experience, “ said Davis.

The Trashformers want to educate the paradegoers on proper recycling procedures. This year gogo cups made out of number five plastic can not be recycled because of new laws.

“This year we can not recycle gogo cups. There are a lot of people coming out of bars who have number five plastic Gogo cups. As of May last year, when the recycling industry changed a lot in the US, it is no longer something we can recycle in New Orleans,” said Davis. “We have to tell people we can only take cans and number one and two plastic bottles. And it kinda teaches people the current state of recycling in New Orleans.”

All 20 plus members have a place in their heart for the New Orleans environment.

“This is not something we are wagging our fingers at people, but were helping people come in and be a part of the solution,” said Kevin Fitzwilliam, sustainability professional and Trashformers member.

Davis said he started the Trashformers as a way to give back to his city.

“Mardi Gras waste is really unique to my city. I’m from here, I grew up here and it’s sort of an issue I feel like I can have an impact on,” said Davis.

The Trashformers hope they can turn Mardi Gras a little bit more greener.

“Instead of handing things out, its taking things in,” said Mark Davis, member of The Trashformers.

During the 2020 Carnival season the Trashformes will participate in KreweDeLusion and the Red Bean parade.