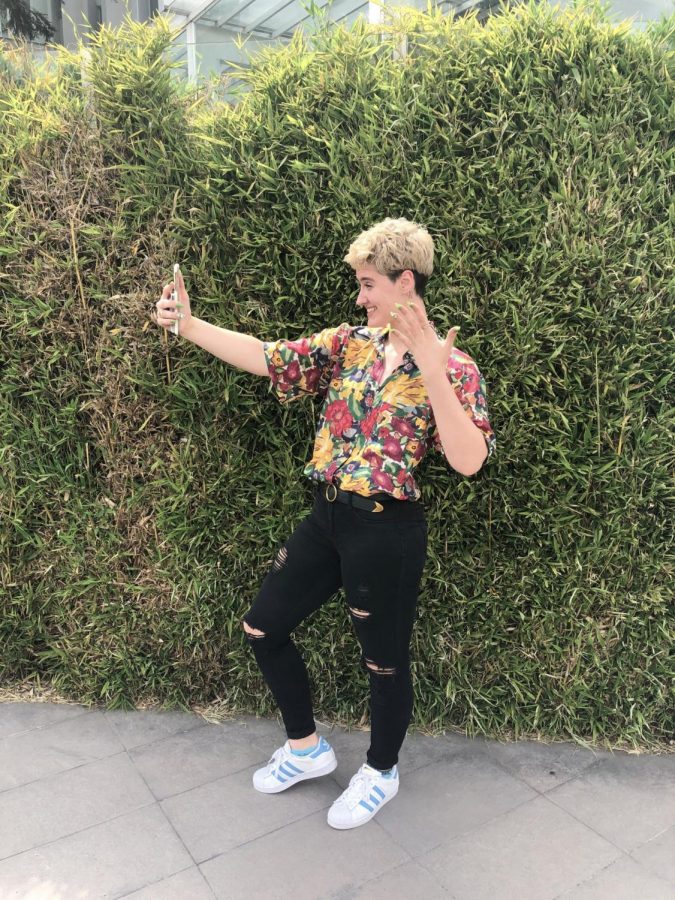 Aly Hetzel recording herself doing a TikTok. Her account, @cajunqueer, reaches over 50,000 every post. Courtesy of Aly Hetzel

Aly Hetzel never expected to go viral. In fact, she first downloaded TikTok jokingly as a way to follow her little brother’s videos.

“At first, it was just for making fun little videos to laugh at myself with friends, but then people started being like ‘oh, that’s so relatable’ or ‘oh, I totally get that. That’s so funny,’” Hetzel said. “So I was like ‘oh OK. I guess I’ll just keep making more.’”

Now, Hetzel’s account, @cajunqueer, has 1.3 million likes and more than 50,000 followers. She uses that platform to vlog about her queer experience.

“I remember specifically what

first blew up of mine,” Hetzel said, reminiscing about a TikTok she made to the song “Don’t” by Bryson Tiller. “The joke was my mom being like ‘Oh, I want biological kids.’ And then me coming in being like, ‘Hmm, what a shame.’”

The post had gotten over 8,000 likes — much to Hetzel’s surprise — which was by far the most attention that she had ever drawn in on a post at the time.

Since then, @cajunqueer’s popularity has only grown, as now several of her videos have well over 100,000 views.

“Another type of video that I do is me saying some random thing about the queer community,” Hetzel said. “I did a video where I was like, ‘Oh, I figured out why when women who love women get into a relationship, they move so fast. It’s because they don’t play games.’”

Hetzel said that through the jokes and memes she posts are relatable to the queer community, she hopes to promote positivity and support to others who may be struggling with their identity.

Amit Paley, CEO of the Trevor Project, an organization that provides crisis intervention and suicide prevention for LGBTQ youths, said in a Washington Post article that he sees plenty of examples where LGBTQ youth are getting support on TikTok.

“And that is so important because there are many LGBTQ youth in this country who are not able to get support where they physically are,” Paley said in the article.

Hetzel grew up not having a community she could go to or connect with, she said, and even today, the queer community at Loyola is still very small. But her personal struggles with exclusion and feeling different are big motivators in how she uses her platform today.

Though Hetzel has had to face her fair share of internet trolls trying to bring her down because of her sexuality, she said that has not stopped her from being the queer advocate she wants to be.

“I want to be that queer role model for other youths who are figuring themselves out,” Hetzel said. “It’s really comforting to know I do have a place and a platform to discuss queer culture with others who get it and I can be that role model for someone.”

One of the most fulfilling things for Hetzel is when her viewers message her about personal struggles, asking her for advice on how to come out. Some viewers have even told her that they shaved their head because of her.

“The fact that someone trusts me with this very personal and big thing about themselves. It’s really touching that people feel safe to confide in me,” she said.