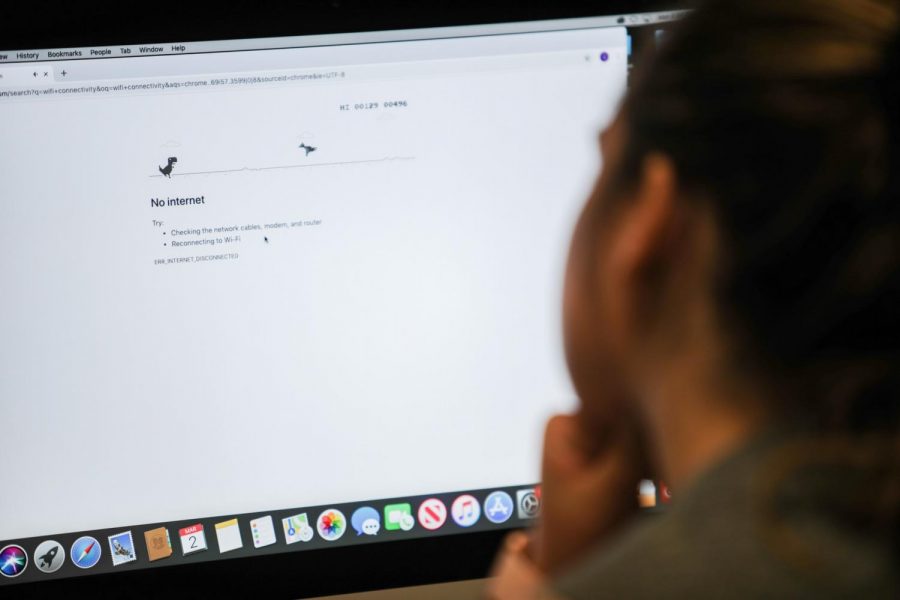 In December, a five hour long Wi-Fi outage swept campus during finals week, disturbing the studying of many students and work of many professors. Assistant Professor Lisa Collins said the outage wasn’t like one she had seen the campus struggle from before, and that she was completely unable to work on campus.

“I could not even use my hotspot. I ended up leaving campus to get work done,” Collins said.

“We believe most of these issues are related to the speed of the internet,” Locascio said. “We are working with our providers to increase speed and bandwidth with our existing infrastructure.”

Collins said a Wi-Fi issue she has faced is the University not being prepared for the bandwidth required in certain classrooms. During the fall semester, Collins faced Wi-Fi difficulties while teaching a lecture of 120 students in a classroom built for 160. Students consistently struggled to connect to Wi-Fi in the classroom, and when Collins went to IT with the issue she was told the room could not support Wi-Fi for more than 60 devices.

“I feel that Loyola’s WiFi access is not well planned for the campus population,” Collins said. “I do not understand why a classroom designed to hold so many people would not have more Wi-Fi access. It took nearly the entire semester to get a resolution, which eventually involved adding a second Wi-Fi access point. I am happy the IT department found a solution. But I feel it should be more proactive to prevent such problems.”

Collins said she tries to “give students the benefit of the doubt” when it comes to their work being impacted by internet issues, and that she does not have a set classroom policy when it comes to having trouble accessing online materials.

“I use the university’s boilerplate policy about natural disasters, but I have never thought I would need an internet outage policy,” Collins said.

Locascio said the outages have caused IT to investigate changes for campus Wi-Fi. He said the campus uses the internet from two providers, and IT has installed redundant network switches as well as upgraded their electric power in the main network closet.

But while Locascio said these changes have been made, Collins said they have not been communicated to the campus.

“We also have had no explanation from IT about what’s causing these issues or what they plan to do to prevent them from happening again,” Collins said.

Locascio said the next semester will be a time for IT to continue improving the internet experience on campus.

“Every semester we look at what we can do to improve our network and Wi-Fi,” Locascio said. “In the next fiscal year we will be looking at the Wi-Fi, upgrading our firewalls and increasing bandwidth to the internet for every campus building.”