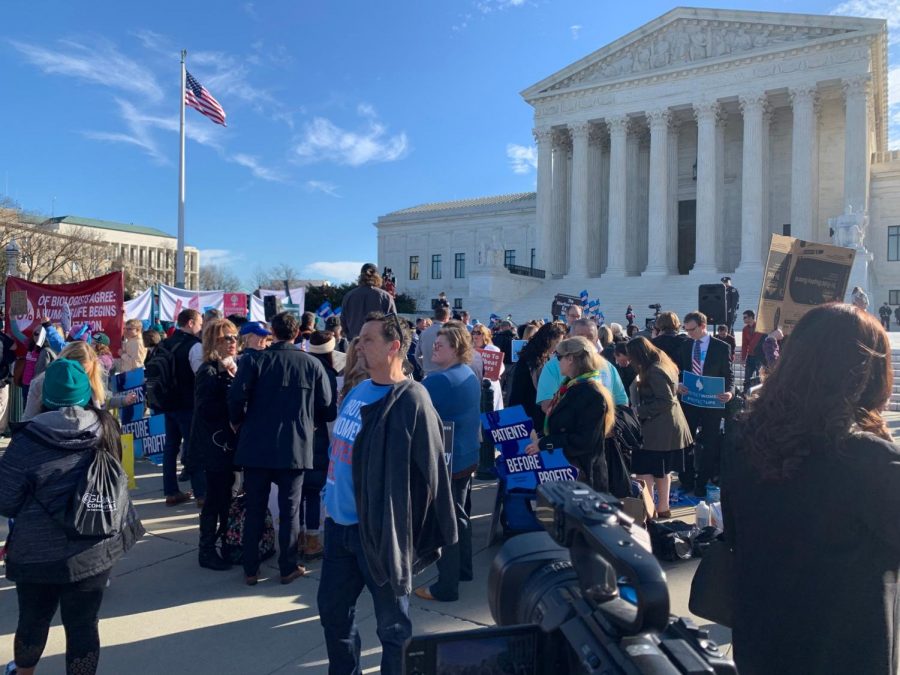 Protesters gather outside the Supreme Courthouse in Washington D.C. on Wednesday, March 4. Hundreds gathered as the Court began oral arguments in a case regarding a Louisiana abortion law. Lily Cummings/ The Maroon.

WASHINGTON — On March 4, hundreds of protesters gathered in front of The Supreme Court of the United States in response to a 2014 Louisiana abortion law being contested before the court.

The law, known as the “Unsafe Abortion Protection Act,” requires Louisiana abortion doctors to have the ability to admit patients to a nearby hospital should they perform an abortion.

According to the Associated Press, the law was temporarily blocked by the Supreme Court a year ago but if the law is found constitutional just one of Louisiana’s three abortion clinics would remain open.

At this time, only one doctor in the state of Louisiana has admitting privileges and would have the ability to legally perform abortions under the law.

Inside, the Supreme Court heard oral arguments, but outside protestors from across the country shared their opinions on the law.

Kristan Hawkins, president of Students for Life of America, was one of the many people rallying for the law’s constitutionality.

“Many of us believe there are now five pro-life Supreme Court justices, which is why those who advocate for abortion are so incensed about this law,” Hawkins said.

President Donald Trump’s appointments of conservative judges Neil Gorsuch and Brett Kavanaugh have led some people to fear about the future of Roe v. Wade and the right to choose.

But others see it as a necessary medical precaution.

“This law isn’t about legal access to abortion,” Hawkins said. “This law is about whether or not abortion clinics should be held to the same safety standards as other surgical facilities throughout the state of Louisiana.”

Since the law was signed in 2014, many abortion clinics have closed, leaving Louisiana with three clinics in Shreveport, Baton Rouge and New Orleans.

Joanna Morganelli, a pro-abortion rights non-profit worker and Maryland resident, said although Maryland has been a haven state where abortion isprotected, she believes women shouldn’t have to travel to get an abortion.

“You don’t need to do that if you need knee surgery or to see your primary care doctor,” Morganelli said. “Abortion is one of the most safe procedures, it’s safer than a colonoscopy.”

Toni Van Pelt, president of the National Organization for Women, said the law is unfair to women accessing healthcare.

“This is an undue burden on women. It’s closing clinics,” Van Pelt said.

The Supreme Court’s is expected to announce its decision on the case in June.