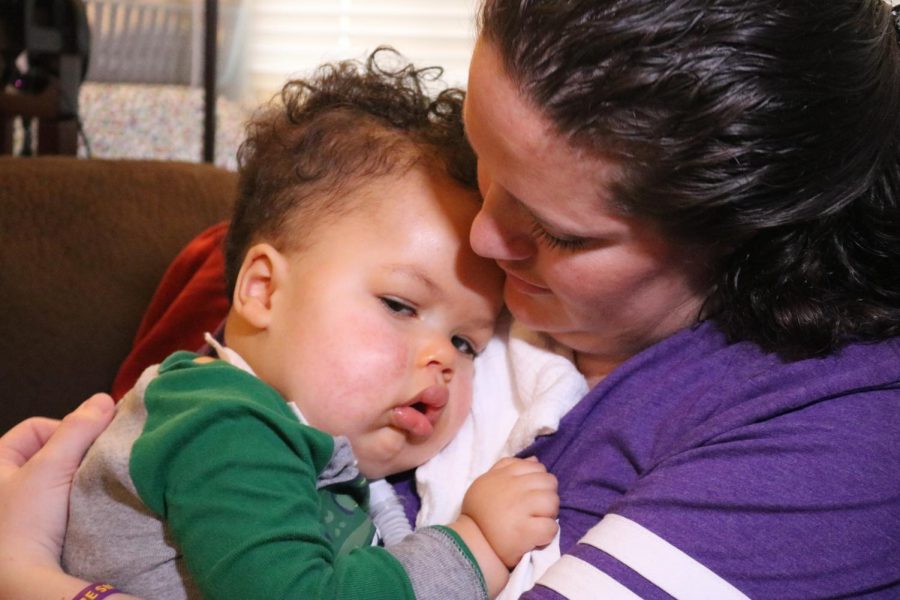 Andrea James hugs her 19-month-old son Axel Dennis. Axel Dennis has entered into a legal battle with Louisiana Healthcare Connections in a last-chance effort for a life changing medication.

After being twice denied a drug that could completely improve his quality of life, 19-month-old Axel Dennis enters into a legal battle with Louisiana Healthcare Connections in a last-chance effort for the medication.

The Baton Rouge native suffers from Spinal Muscular Atrophy Type 1, a genetic disease that creates a loss of nerve cells in his spinal cord.

His state fair hearing concerns whether or not healthcare providers will pay for Zolgensma, which is a single-dose medication priced at $2.1 million.

After his first day in court, Dennis’  mom feels frustrated.

“(Louisiana Healthcare Connections) they are basically saying that (Dennis) is so far gone, that he is so close to death that Zolgensma, a one-time drug, would not be enough for him,” Andrea James said.

The insurance agency claims that because Dennis uses a trach tube and shows signs that his condition is worsening under his current medication, Spinraza, a dose of Zolgensma would not improve his quality of life.

James denies the claims, saying her son is close to spending all waking hours without the ventilator.

“I have both of his specialists telling me he has a very good chance of coming off the vent,” she said. “We are fighting (Louisiana Healthcare Connections) saying he’s almost dead.”

“If you look at Axel, if you have a chance to meet him, you will see that he’s plenty there and very engaged,” he said.

Originally, healthcare providers denied Dennis’ requests for Zolgensma because of his progress he was making while on Spinraza. Both his mom and lawyer are shocked at the agency now giving a reason completely opposite.

“The position as (Dennis) was first denied was that he hadn’t deteriorated and at the same time was too far advanced,” Kelly said. “Those are two conditions that can’t exist at the same time with the same patient, unless you are an insurance company.”

The battle for Zolgensma is a race against time. The FDA only approves the drug for patients under two years old. Axel’s will reach that milestone this coming July.

“The process has become so ridiculous and scary,” James said.

While Kelly feels confident in the legal process, James reaches out to Louisiana officials that can help her son.

The insurance council tells Kelly that Governor John Bel Edwards and Louisiana Department of Health officials can approve the life-saving treatment for Dennis.

James hopes that the people with the power to help fight for her son will open their hearts at Dennis’ plight for a better life.

If Dennis is denied the medication for a third time, his family hopes to pay for the treatment using funds from his GoFundMe page. Right now, the page is at $14,400, far from its more than 2-million-dollar goal.