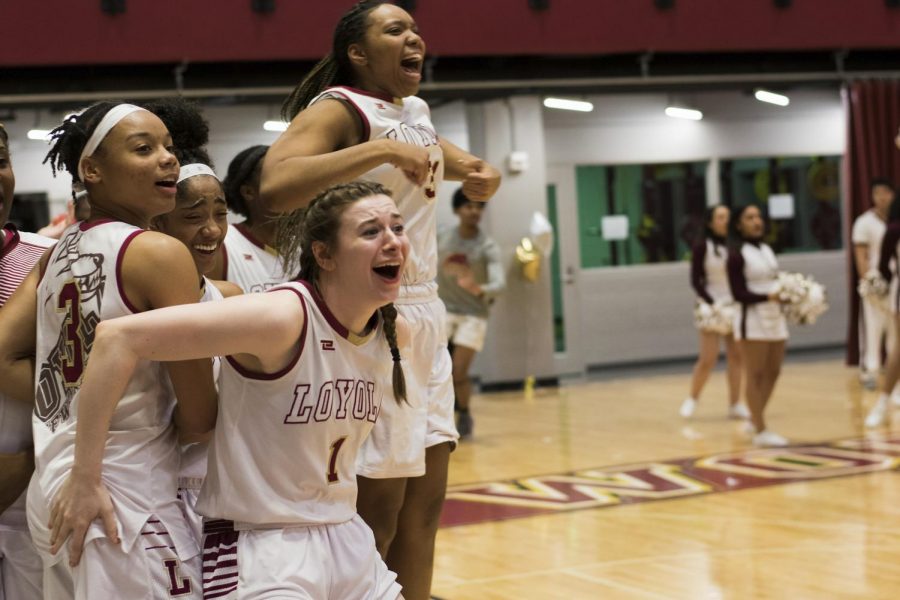 On the evening of March 11, both Loyola basketball teams gathered to watch the 2020 National Association of Intercollegiate Athletics Tournament selection show, where both teams earned the right to compete for a national title. Less than 24 hours later, they knew that tournament would never be played.

“It wasn’t too long after, thirty minutes, maybe fifteen minutes…that we got an email that said all winter sports championships had been cancelled,” Hollowell said.

The NAIA announced its cancellation of all winter sports championships, on the morning of March 12 amid concerns over the spread of COVID-19. The decision came following the National Basketball Association’s decision to suspend their regular season and the decision of many universities, including Loyola, to transition from in-person to online classes for the remainder of the Spring semester.

“It was an abrupt end to the season, and we weren’t expecting it to happen like that,” said women’s basketball head coach Kellie Kennedy. “My team certainly did not end [the conference tournament] the way we wanted to end our season. One thing I told them was ‘hey guys, the best part of this is that we get to play again,’ and I think the team was really excited about that and not ready for it to be over.”

Most players in the basketball program were able to return to their homes relatively quickly with one notable exception — physics junior Josh Leaney. Leaney was faced with the daunting task of organizing a flight back to his hometown of Brisbane, Australia amid the chaos of the COVID-19 outbreak.

“It was kind of frantic,” Leaney said. “I had to organize my flight before campus closed, and the options were becoming very limited as I kept searching for return airfares. I had to book a one-way flight because I didn’t know how long this would last, and I made sure to consider how long it would take me to pack my entire dorm up and get it to places with time to spare.”

Leaney was the last basketball player to leave campus as he managed to book a flight home for Friday, March 20.

“My plane had 20 passengers on it to Los Angeles, and that was kind of freaky” said Leaney “My flight was, in total, 24 hours long from NOLA to Los Angeles and then from Los Angeles to Brisbane, Australia. That was a rather normal trip, but if I hadn’t been vigilant it could’ve taken me almost 49 hours to get home.”

Leaney said he was a bit surprised by the lack of medical attention passengers received upon arriving in Brisbane.

“COVID-19 is typically asymptomatic, and the health officials in the airport were relying on people to self-diagnose,” Leaney said. “Some may have had it but if they were asymptomatic they would’ve never known. That kind of shocked me.”

Leaney is now in self-isolation at his home in Brisbane and is working to resume his education from halfway across the world.

One key difference between the two Wolf Pack squads is the presence of seniors. While the men’s team had no seniors on the roster this season, the women’s team relied heavily on their senior leadership.

One senior who was vital to the Wolf Pack’s success is guard Paige Franckiewicz, a four-year starter who made the Southern States Athletic Conference All Tournament team after averaging 16 points a game during tournament play.

“Abrupt is probably the best way to describe it as we were quite literally thirty minutes out from practice when I saw [the cancellation] on the NAIA’s twitter,” Franckiewicz said. “Usually the end of the season is very ceremonious. There’s a party, and there’s a big speech, but then suddenly, we were in the locker room turning in our stuff and packing up as quickly as we could to go home.”

Franckiewicz and her Senior teammates were suddenly confronted with the fact that they’d played their last game in Maroon and Gold. Franckiewicz described her emotions surrounding the end of the season as conflicted.

“My whole senior year there was definitely a sense of finality, but it always felt like (the end of the season) was this far off date,” Franckiewicz said. “Then all of a sudden, it wasn’t. It was right in front of us. I still don’t even know if I’ve really comprehended it. It’s a really weird, really unceremonious way to end a career.”

Franckiewicz won’t be going far, however, as she plans to begin law school at Loyola this coming fall.

“I have some comfort in knowing that even though this was something that was so abruptly uprooted, I don’t have to say goodbye to Loyola yet.” Franckiewicz said, “I’m going to go to as many games as I can, and I’ve already talked to some of my teammates, especially underclassmen, about helping them brush up on shooting techniques. They all mean so much to me. I feel like they’re all like my younger sisters, so I really want to be supportive in any capacity I can, whether that be with basketball or emotionally.”

While the players and coaches may have had their seasons ended and their lives uprooted, the feeling around the program was that what’s happening is bigger than basketball.