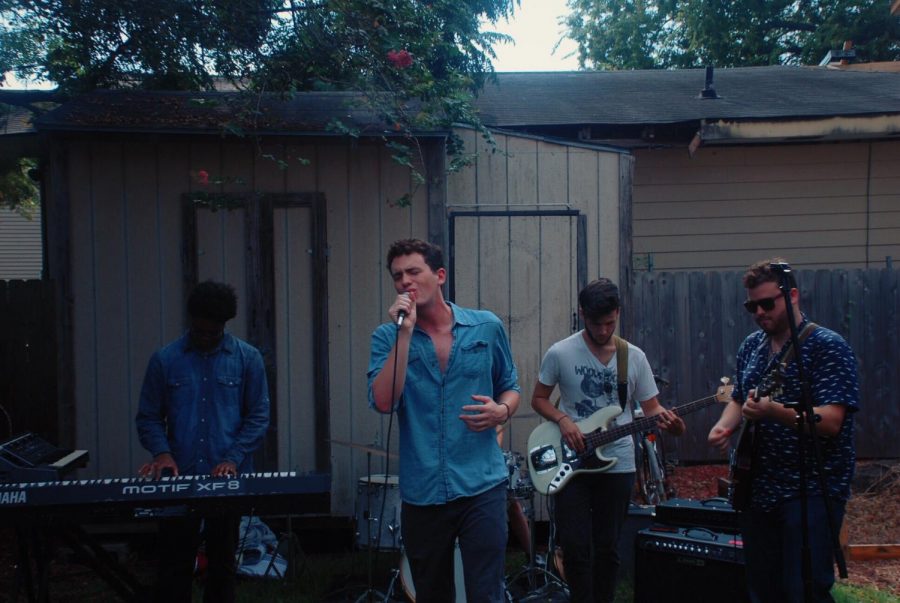 Sean Hobbes + the High Res hold a performance. Hobbes is currently working on raising funds for a campaign to have his first solo EP played on the radio. Courtesy of Bailey Barkley.

For Loyola senior Sean Mulligan, the dream of hearing one of his songs is only $2,100 dollars away from becoming a reality.

During the school year, Mulligan, who performs under the stage name Sean Hobbes, went to one of his professors seeking advice on how to best release his upcoming EP. His professor recommended getting people in the industry involved giving him the names of some radio promotion companies.

“I sent my project to them and within a couple of hours, two of them had gotten back to me,” Mulligan said.

According to Mulligan, these companies said that they believe there is a big opportunity for him as many of the major and independent labels have pushed back their releases due to coronavirus, allowing for a smaller independent artist to get radio airtime without much competition.

The only thing standing in Mulligan’s way now is the cost to work with these companies. To raise the money needed, Mulligan made a GoFundMe page which, within two days, received a little bit under half of the amount needed with $1,047 dollars.

Mulligan said he has been flattered by the amount of support received over a short span of time and how people are donating even with the coronavirus situation going on.

“To be the good news during times right now that feels so drawn out and bleak and uncertain, for people to latch on to this cause to support it, it’s very humbling,” he said.

The money raised will go toward the company manufacturing physical CDs to send to radio stations to play. From there, they will be able to tell Mulligan where his music is being well-received.

“That kind of stuff is super valuable for my career going forward because that’ll tell me where my fans are, who my allies are out on like a touring circuit and what markets I should really be focused on developing,” he said.

The music that will be playing when Mulligan raises the money will be off of his first solo EP, The Cyclic Nature of Love. Mulligan said that he spent a lot of time wondering why he should release an EP, which contains four songs, instead of releasing singles instead. He said that he ultimately decided on doing the EP instead because of the story he wanted to tell.

“From track one to track four, there is supposed to be that statement of how love can develop as a young person and how it can take many turns and lead you in places that you didn’t fully expect and then kind of, at the end, be right back where you were at the start of it all,” he said.

Mulligan has previously done an EP with his musical group, Sean Hobbes + the High Res. But, for this one, he said wanted to make sure the focus was in the right place.

“I’m not remaking the wheel or anything,” he said. “But, I did want to shift that focus for this EP over to the story and the lyrical content that was coming and linking these songs, what I felt made this project significant.”

With making this EP, Mulligan said that he had to become both the artist and the manager. According to him, an outside person would usually come in and manage whenever it was a project with the band. However, he said that balancing both provided an interesting challenge.

“To sit in both chairs and be the person who made all of the schedules and set the production contracts and everything else that was within that while also being the creative voice of saying, ‘This is the emotion that I want to convey on this project. This is the message that I want to get through.’ It’s helped me grow,” he said.

As he continues to grow as an artist, Mulligan said that he wants to take the honesty and introspection he portrays in his music into the more business side of things.

“It can be really easy to assure yourself, ‘Yeah, you are doing great. People are coming. People are paying,’” he said. “But, if you aren’t reaching the heights that you have set out to reach and you are below your standards, acknowledging that and correcting the ship is something that I think is really going to be important moving forward.”

With the coronavirus situation changing his senior year and plans to eventually tour, Mulligan said that the campaign has been something that has proved promising.

“It’s really hard to say things are going great for me right now during this but this campaign has really showed me that I have a lot of support, which is a really inspiring thing,” he said. “If my plans had to change, I’m pretty glad that it changed to this.”