Students still at Loyola quarantine in home away from home 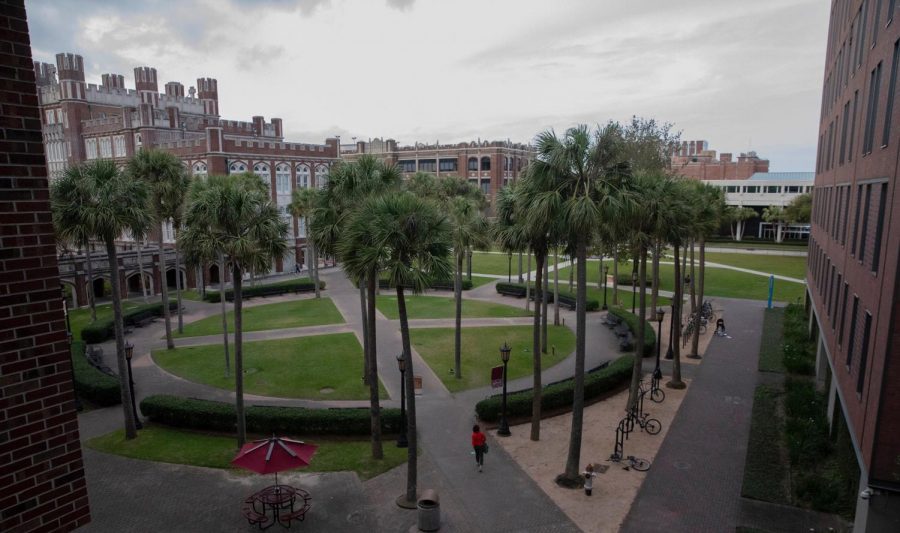 Palm Court sits outside the Music/Communications Complex below a cloudy sky in late March 2020.

For Freshman film major Izzy Prince there was no other option. Her dad has been receiving cancer treatment in Houston while her mom has been spread thin taking care of her immunocompromised boyfriend and great-aunt who is recovering from the virus. Prince had to stay on Loyola’s campus.

At first, Prince was notified by Director of Residential Life Amy Boyle that she was denied permission to stay, despite her belief that she qualified for more than one reason.

“I emailed her and said, ‘hey, I can’t go anywhere’” Prince said.

If Prince was barred from staying on-campus, she said she would have had to stay in an AirBnB for a month, which can be expensive for a college student.

Music industry and mass communication junior Ariana Bozzo said she was also surprised to receive an email that her request had been denied, especially since she had both verbal and written confirmation from her mom that she was allowed to stay.

“My mom called and she was like, ‘please let her stay, a lot of flights are cancelling, we don’t know what’s going to happen to her, I’m being held in quarantine right now,’” Bozzo said.

After Bozzo’s mom came into contact with a passenger who contracted the virus on her flight attendant shift, she was forced to quarantine at her home in Puerto Rico.

But this was only one of the reasons Bozzo said returning home would be difficult.

In Puerto Rico, Bozzo said the crisis is heightened, with limited testing abilities and the territory still weakened from past year’s devastating hurricanes and earthquakes.

According to the Associated Press, the U.S. territory responded to the crisis by implementing a curfew that ordered citizens stay home unless they have to buy groceries, pick up medications, go to the bank or have a health-related emergency. Since it’s imposition, hundreds have been cited and could face a six-month sentence or a fine of up to $5,000, the Associated Press reported.

For Bozzo, going home to Puerto Rico would mean possibly contributing to the spread of the virus in an area that she cited as vulnerable.

“I don’t know if I have the virus, it’s pretty bad here in Louisiana and I don’t want to put them at risk, or put my family at risk,” she said. “Here they are going to build more hospitals and bring more beds and all that, but in Puerto Rico it doesn’t work that easily. If a crisis starts like it is happening here right now it’s going to get really bad and a lot of people are going to die.”

Eventually, Prince and Bozzo were notified that they would be allowed to stay, where they and other students on campus have quarantined in separate dorm rooms in Buddig Hall for the past four weeks.

The campus, with all other residents halls emptied, has been absent of the usual sounds of students shuffling through the Quad according to business freshman Chamonte Greenfield. He called campus a “ghost town.”

Greenfield’s home of Brooklyn, New York sits the epicenter of the disease which is why he elected to stay on campus.

New York, which has been confirmed by BBC News to have more cases than any other country, and has a death toll of more than 7,000 that continues to grow.

According to Greenfield, staying in New Orleans was optimal in the interest of his family’s and his own safety.

While Greenfield worries about his family’s well-being, he said he has been taking it one day at a time.

“I’m always just doing a daily check-up,” Greenfield said.“ I miss my family but I know I wasn’t supposed to see them until May.”

For Prince, writing film scripts and reaching out to loved ones has eased her anxiety of being away from home.

“I get to write about certain things I’m feeling and then I just kind of put it on the paper and once it’s on the paper, it’s kind of let go,” Prince said. “Other than that, I talk to my family a ton, I talk to my best friend literally three times a day.”

Nature has been an integral stress reliever for Bozzo since she said she has been going to Audubon Park and sitting in the Residential Quad nearly everyday.

“Being outside and just feeling the sun and being on the grass has helped me a lot,” Bozzo said. “It’s more like a meditation, like I’m kind of in a retreat or something cause I’m by myself here,”

Since quarantine, Bozzo said that she has learned to appreciate time for herself and nature, which she believes she hadn’t appreciated in her time at Loyola prior to the outbreak.

Even with the strict, on-campus policies like maintaining a six feet distance from one another and having students take food from the Orleans Room to-go, all three said their quarantine experience at Loyola has been, for the most part, enjoyable. And to some students’ dismay, they all said this has partly been because of changes in the Orleans Room’s food offerings.

While cases continue to rise in New Orleans, they all said they feel safe staying at Loyola.

“My family was really freaking out but I was like, ‘listen I stayed on campus where there are only like 20 people, and we’re all really young, and we also have Ochsner hospital, they are working with Loyola for the people who are still here,’” Prince said. “We can see them whenever if we don’t feel good, so I feel really safe with that.”

Bozzo stressed the importance of contributing to the solution and making the best out of unfortunate situations.