Out of a job but not unemployed: Many in Louisiana still wonder if they qualify for state aid 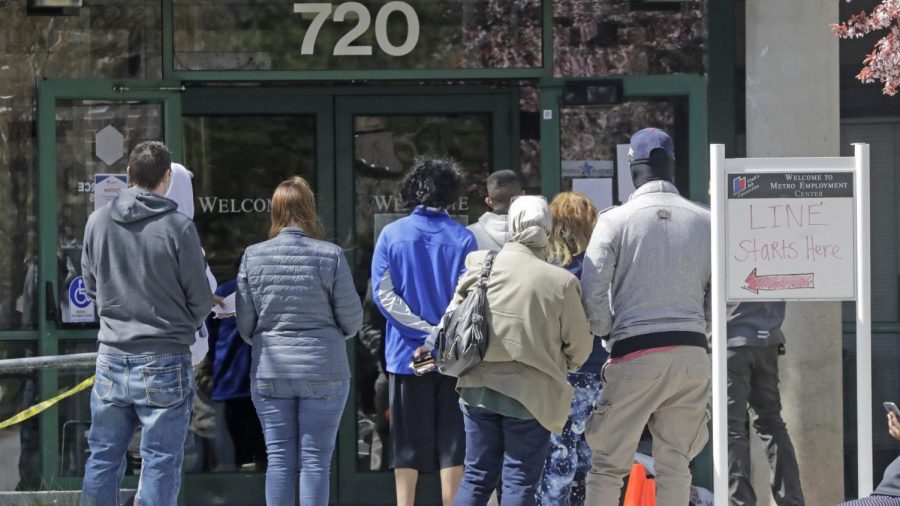 People line up outside the Utah Department of workforce Services Monday, April 13, 2020, in Salt Lake City. Congress, the Trump administration and the Federal Reserve have mounted the largest financial intervention in history a full-scale drive that includes mandating sick leave for some, distributing $1,200 checks to individuals, allocating rescue aid to employers and expanding unemployment benefits to try to help America survive the crisis. Yet those measures are only temporary. And for millions of newly unemployed, they may not be enough. (AP Photo/Rick Bowmer)

Louisiana has finally received federal funds to pay unemployed workers an extra $600-a-week in the wake of the COVID-19 pandemic, but many service workers who have filed for unemployment with the state don’t know if they will ever see this money.

The $600 checks will be doled out on top of the state unemployment benefits, which max out at $247-a-week, starting today, April 13. This aid comes after a historic record of 6.6 million Americans filing nationwide last week and 227,000 unemployed Louisianaians filing between March 1 and April 4, many of whom don’t know if their filings have been approved.

Kendall Wainwright, a philosophy junior at Loyola, used to put in 32-hour weeks at a local tie and apparel shop in Uptown. Now, she said her days are spent holed up inside, waiting to see if an unemployment check will come.

“It’s hard because I am from here, but I am on my own now,” Wainwright said. “I have rent and bills and stuff that I can’t run away from.”

Initially, Wainwright’s store remained open through St. Patrick’s Day, before reducing its hours. When that happened, she applied for unemployment with reduced hours, a process she said was not easy.

“Applying for unemployment was impossible over the phone and nearly impossible on the website. It took three hours to load through all the slides on the website because it was getting so much traffic,” Wainwright said.

She was approved, later receiving two checks for around $70 from the state for the weeks she worked part-time.

But since her store closed, Wainwright’s manager said the store would keep paying employees, making her no longer eligible for unemployment benefits or the $600-a-week checks that will roll out starting Monday.

Wainwright said she has yet to receive a check from her employer for the weeks since the store closed.

“We will get paid allegedly. I won’t know until two weeks after I last worked. It’s very uncertain,” Wainwright said.

Like Wainwright, Andi Robinson, mass communication sophomore, is unclear about her financial future. After the church daycare she worked at closed, Robinson filed for unemployment online. That was nearly three weeks ago. She has yet to hear back about her filing.

“It’s kind of a little bit worrisome,” Robinson said. “I have money thankfully, but it’s sort of like ‘How long are we going to be like this? How long am I going to go without getting a check from work?'”