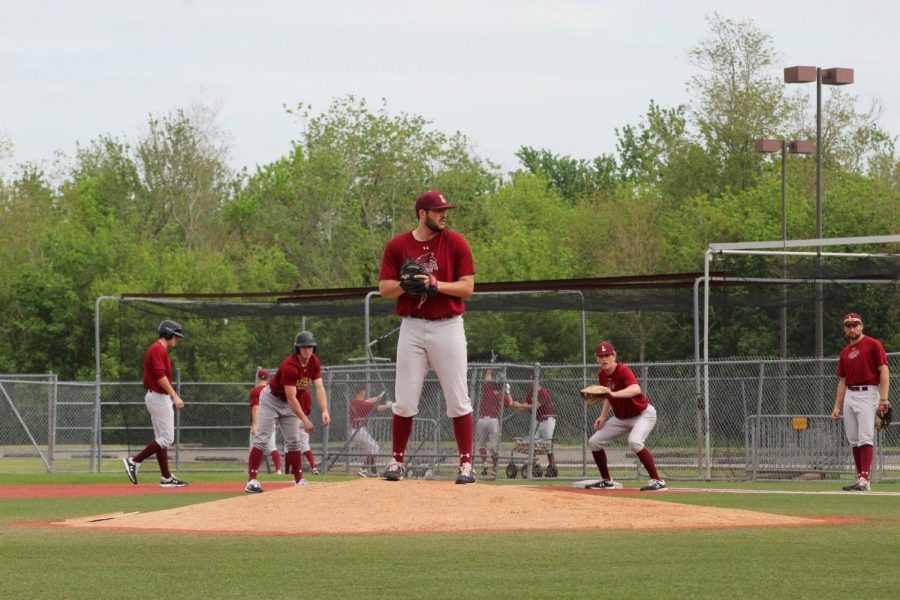 The Loyola Wolf Pack baseball team improved its record from last season despite a new set of coaches, according to loyolawolfpack.com

Under first-year head coach Jeremy Kennedy and assistant coach Steven Bruce, the team, as of early March, is over a third of the way through its season with a record of 17-9, racking up a 6 win improvement compared to last season’s midseason record at 11-15, according to loyolawolfpack.com

With a new set of coaches, the team’s mindset has changed, according to third baseman Payton Alexander.

“We don’t dwell on the past,” Alexander said. “Mistakes are going to happen.”

Junior second baseman Brandon Duhon was named top 3 in stolen bases in the National Association of Intercollegiate Athletics this season and attributed part of his success to Coach Kennedy.

“All of the practice reps that we have done has really paid off, and it shows,” Duhon said.

Junior pitcher Wes Anderson said both Coach Kennedy and Coach Bruce brought a game plan to Loyola for the season and according to Anderson, the team is following that plan well.

Freshman pitcher Andrew Riddel seconds Anderson and Duhon’s remarks and recognized the quality of coaching he’s received. Riddel said both Kennedy and Bruce are the most knowledgeable coaches he’s ever played for.

“Coach K. and Coach Bruce have held us accountable for our actions on and off the field and task us everyday with handling ourselves and bodies as professionals,” Alexander said.

Transfer students Brandon Duhon, Wes Anderson, Arron Davis and Brett Fisackerly have had a positive impact on the team in addition to their coaching staff, according to loyolawolfpack.com.

Duhon has a .359 batting average with on base percentage of .514 while also having stolen 34 bases, which is good enough to be in the top three in the nation, according to loyolawolfpack.com.

“Brandon Duhon has been one of the best base stealers in the country to this point of the season,” Kennedy said.

Duhon said his biggest personal goal for his baseball career is to be the best teammate he can be.

“Besides [being a good teammate], breaking the stolen base record doesn’t sound too bad,” Duhon said.

Duhon is on track to beat the stolen base record for the Southern States Athletic Conference, which is currently 64.

However, Duhon is just one of the Loyola baseball team’s powerhouses, for Wes Andesron has taken over as one of the top pitchers in the Loyola rotation posting a 2.68 earned run average and 4-1 record so far this season, according to loyolawolfpack.com

Coach Kennedy only had good things to say about Anderson.

“On the mound Wes Anderson is leading the way with a consistent approach game in and game out,” Kennedy said.

Loyola’s catchers are also vital to the game, according to Kennedy.

“Behind the plate, we have a duo with Gabe Trastoy and Landon Trosclair really controlling the game,” Kennedy said.

“I don’t see just one leader when I look at our roster,” Riddel said. “I see a bunch of players leading the team.”

Both Duhon and Anderson said great things about Loyola’s baseball team upon having transferred.

“My teammates have been nothing but great to me as they have welcomed me with open arms,” Duhon said.

Anderson shared Duhon’s sentiments and said adjusting to a new team is a difficult process but has nonetheless felt like home.

Kennedy commented on the strengths and weaknesses of his team, marking one weakness as a need to become more consistent.

“We have come a long way in a short amount of time, but we still have a long way to go,” Kennedy said.

Despite this shortcoming, the Wolf Pack has succeeded at base running and strike throwing, Kennedy said.

“Our end goal is just to maximize our potential as a team,” Kennedy said.

Kennedy said he has goals to make the conference tournament.

The Wolf Pack will be heading back on the road this weekend to play the Brewton-Parker College Barons. The team’s next home game will be on March 16 when they face off LSU Shreveport.