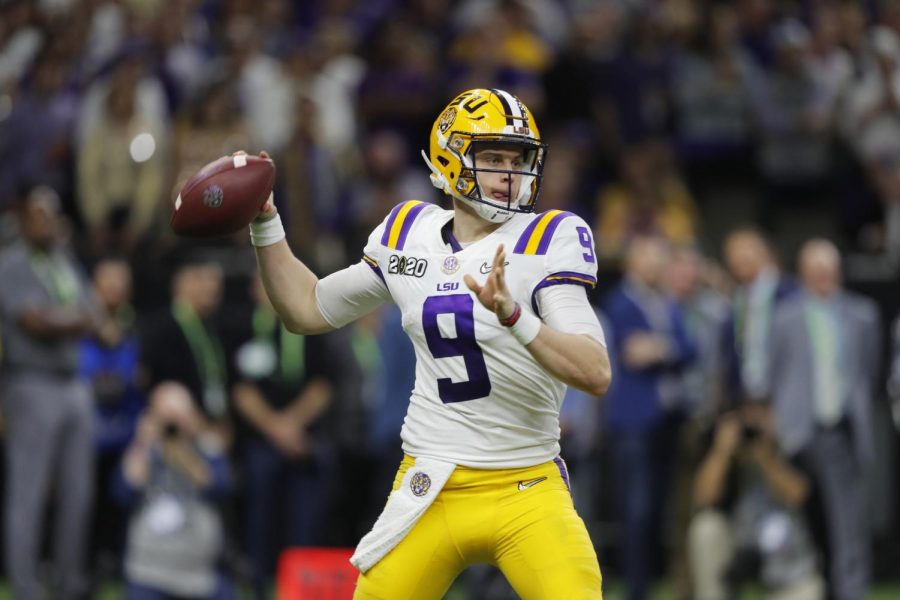 FILE - In this Jan. 13, 2020, file photo, LSU quarterback Joe Burrow throws a pass against Clemson during the second half of the NCAA College Football Playoff national championship game in New Orleans. The Cincinnati Bengals chose Burrow with the first pick in the NFL draft Thursday, April. 23, 2020. (AP Photo/Gerald Herbert, File)

In a draft expected to shatter television ratings, the team which dominated 2019 stole the spotlight.

Led by Heisman Trophy winning quarterback Joe Burrow, the 2019 LSU Tigers scored more points than any other team in FBS history on their way to a 15-0 season and the school’s first national championship since 2006.

Outside linebacker K’lavon Chaisson was selected 20 overall by the Jacksonville Jaguars. A first team all conference selection, Chaisson wore the prestigious NO. 18 for the Tigers, a jersey given to players who demonstrate outstanding leadership and work ethic within the program.

The Minnesota Vikings selected wide receiver Justin Jefferson with the 22 pick. Jefferson, who came to the Tigers rated as an ESPN 0 star recruit, set an LSU school record last season with 111 receptions.

The Baltimore Ravens selected inside linebacker Patrick Queen 28 overall, adding the speedy 6’1” defender to a defense which ranked 4 in the league in DVOA in 2019.

The run of LSU players being drafted helped the South Eastern Conference set the record for the most first round draft pick from a single conference with 15 players selected. Alabama had 4 saw four of its players get drafted, Georgia and Auburn each had two, and Florida and South Carolina had one a piece.