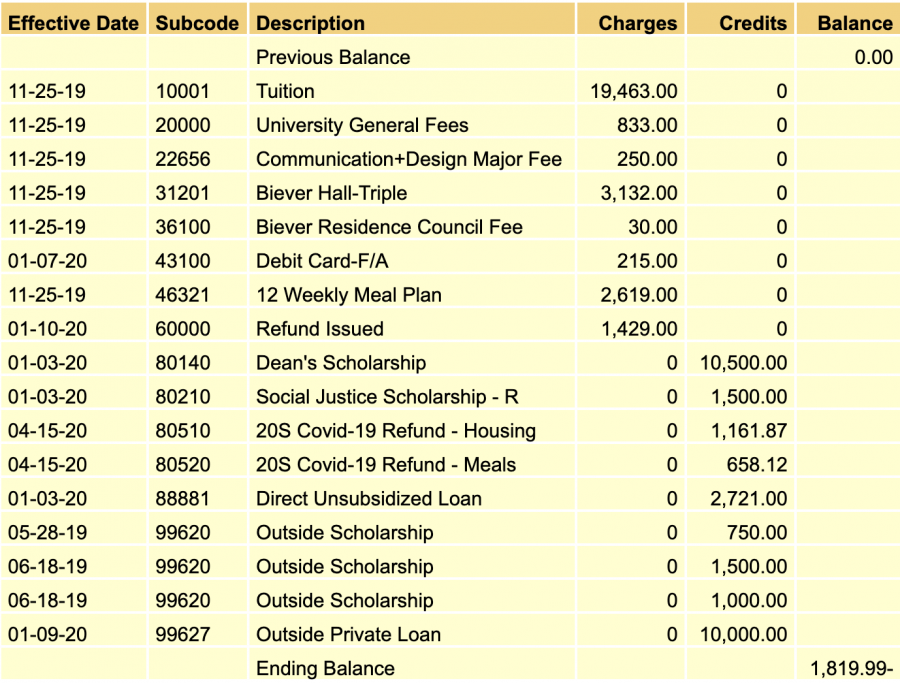 A student's LORA account after their housing refunds had been credited to the account. Loyola made the decision to offer prorated housing and meal refunds and credits as soon as they knew they were closing.

The line outside The Market stretched all the way through the Danna Center on the evening of March 11. Students waited in the line for up to an hour, filling trash bags with chips and candy, eager to spend their remaining Wolf Bucks before it was too late.

Only hours earlier, University President Tania Tetlow had made the announcement few anticipated: classes would move online for the remainder of the semester. Still, at that time, the plan was for the university to remain open, allowing students to choose whether or not they would stay in campus housing, though those who could return home were encouraged to do so.

And because Loyola planned to remain open, maintaining the staff necessary to do so, university officials made the announcement that no refunds would be offered for student housing or meal plans, according to Senior Vice President for Enrollment Management and Student Affairs Sarah Kelly.

So students rushed to spend Loyola’s dining dollars as quickly as possible.

“Word started spreading that we needed to spend them right away as the school’s facilities were about to close,” Noelie Zeichik, psychology senior said. “We went to the C store and went crazy and got about $300 or $400 worth of snacks.”

But the growing danger of the COVID-19 in New Orleans soon forced a change of plans for the university.

“Once there was community spread in New Orleans, we required everyone to return home, unless they were international students unable to return to their home country, had nowhere else to go, or had family member suffering from COVID-19 and thus needed to stay at Loyola,” Kelly said.

With the campus now practically closed, Kelly said university officials made the decision to provide prorated credits and refunds to students.

“We were actually ahead of the national trend in making this decision once we realized that we could not remain open,” Kelly said. “We made the decision to offer prorated refunds because, even though doing so represented a huge financial impact for us, it was the right thing to do for our students.”

And that financial impact is close to $2.5 million, according to Kelly. She said the university is still hoping to finish the fiscal year with a small operating surplus, as planned.

“For this year we are going to be okay — not great — but okay. We have committed to living within our means for a few years now, and we were on track for a balanced budget this year,” Kelly said.

The credit amount is based on the last day of the week the student officially moved out of campus housing.

Seniors who do not owe a balance will automatically receive a refund to the address on record.

Students who would prefer a refund over a credit can request one on LORA.

The university is also posting prorated meal plan credits to student accounts. Those credits are also based on the last day a student checked out of campus housing. Commuter student refunds are based on the remaining balance as of March 16, 2020.

Any remaining Wolf Bucks will automatically roll over to the fall semester, but will need to be used by December 31, 2020.

And when it comes to those precious Wolf Bucks, the opportunity to get a refund is one Brailey Penny, mass communication junior, would have liked to know about sooner than she did.

Penny, who still had Wolf Bucks in her account, remembers reading in an initial email that no refunds or roll overs would be offered. On her last day on campus she spent almost $300 in Wolf Bucks buying frozen sandwiches and croissants at Starbucks.

“Realistically, I’m going to be unemployed for a while because things aren’t opening here, so it would have been nice to have that $300 to have in my bank account so I could do things like pay my car insurance and get food if I needed it,” Penny said. “So when I saw that, I was really frustrated.”

Had she known refunds were a possibility, she said she would have tried to get her Wolf Bucks money back. Still, she said she was happy to see the refunds for her housing and parking pass in her LORA account, and will be using them to make it through the summer.

“My plan for the refunds is to kind of live on it over the summer because I don’t know if I’ll be able to get a job or not so that $3000 is going to pay my car insurance.” Penny said.

While she understands that quick decisions were necessary, she said she is still frustrated.

“Money is something that is really tight for a lot of students, including myself,” Penny said. “That is something we really needed to know.”

But anger is not the primary response Kelly said the university has received since making the announcement.

“Our parents were more likely to ask how they could help than demand refunds. It was pretty beautiful,” Kelly said. “I remember reading something on the parents’ Facebook page where parents were wondering if there would be refunds and several parents reminded the group that they were sure that we were thinking about everything but were knee deep in the midst of trying to close campus.”

Kelly said some parents even suggested that Loyola make it possible for students to donate their refunds so they could help others with more need.

“I know a lot of us appreciated that grace at a moment when it was most needed,” Kelly said.

In hindsight, Kelly said she wishes the university would have told students not to worry about the Wolf Bucks, but the university’s contract with food vendor Sodexo meant it took time to negotiate details.

As for long-term implications of the refunds, Kelly said next year is uncertain.

“We were on track to have another bumper crop of first-year students; retention from fall to spring was the highest in the university’s history… things have been looking up for Loyno,” Kelly said. “Now we are planning for contingencies.”

She said she hopes all students will return to Loyola and emphasized how hard faculty, staff, and administration are working during these challenging times.

“We are a family here at Loyola — that doesn’t change just because we are apart,” Kelly said.