Review: “Extraction” is an adrenaline-fueled hit and miss 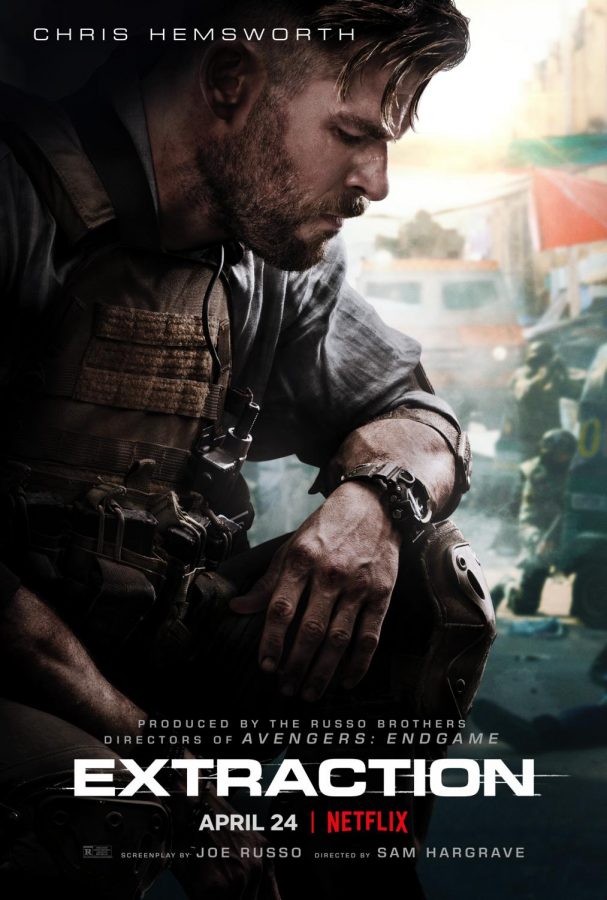 Netflix’s new action film “Extraction” impresses with its intense action performances but otherwise falters in the face of a generic, incoherent plot.

The film follows brutally efficient but burned out Australian mercenary Tyler Rake, played by Chris Hemsworth, as he reluctantly accepts an extraction assignment: rescuing Ovi Mahajan, played by Rudhraksh Jaiswal, the teenage son of an imprisoned Mumbai drug lord who has been kidnapped by his father’s Bangladeshi rival Amir, played by Priyanshu Painyuli.

Tyler is initially in it for the money and also has a death wish, the circumstances around which are hinted throughout the film. But as he runs and guns throughout the streets of Dhaka, Bangladesh with his precious cargo, he finds himself on a quest for redemption.

“Extraction” marks Sam Hargrave’s directorial debut after serving as stunt coordinator for several Marvel movies. Much like “John Wick” director Chad Stahelski before him, he wisely serves up his impressive mastery of stunt work that recalls his storied credentials. A highlight of the film is a 12-minute one shot action sequence involving Rake and Ovi being pursued by Saju, played by Randeep Hooda, a colleague of Ovi’s father who undertakes his own extraction plan. Evoking the one shot excitement of recent war film “1917,” it is simply exciting and keeps the audiences riveted.

Based on the graphic novel “Ciudad,” which was written and adopted by “Avengers: Endgame” co-director Joe Russo for this film, “Extraction” makes a concerted effort to portray Rake as a character with enough depth. Granted, he possesses the formulaic action hero persona: deadly efficient, weary swagger, has a secret. During one scene, Hemsworth’s character inevitably kills a henchman with a certain tool that brings to mind a certain hammer wielding character from the Marvel movies.

But at the same time, Tyler has a soft side, especially when it seems like the extraction mission is a lost cause and everyone urges him to kill Ovi out of mercy. This facet of his complicated personality is always interesting to watch in the film’s calmer moments when Tyler doesn’t kill someone.

However, it’s worth noting that Hemsworth’s character is an odd man out in the film’s south Asian setting. A white guy blasting through a sea of brown, expendable henchmen in the streets of Dhaka? If no one finds it problematic to a certain extent, nobody will. One can argue that Tyler was just doing his job, and that his unlikely chemistry with his precious cargo makes up for all the surrounding unease.

Consequently, the faulty premise of “Extraction” ensures the fact that the warring drug lords of India and Bangladesh could have had a far more interesting way to hash out their differences, and in doing so provides a potentially more interesting crime drama that echoes the works of Scorsese. Or the film could have been set in Europe, which would make the ensuing proceedings harmless. But then again, it makes no sense beating a dead horse, as “Extraction” is clearly meant to be an escapist film. Nevertheless, it makes one wonder what could have been.

With an action film like “Extraction” comes one-dimensional villains that serve to spout exposition and provide cannon fodder for Tyler. The Bangladeshi drug lord Amir is hyped as his country’s Pablo Escobar, and he does have his finger in the pulse of Dhaka’s government. But he’s just not menacing enough, and therefore becomes a forgettable antagonist. A surprise turn from David Harbour, who plays Tyler’s former colleague, goes nowhere, wasting his acting chops and leaving a massive plot hole in the process. But then again, who comes to watch “Extraction” looking for character development?

All in all, the film tries its best to be as somber in tone as possible. While it has a somewhat desirable effect on gravitas, it ends up becoming numb to its violent scenes. Moreover, the usually charismatic Hemsworth finds his acting abilities underutilized. At least “John Wick” as well as Michael Bay’s latest Netflix film “6 Underground” had some comic relief. But there’s no denying that “Extraction” is some hard, fast escapist fun. If one finds genuine thrill in watching bad guys get expertly beaten, stabbed, or mowed down, then this is the place for any discerning action fan.